The Toyota Corolla is an undisputed heavyweight among small cars. It has a seemingly permanent place on the list of the Top Ten Bestselling Nameplates. It’s reliable, fuel-efficient, and affordable, and it’s been around forever—well, 48 years, anyway. During that time, Toyota has sold nearly 40 million Corollas.

But the small-car segment is changing. New players are arriving, and they want to take a bite out of the Corolla’s sales. Enter Kia and its quirky, boxy Soul. 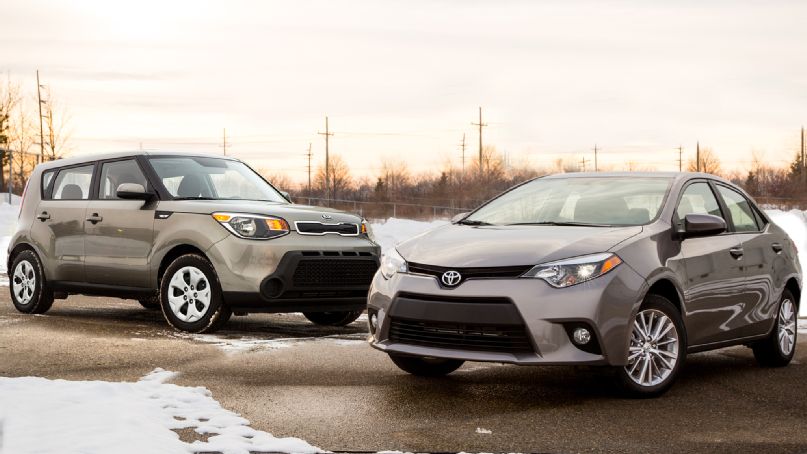 The Corolla and the Soul could not be more different. The Corolla is a traditional compact sedan. The Soul looks almost like a small crossover. But both cars have the same purpose, are competing for the same young and hip customers, and both were just redesigned for the 2014 model year. Why not pair them up to analyze different approaches to the small-car segment?
For our comparison, we selected a 2014 Corolla LE Plus, which cost $21,870, to face off against a very basic Soul, which cost $15,610. Though that’s a significant gap in price, $6260, it didn’t handicap the Kia. “You’re getting way more coolness than the price would indicate,” said deputy editor Joe DeMatio.

We tested the Soul and the Corolla as winter settled in around Automobile Magazine’s base in Ann Arbor, Michigan. Unlike some of our tests, which feature high-speed loops of the Nurburgring Nordschleife or exotic jaunts on the twisty roads in Southern France, we simply drove the Soul and the Corolla normally, the way typical compact car owners would use them. We did errands. We drove to work. We went shopping and out to eat. We dealt with cold and snow. It probably sounds a lot like you what you did in mid-December.

After several weeks, we reached a verdict: The Soul came out on top. We liked how it looked, and we liked how it drove. It felt newer, more innovative, and it had significantly more space. Even though the Soul was not a traditional compact sedan, that proved to be a strength, as we liked its unconventional approach.

“Being a hatchback, the Soul has much of the appeal of a crossover,” said associate web editor Jake Holmes.

These two cars paint a striking picture of the establishment (Toyota) versus the spunky up-and-comer, Kia. The Korean brand is trying to be a trendsetter, and that shows in the Soul. Conversely, the Corolla comes off as staid and boring. It’s a new car, but we felt a sense of déjà vu.

“This car could have come out ten years ago, and I wouldn’t have been surprised,” Holmes said. “It’s everything you would expect and nothing more.”

Neither car had a decided edge in the looks department. In fact, we rather liked them both. The Soul’s design was only lightly updated for the 2014 model year, and it remains one of the most recognizable boxes on wheels. The Corolla is much curvier and more creased than the model it replaces. It’s a contemporary look, and like the Dodge Dart and Ford Focus, the design attempts to make the Corolla appear larger and more upscale.

Room to Roam in the Cabin

Slipping inside, we immediately felt at home in the Soul. It was taller and wider than the Corolla, and that made for more headroom, more leg room, and more interior volume. With the rear seats folded, the Soul provides 61.3 cu ft of cargo space, or 24.2 cu ft with the seats up. You could easily get a decent-sized piece of furniture back there. In fact, with the seats down, the Soul has a greater cargo volume than the Sportage, which Kia markets as a crossover.

The Corolla also had a good amount of space (its passenger volume of 97 cu ft was fairly close to the Soul’s 101 cu ft). But it felt less spacious due in part to its fat, slanted C-pillars, which hurt visibility and were a problem when parking in tight areas or merging onto the expressway. Yes, they make for a cool roofline, but it’s at the expense of rear-seat headroom. We did like the view out the front, however, as the wide windshield and low cowl afford great forward visibility. The Corolla’s trunk, which measures 13 cu ft, is also spacious. A golf bag would fit back there easily, and it could handle a week’s worth of groceries. We had no beef with the Toyota’s cargo hold, we just preferred the versatility offered by the Soul.

The Corolla’s substantially higher price tag was reflected in the materials found in the cabin. The Corolla felt like a much nicer car on the inside than the Soul. There was fashionable stitching and trim across the dashboard, a head-up display, a sporty tri-gauge cluster, and the use of color throughout the cabin was tasteful. The options, like push-button start, a 6.1-inch touchscreen, and the Entune premium audio system (all part of the $1510 driver convenience package), made the Corolla seem more upscale. It outshined the Soul, which had cloth seats, hard plastics, and required use of a key for entry. Although the Soul had few of the Corolla’s bells and whistles, we didn’t penalize it for that because it can be optioned up. (The top-trim Soul Exclaim comes with LED lights, UVO connectivity, and a rear camera, for $21,095.)

Once in motion, however, the Corolla’s polish wore off. Its harsh and noisy ride dominated the driving experience, even though the Toyota’s powertrain has some positives.

“On first impression, everything looks more upscale than you'd expect, like the classy dash design, well-finished steering wheel, and nicely weighted buttons and knobs,” noted associate web editor Joey Capparella. “Once you get past this, though, there's a sense that the whole car is slightly hollowed-out; the seats are thinly padded, the ride is harsher than you'd expect. It's pretty nice on the surface, but the cheapness is still there.”

We found the Soul to be surprisingly quiet for the segment, even when cruising along Interstate 94 at 70 mph. The four-cylinder is a bit raspy, as most are, but it wasn’t offensive. The inputs—throttle, brakes, and steering—were responsive, and we felt connected to the road. “This is the first Kia I’ve driven that has good steering weight and overall dynamics,” associate editor David Zenlea said.

The suspension, which uses MacPherson struts in front and a beam axle in back, is taut, but not harsh. It’s a big step forward from the first generation. Though the ride could still be a little rough over Michigan’s pockmarked roads, it was not nearly as severe as in the Corolla. It took much more to ruffle the Soul, which felt planted and solid.

Plus, the Soul offers a solid value (and warranty), for which Kia has become known. For less than $16,000, you get Bluetooth, cruise control, three months of Sirius/XM satellite radio and a USB port. “You really do get a ton of car with the base Soul,” Capparella said.

In the end, we weren’t fooled by the Corolla’s niceties. It’s an average car with some above-average features. But the Soul is more of a total package. It does have flaws, yet it still won us over with its funky styling, solid driving character, spacious cargo hold, and its competitive pricing structure. The Soul gives you a lot of car for not a lot of coin. It might sound trite, but the Soul did indeed have a soul. That’s something the Corolla lacked, and that’s why Kia won the day in this test.