It shouldn’t have worked so well — but it did, big time. For the 2013 model year, Subaru introduced what basically amounted to a lifted compact hatch with black wheel-arch cladding, roof rails, and distinctive wheels, but crucially, called it an SUV. The Impreza-based XV Crosstrek went on to become the third-best-selling Subaru in 2014, its 70,956 units sold overpowering the Legacy and even non-WRX/STI Imprezas.

Introducing a production-spec version of the Kia Trail’ster concept that debuts at the 2015 Chicago auto show is a no-brainer, and it’s surprising the crossover isn’t already in showrooms, sharing space with the Sportage. Rumors of a Soul-based crossover have swirled as far back as 2011, and some buyers already think of the Soul, a compact hatchback only offered with front-wheel drive, as a crossover. 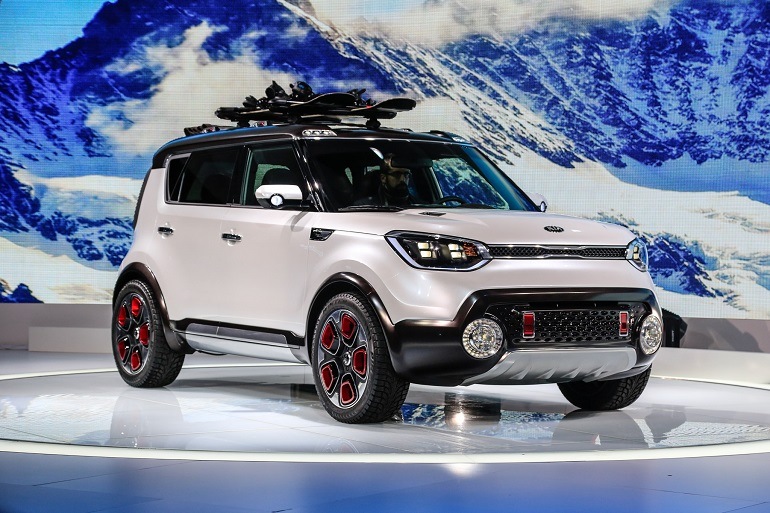 The 185-hp turbocharged 1.6-liter I-4 in the Kia Trail’ster concept might alleviate at least one of the Soul 2.0’s shortcomings: relatively slow acceleration considering its middling fuel economy of 23-24/31 mpg city/highway. We’ve tested the Soul; the 164-hp naturally aspirated 2.0-liter I-4 reached 60 mph in 8.4 seconds. The 130-hp base engine is no more efficient, and is, of course, is slower. Then again, we’ve tested the popular Subaru XV Crosstrek with a CVT automatic reaching 60 mph in a leisurely 10.0 seconds. Transformed or marketed as an SUV with available all-wheel drive, the Kia’s numbers suddenly become competitive, and, with a Trail’ster production crossover, Kia could stop calling the Soul a hatchback on its media site yet a crossover on its consumer site.

The Trail’ster concept looks the part, with a ride height 2.5 inches higher than the regular Soul’s and plenty of rugged crossover styling cues all around, plus a “beefy gearshift lever,” in the words of Tom Kearns, the chief designer at Kia’s U.S. design center. The concept’s turbo-four and electric all-wheel-drive system combo is neat (good for 220 hp and 285 lb-ft of torque), but not necessary to keep existing Soul owners upgrading to a vehicle that could, with all-wheel drive and the Soul’s “Whole Shabang Package,” nearly touch $30,000 before any regional incentives. The Whole Shabang Package adds HID headlights, speaker lights, panoramic sunroof, navigation on an 8-inch display, Nappa leather seat trim, heated front and rear seats, and cooled front seats.

The Soul has turned into Kia’s second-best-selling vehicle, behind only the Optima midsize sedan in 2014. Sacrificing a few Soul and Sportage sales for a lifted, more SUV-stylish version of a compact hatch seems like a long-overdue and potentially profitable idea. Just ask Subaru.

At the 2015 Chicago auto show, Michael Sprague, executive vice president of Sales and Marketing for Kia Motors America, claimed that whether a production version of the Trail’ster concept is built comes largely down to consumer and media feedback (if the decision hasn’t already been made). So tell us what you think: Would a Soul-based crossover be a big mistake, or should Kia get it in dealerships tomorrow? How much would you pay for a Soul-based crossover?