This entry was posted in Clean Technica on September 19th, 2015

Clearly, one of the biggest Germany EV sales stories this month (well, I think the biggest) is that the Kia Soul EV crushed every other model, surging far into #1. It was like Usain Bolt against the fastest women in the world. That propelled the car into #5 for the year through August. With Germans very intent on buy cars from German manufacturers, and seemingly preferring plug-in hybrids to full electrics, this seems rather odd, no? Well, word on the street is that most of those Souls (pun intended) are only immigrating to Germany for a short stay before immigrating further north to Norway. (Note that the Soul EV took the #3 spot in Norway in August, but the vehicle may be cheaper and more accessible down in Germany.)

For the year to date, things get really interesting. “Signs of a extremely balanced market, the leader has only 11% share (lowest in the world) and is only 1% above the #4 (also lowest difference in the world), making this the only market where four different models are openly fighting for the top spot with only four months to go,” Jose Pontes writes.

“Oh, and don’t forget that Kia and Tesla are not that far off, so a lot can happen here.”

Indeed. If the Soul EV has a few more months like August, and if Tesla sends a surge of Model S sedans over to Germany in one of its big, end-of-year delivery pushes, we could see a serious shakeup at the top.

As it stands now, the Mitsubishi Outlander PHEV is just 8 units ahead of the Volkswagen Golf GTE, and 152 ahead of the #3 Audi A3 e-tron (which, I think it’s worth noting, is the same vehicle as the Golf GTE but with a different cover, and was actually #2 in August). The BMW i3 is just 78 units behind the A3 e-tron for the year through August (but fell to #7 in August), and then the Soul EV and Model S are sitting just 159 and 300 units behind it, respectively, with the Model S working its way up the table a bit by taking #3 in August.

I have to say, I think this is the most exciting EV market to cover.

Even beyond these top 6 models, we don’t see a steep drop-off anywhere like is typical in other markets. It’s more of a staircase-like decline than a cliff-like decline. Here are the full charts and table for more details: 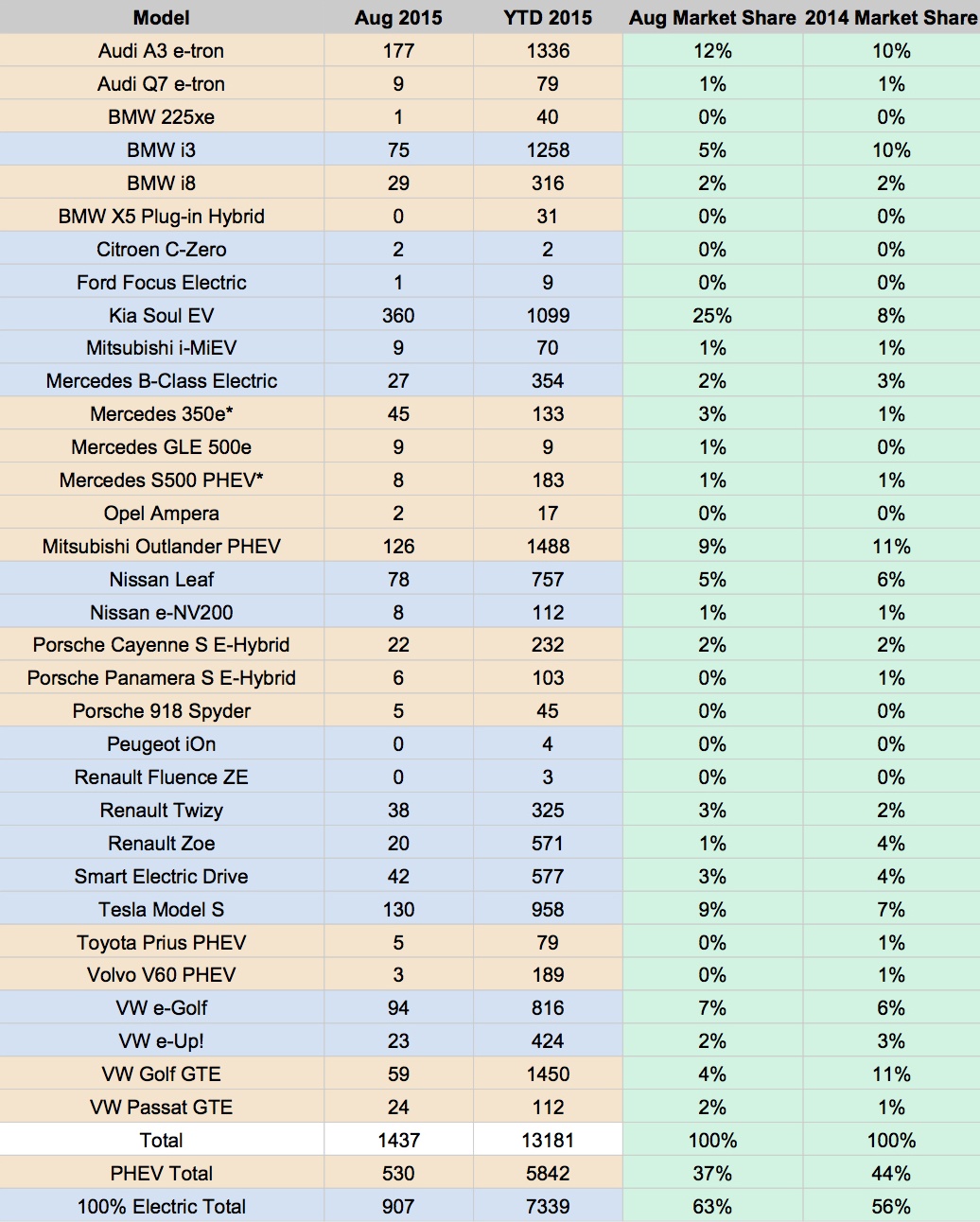