MONT-TREMBLANT, QC — This may seem like a shot out of left field, but I’m beginning to believe that Kia might have ambitions on Mercedes. Or, if not Mercedes, then perhaps Lexus. OK, maybe just Infiniti or Acura. Whatever the case, methinks the era of Kia as the most bargain basement of brands is rapidly coming to a end. Indeed, I would not be surprised if, deep in Kia’s South Korean headquarters, they’re hatching a plan to launch an in-house boutique suite of luxury bolides.

The reason for this sudden insight is not, as you might be thinking, the company’s recently-released K900 uber-sedan with its obvious luxury pretensions. Nope, what’s got me talking about Kia in the same breath as Mercedes and Lexus is the comparatively modest Sorento CUV. Newly re-engineered for 2016, the Sorento shares a common exterior design motif with the rest of the Kia lineup restyled by ex-Audi chief designer Peter Schreyer. It’s bold where the previous iteration was timid, sporty rather than placid and generally just a little more in your face than the outgoing crossover. 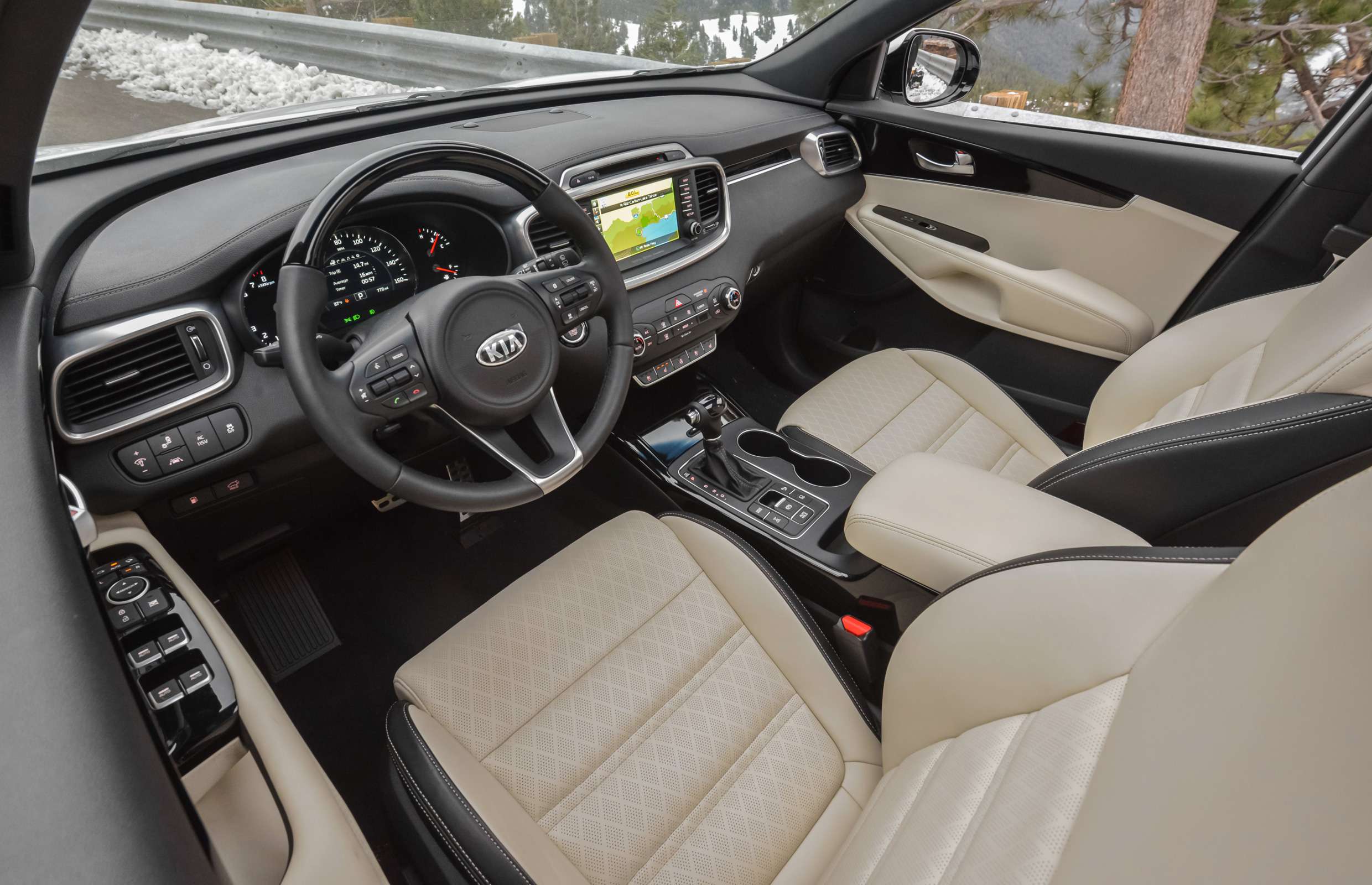 But flamboyant fender flares do not a Mercedes competitor make. For that, you need all manner of interior hedonism, technological gadgets out the ying-yang and then, just for that last bit of hedonistic credibility, a few key convenience features that surprise and delight. Which is, almost to a T, the very description of the new Sorento’s interior.

The Nappa leather, part of the SX+ package, is simply as soft as glove leather gets. The entire dashboard — and most of its controls — is also pleasing to the touch. The trim is classy piano black, the switchgear uncomplicated and the infotainment system one of the nicest in the biz. Kia even took the time to engineer a superior lower door seal, the better to prevent salt getting onto the carpet or soiling the hem of that expensive Loro Piana cashmere coat that you wear on those rare occasions when presentation is as important as purpose. Kia’s build quality may not yet be to Audi’s standards but Mercedes wishes its GLK were so opulent. 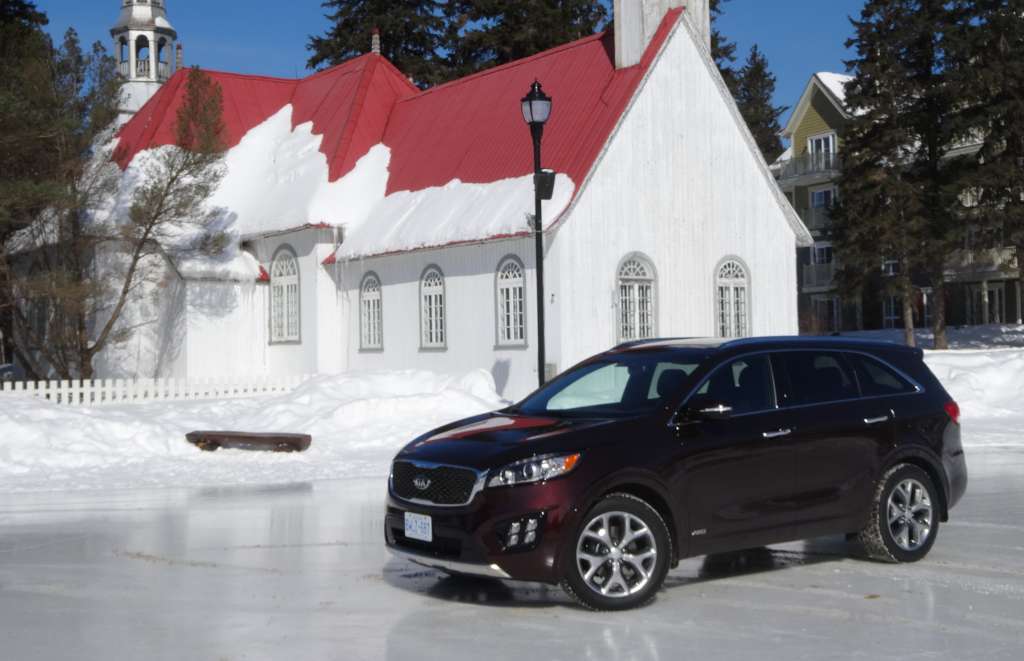 Nor is this the only nifty trick the new Sorento has up its sleeve. The top-of-the-line SX model, for instance, has a smart rear hatch opener. Like all SUVs/minivans with power liftgates, you can Open Sesame by holding the keyfob button a few seconds. But, what if the key is deep in pocket or purse and/or your arms are stuffed with groceries and kids? Well, then, just stand within a metre of the rear bumper for three seconds and, after a few beeps and taillight flashes, presto, the rear hatch magically opens itself. Really, no fumbling for key, none of that stupid Ford waving-the-foot-under-the-rear-bumper hokum; just stand there and the Sorento’s trunk will open all by its own self. And, no, just walking by doesn’t have it popping open inadvertently.

There’s more. There is, for instance, a household 110-volt electrical outlet in the rear seat area so my MacBook Pro was always charged, the rear seats (if you’ve opted for the seven-passenger V6 model) fold completely flat and it is worth noting that the Sorento’s all-wheel-drive system offers a Subaru-like “locking” function for the centre differential. The mid-sized Kia is one of the most comprehensively equipped sport utes on the market today.

Nor does the goodness diminish when you’re actually behind the wheel of the Sorento. We didn’t get to test the $27,495 base version’s 185 horsepower, newly direct-injected, 2.4-litre four-cylinder, but both the 2.0-litre turbo four and 3.3-litre V6 that power the upscale versions are stellar. In fact, the only surprise in the powertrain department is that it is the two-litre turbo, ostensibly the mid-range option in the Sorento lineup, that is the star of the show. Oh, the V6 is fairly smooth and boasts more horsepower — 290-hp for the V6 versus 240 for the 2.0-litre T-GDI — but it is the turbocharged four that is torquier (260 pound-feet versus 252 lb.-ft. for the V6). It feels noticeably punchier and confident about passing; said maximum torque is produced at a lower rpm — an incredibly grunty 1,450 rpm for the 2.0T versus a needs-to-be-spun-hard 5,300 rpm for the V6. It’s also smoother. Indeed, on the open road, the 2.0T proves more responsive, the Sorento’s (roughly) 1,875 kilogram curb weight seemingly no hindrance to the little blown four. Noise, vibration and harshness are reduced compared with the V6 and, because it is so powerful at low rpm, the 2.0T also feels less “busy” than the V6, the engine revving less and there being less hunting of gears by the automatic transmission.

Furthermore, for some reason the 2.0L’s six-speed tranny is different from that of the V6, the latter being the more robust of the two. That means the V6 has a greater towing capacity — 5,000 pounds versus the 2.0-litre’s 3,500 lbs. — despite having less torque, the usual determinant of towing capacity. Indeed, I suspect that the only reason that the 2.0 T-GDI is not being marketed at the top of the Sorento range — again, it really is superior to the V6 in every regard — is that advertising the 2.0 Turbo as the topflight engine choice while then admitting it had a lower towing capacity than the V6 might prove confusing to consumers. My recommendation to Kia would be to either upgrade the 2.0-litre four’s transmission so that the turbo was the top engine of the three or just eliminate the V6 altogether; with the 2.0L Turbo-GDI’s stellar performance mated to a suitable transmission, the V6 isn’t really necessary.

The problem this bass-ackwards engine hierarchy creates is that the best engine — the 2.0-litre turbo — is not available in the topflight Sorento, the all singing, all dancing $46,695 SX+ with seven-passenger seating. Indeed, only the V6 can be had in the seven-passenger versions of the Sorento.