Square shapes make the most interior space for passengers and cargo, always a bonus in a compact model such as Kia’s Soul. 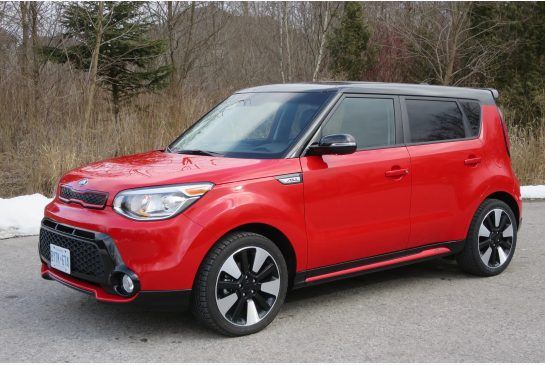 It’s not necessarily pretty, but it’s practical. Square shapes create the most interior space for passengers and cargo, always a bonus in a compact model such as Kia’s Soul. It doesn’t take up much space in the driveway, but it’s surprisingly roomy inside for its size.

The Soul starts at $17,195 for the base LX trim, with a 1.6-litre four-cylinder that makes just 130 horsepower along with a six-speed manual transmission. But the basic trim doesn’t include air conditioning. You’ll have to pay $18,995 for a stick-shift model that does, or $19,895 to add A/C with an automatic transmission to that trim.

If you’re planning on packing in passengers, I recommend the 2.0-litre engine. It makes 164 horsepower and is used in all other trim lines, starting with the EX at $21,195, up to the top-line SX Luxury at $27,495. All Soul models are strictly front-wheel drive, there’s no all-wheel drive option.

My tester was the SX Sport, at $25,995. It’s immediately identifiable by its two-tone red-and-black paint scheme. You can also get it in black-on-red or red-on-white, the only colours available on this trim.

The larger engine comes exclusively with a six-speed automatic transmission. It’s econobox-noisy on hard throttle, but it’s otherwise adequate for downtown commuting or highway hauling. Handling is quick and it’s fun to drive, although Kia is fond of a gimmicky feature, Flex Steer, which changes the steering feel when you press a button. It’s been around for a while and I notice it’s been considerably improved since its inception, back when the Comfort setting on some vehicles was so soft it felt wobbly. This time around, there isn’t much difference between Comfort and the Normal setting. I kept it in Sport, which definitely isn’t sportscar-firm but it feels the most responsive.

A short turning radius helps with tucking the Soul into tight parking spots, especially with the rearview camera that’s optional on the mid-range EX and standard on the SX.

For its size, the Soul feels substantial. The doors close with a solid thunk, the interior surfaces are soft-touch, and the fit-and-finish is excellent. It’s a considerable step up from the first-gen Soul (last seen in 2013) and from other cheap-feeling (and now discontinued) boxy models such as Scion’s xB and the Nissan Cube.

And while the interior design has just enough funky cues to be interesting, it’s not over-the-top. I love the stereo speakers stacked above the vents, especially with the bright red accents that are part of the Sport package.

Kia packs quite a few features into the Soul, especially in the upper levels. My car included heated leather seats, an auto-dimming rearview mirror, automatic headlamps, automatic climate control, power-folding mirrors, push-button start, and my new favourite feature, a heated steering wheel. Taking the Soul up to its highest level also adds a panoramic sunroof, premium stereo, cooled seats, navigation, and lane departure and forward collision warning, among other items. All Soul models also come with a five-year/100,000-km warranty on almost everything.

It’s tough to cross-shop the Soul, since little else in the segment shares its boxy body or the features in its mid- and upper-level trims. Hatch models, such as the Toyota Yaris hatchback, Honda Fit and Chevrolet Sonic, also offer far less horsepower than the Soul’s 2.0-litre unit. But if price is of prime importance, those three competitors range from $2,420 to $2,800 less than the base Soul LX, even though the output from Kia’s 1.6-litre engine is comparable to that of the Fit and Sonic.

Still, for its features, the Soul’s worth a look and a test drive. It may look like the box it was shipped in, but there’s a lot more to it than that.

ACCESSIBILITY: The high sill may be tough for some to step over

MOST INTERESTING: You can also get an all-electric version

PERFORMANCE: Definitely not snappy, but gets the job done

TECHNOLOGY: Kia’s UVO voice recognition system is one of the best

WHAT YOU’LL LIKE ABOUT THIS CAR: A roomy interior for the vehicle’s size

WHAT YOU WON’T LIKE ABOUT THIS CAR: You can’t get all-wheel drive