I, for one, welcome our new compact crossover overlords. Don’t tell anyone, but somehow, automakers found a way to trick consumers into purchasing slightly-softer, slightly taller variants of their respective compact car-based hatches. This burgeoning segment already spawned some of the funkiest and head-scratching cars on the market, ranging from the baller-on-a-budget Mercedes-Benz GLA to the handsome, devil-may-care Mazda CX-3. Of these fun-sized “SUVs,” Kia’s Soul has consistently ranked at the top of our list and the addition of a new turbocharged powertrain just sweetens the deal.

If you’re expecting the aggressively named 2016 Soul Turbo to scrape fenders with the GTI or Focus ST, you’ll be disappointed. Korea’s performance offensive arrives in the near future sporting a fancy “N” badge; for now, the medium-hot Forte SX Turbo and Veloster Turbo are the closest hot-hatch competitors. Instead, Kia situates this new powertrain as the “premium” option, aimed at those that wish for additional passing power and extra gumption for highway merging but remain highly unlikely to willingly venture toward anything remotely resembling a track-day.

Underneath the gently massaged exterior beats the 1.6-liter turbocharged I-4 offered in the Kia Optima and Hyundai Sonata/Tucson. 201 hp and 195 lb-ft of torque is a sizeable jump from the next most powerful Soul engine, up 41 hp and 45 lb-ft more than the naturally aspirated 2.0-liter. Despite the hop in power, there’s also a slight boost in efficiency to an EPA-rated 26/31 mpg city/highway.

Despite rumors surrounding an all-wheel drive variant, power is routed to the front-wheels through a seven-speed dual-clutch transmission. Sorry, purists, no do-it-yourself option here — the take-rate for a manual would have been so low, we don’t blame Kia one bit for the omission. Regardless, the dual-clutch is a perfect compromise, returning speedy shifts without the chalky, hesitant personality some twin-clutch gearboxes are cursed with. 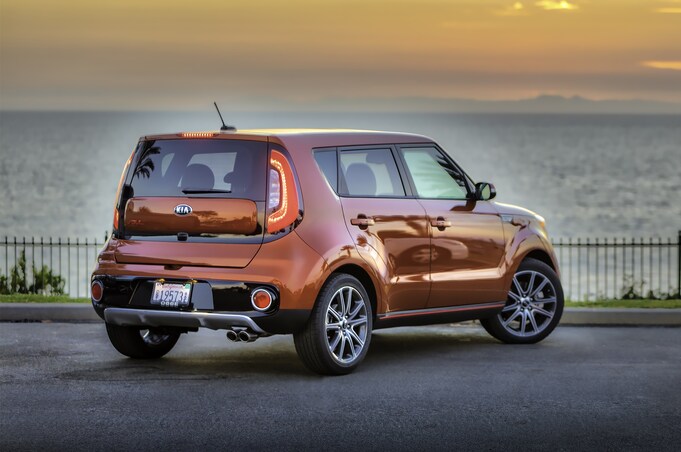 For when you absolutely, positively have to eke every ounce of performance out of the Soul Turbo, Kia developed a Sport mode specifically for this powertrain. In Sport, everything is predictably sharper, including higher shift-points for the transmission, heavier steering, and eager throttle-mapping.

Aside from some slight tuning changes made to the damping and springs, the Soul Turbo’s chassis remains more-or-less the same as the regular Soul. To compensate for the boost in power, the Turbo gains marginally bigger 12.0-inch brake rotors in the front, while the rear rotors remain 10.3 inches in diameter.

Out on curvaceous Nor-Cal roads, the Turbo was surprisingly poised. It’s not nearly as fun as a purpose-built hot-hatch or even the sunny Mazda CX-3, but the Kia is entertaining enough to satiate the occasional backroad craving. Due to the electrically assisted steering rack, feedback is unfortunately kept to a bare minimum. Torque steer is noticeably absent as well, however, a welcome change from the more-aggressive Forte SX Turbo we drove earlier this year. Despite our best attempts, the standard all-season tires remained silent and free of any vocal dissent.

Separating the Turbo from the rest of the Soul lineup is some additional glitz both inside and out. A new, paddle-less flat-bottomed steering wheel is a welcome addition, along with catchy contrasting stitching on the seats and wheel. As many other drivers noted, the Turbo’s 18-inch wheels are strikingly attractive, appearing not too far removed from the wheelset of the fantastic 2012 Track’ster concept. 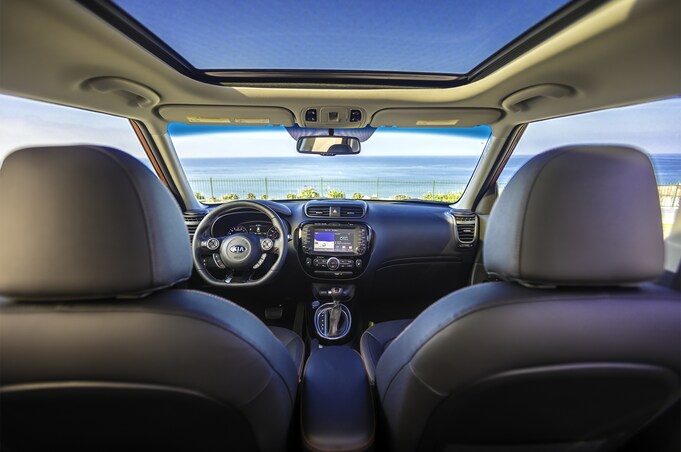 More importantly, the Soul remains one of the most usable and spacious offerings in the segment, with an impressive 61 cubic feet of stowage with the seats folded down, besting the cramped Mazda and the cavernous HR-V. Backseat passengers have plenty of leg and headroom, while the front-seat occupants enjoy an exceptionally high roof.

You can only get the 1.6-liter powerplant in the Exclaim trim, meaning each Turbo arrives with a bucketful of interior features. Even when loaded to the gills, the Soul Turbo is affordable; ours was kitted out with Apple Car Play/Android Auto, panoramic sunroof, Harmon/Kardon audio system, and navigation, and still came in a tick above $27,000.

We like the regular Soul, but love the new Soul Turbo. It’s a usable and non-compromising power upgrade over the naturally aspirated models that returning better fuel economy and offers improved backroad manners. As far as we’re concerned, the fact that it remains under $30,000 is just icing on the square-shaped cake.