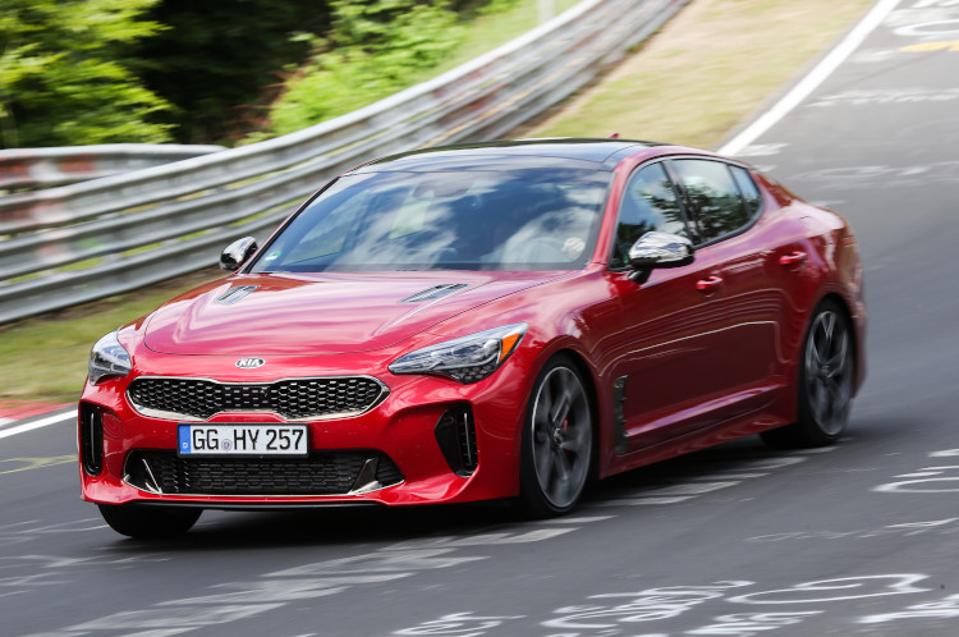 The 2018 Kia Stinger at speed on the Nurburgring.

I can’t believe that I am doing 153 mph down the long straight at Nürburgring’s Nordschleife in a Kia. Years of experience reviewing cars had cemented my opinion of the Korean automaker ― typically front-wheel drive, economy minded, and value oriented — but all of that is in the process of being shattered by its all-new Stinger. I’m lapping the planet’s most challenging race track, a meandering 12.3-mile “Green Hell,” in a twin-turbocharged Stinger GT that has completely changed the way I look at the brand.

To refresh your memory, the Kia Stinger is a turbocharged rear- or all-wheel drive five-door engineered to compete directly against the Audi A5 Sportback and BMW 4 Series Grand Coupe. Based on the Kia GT concept that was revealed at the Frankfurt Motor Show in 2011 — a prototype so well received that management gave a green light for production — the production version is designed to be as sporty as it is stylish and luxurious.

“The new Kia Stinger is a true gran turismo, a car for spirited long-distance driving,” explains Gregory Guillaume, Kia Motors Europe’s Chief Designer who sculpted the vehicle at the company’s design center in Frankfurt, Germany. “It’s not about outright power, hard-edged dynamics and brutal styling all at the expense of luxury, comfort and grace. The Stinger has nothing to do with being the first to arrive at the destination – this car is all about the journey. It’s about passion.” 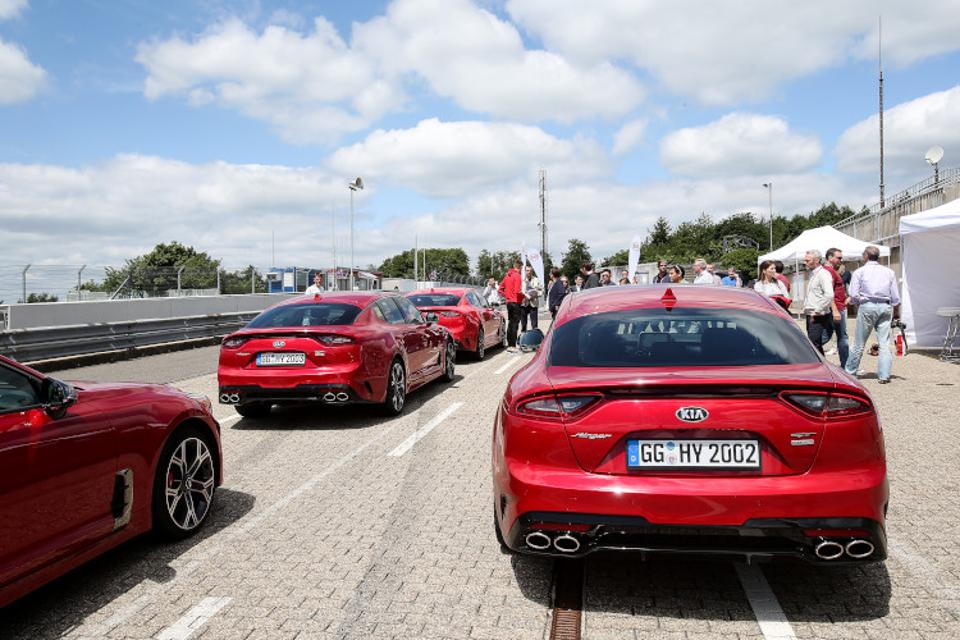 A handful of Stingers, fueled and ready to lap the famous German track.

Few questioned Kia’s ability to execute on its lofty promise, especially after it hired Albert Biermann away from BMW in late 2014. The highly respected Vice President of Engineering at BMW M Automobiles — the M3 and M5 are on his resume — is now tasked with running vehicle test and high-performance development at Hyundai Motor Group. When Biermann was first shown the near-finished clay models of the future Kia Stinger, he turned to Guillaume and remarked with a smile, “Now, I need to make it drive as good as it looks.”

That wouldn’t be easy, as Kia’s ordinary front-wheel drive architecture is wonderful for interior packaging, low manufacturing cost, and fuel efficiency, but that goodness comes at the expense of driving dynamics. Following the lead of BMW and Mercedes-Benz, two automakers that choose a more balanced rear-wheel drive configuration, Kia borrowed a platform from its premium Genesis sibling (like those automakers, Kia will also offer an all-wheel drive powertrain). The new architecture, which is engineered for a sporty and premium ride, boasts a suspension that uses MacPherson struts in the nose and a five-link design in the tail — it is complemented by Kia’s Dynamic Stability Damping Control (DSDC), for a driver adjustable ride.

Power is also a necessity, so Kia drops one of two engines under the Stinger’s hood. Standard models (offered as the ‘Stinger’) are fitted with a turbocharged 2.0-liter, four-cylinder, rated at 252 horsepower and 260 pound-feet of torque. The upgraded model (badged ‘Stinger GT’) arrives with a twin-turbocharged, 3.3-liter, six-cylinder engine rated at 365 horsepower and 376 pound-feet of torque. An eight-speed automatic transmission, with steering wheel-mounted paddle shifters, is standard equipment. 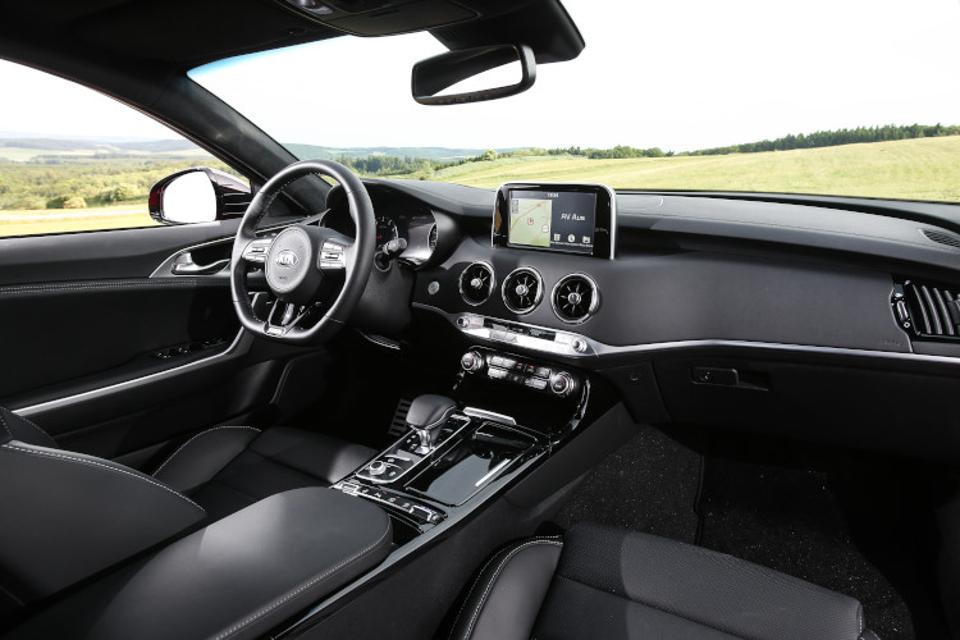 A luxurious cockpit designed with the driver in mind.

Full disclosure: I’ve already driven the Kia Stinger GT twice. I had a Kia Stinger First Drive in Korea last December, and a Kia Stinger Second Drive in the Arctic Circle in February — both opportunities revealed countless details about the vehicle (read both stories for in-depth technical details), but none could come close to the hands-on experience of driving the Stinger GT on the challenging north loop of Nürburgring.

Kia brought a half-dozen Stinger GT models to Germany, each painted in blazing metallic red (technically, one was a vinyl wrap) — three rear-wheel drive and the balance all-wheel drive. Other than two minor tweaks (the vehicles are wearing Euro-spec brake pads and suspension components because Americans prefer things quieter and softer — they are identical to the vehicles arriving in local showrooms later this year. With keys in hand, I was instructed to climb behind the wheel and chase a professional driver (also in a Stinger GT) around the long circuit. Sounds easy, except the Nürburgring is everything but.