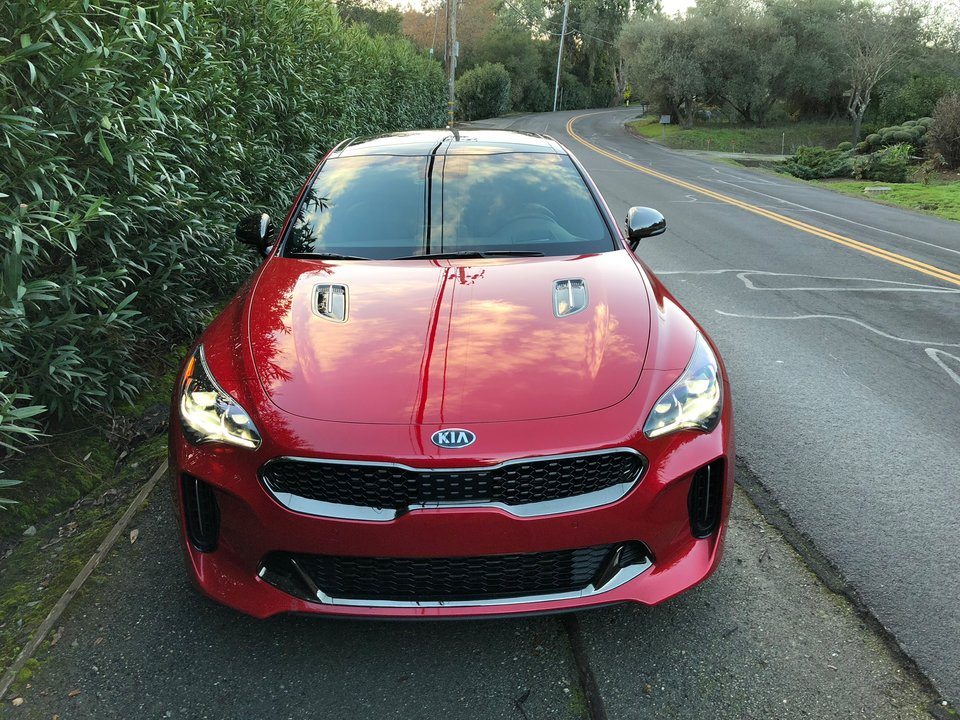 Kia has scored a notable victory with the Kia Stinger, a high-performance sedan from a brand better known for affordable four-doors and SUVs.

The Stinger was the toast of the auto-show circuit in 2017. I first sampled the all-wheel-drive GT2 version of the car in California in early 2018. This $52,000 machine, with a 3.3-liter twin-turbo V6 making a tasty 365 horsepower and 376 pound-feet of yummy torque, completely captivated me as I drove around the Bay Area.

Later, I enjoyed the same car in the New York/New Jersey area and was equally impressed. So was my colleague, Ben Zhang, who took his first crack at the Stinger.

We haven’t yet tested the base four-cylinder trim, priced at $32,000. But I just finished enjoying the rear-wheel-drive GT2, which clocked in at about $50,000. Full review coming later, but suffice it say that as much as I was ga-ga over the AWD Stinger, first-impressions aren’t everything; the more classically configured RWD GT2 is THE ONE. I just wanted to drive it, and drive it, and then drive it some more, and then have dreams about driving it.

I’m not usually this thorough taken by a car, but the Stinger combines style, value, performance, and versatility is such a brilliant way that all bets are off. Particularly when you consider that you can get the marvelous V6 in basic GT package for an astounding $38,350.

Consequently, I’ve been doing all manner of running comparisons in my head. For my money, while the Stinger is overtly taking on the entire luxury performance-sedan segment — Audi, Lexus, Mercedes, and BMW — the aim is squarely at BMW. Bimmers provide the reference driving dynamics that the Stinger is seeking to emulate.

As it happens, I’ve driven a bunch of Bimmers. Here’s how the Stinger stacks up against as many as I can think of.

First, let me just refresh your impressions of the Stinger, in GT2 AWD trim. 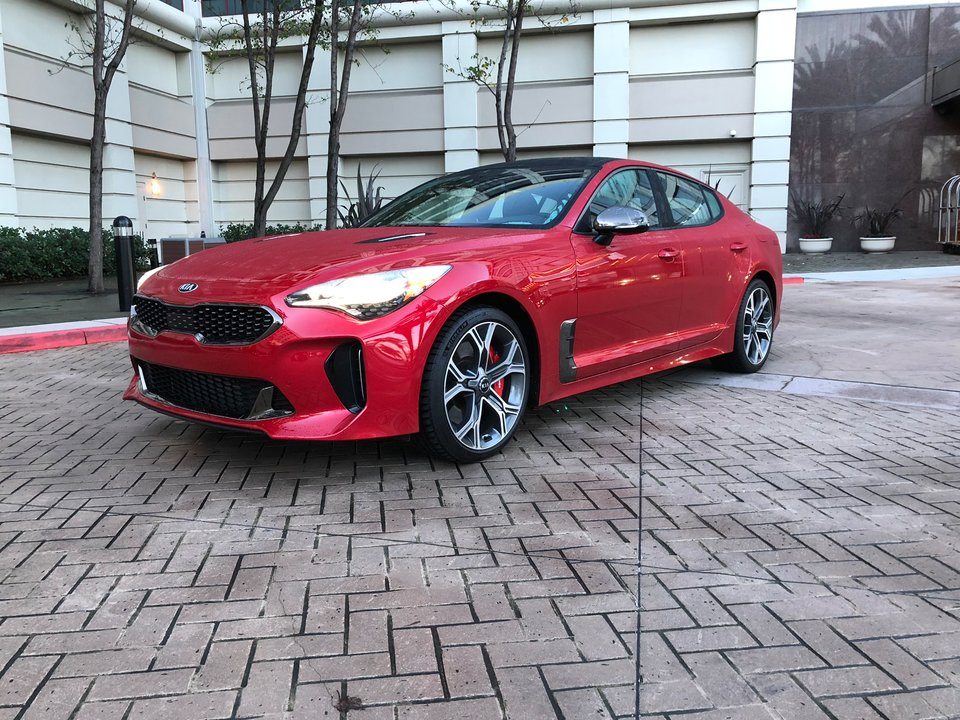 “It’s an endlessly fun car, a literal joy to drive,” I wrote in my review.

“It fires up with a pleasing snarl (OK, an augmented one, but still) and growls cheerfully when pushed. It’s flat-out fast. The 0-60 time is supposed to be 4.7 seconds, but I thought it was notably quicker than that. And you have to watch yourself at cruising velocities, as the Stinger taps out the legal speed limit in a hurry, but do so with such poise and relative quiet that one can easily overlook the speedometer.”

The rear-wheel-drive car is cheaper and more fun. Stomping in the throttle and feeling that back end dig in is motoring bliss. Obviously, the RWD setup means that you’ll have an easier time testing the limits in the grip on those back tires, if that’s your thing.

How about the BMW M3? 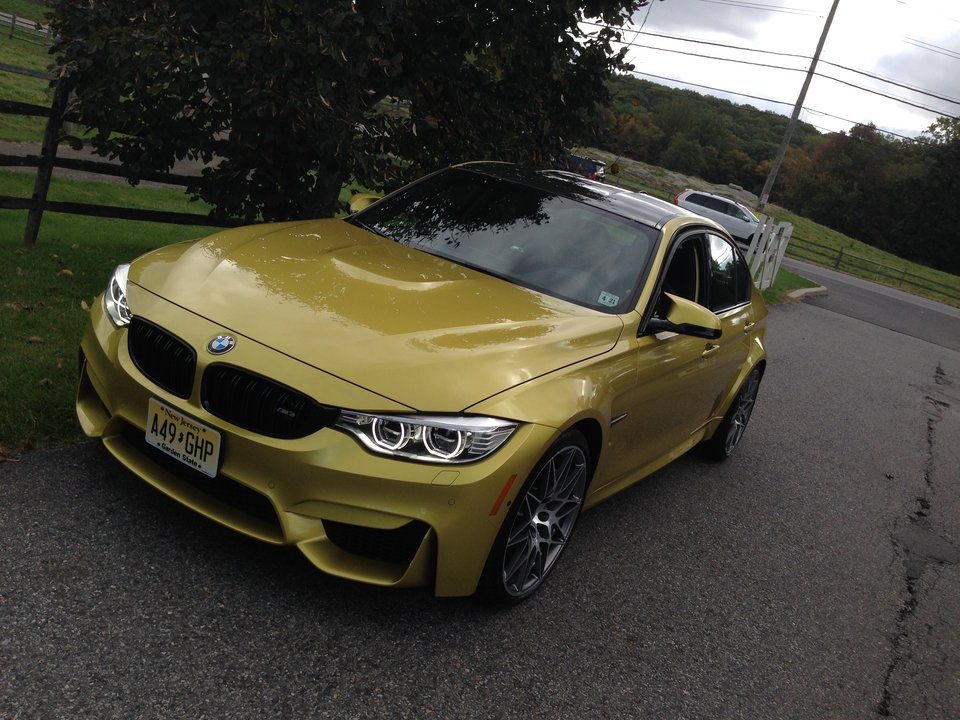 The BMW M3 also has a six-banger under the hood, plus a pair of turbos. But this motor yields 425 horsepower to the Stinger’s 365 hp.

The M3 is also a more aggressive looking car.

And what of the M4 convertible? 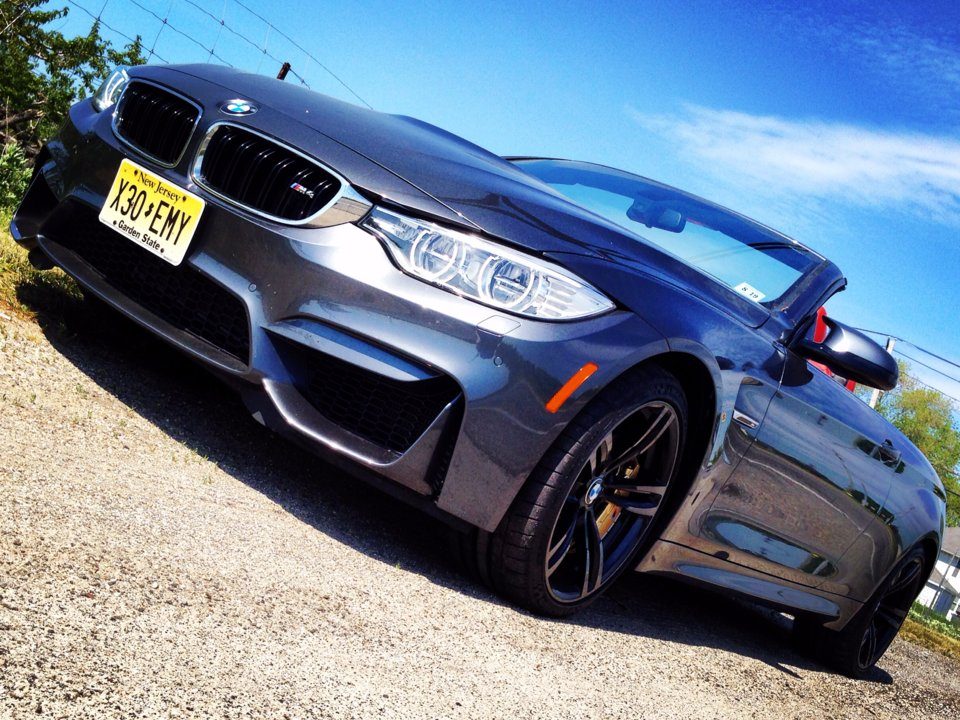 I checked out the convertible version, which offers two doors rather than the M3’s four but packs the same power under the hood: 425 horses.

Additionally, the M4 drives like a German muscle car. The Stinger is sportier.

And what say you of the M2? 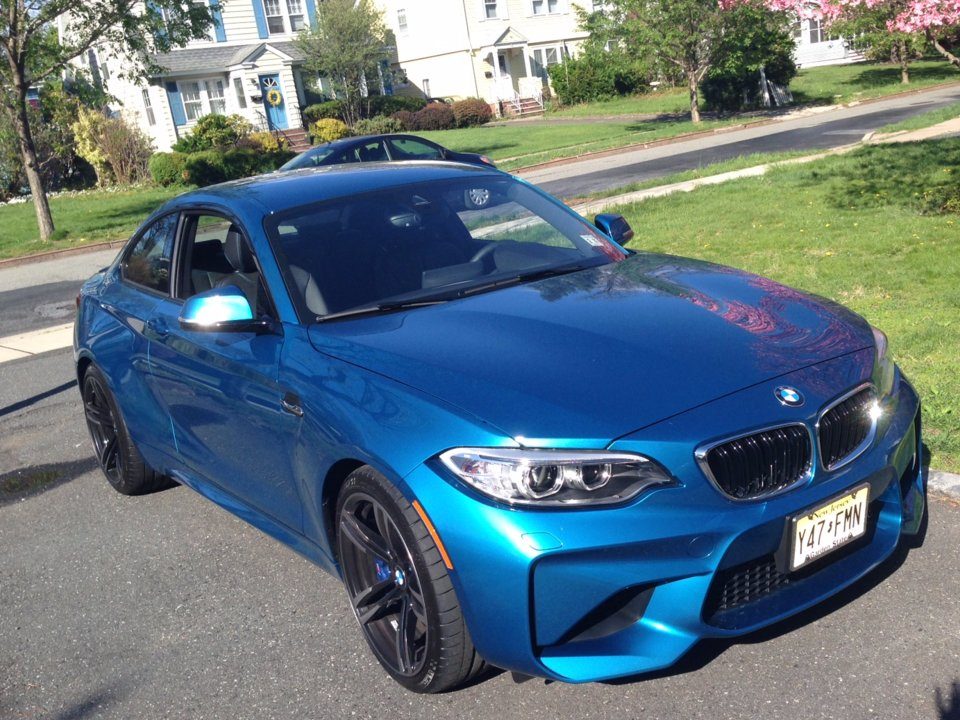 The mighty little Bimmer coupé is close with the Stinger on the specs, boasting a 365-horsepower, 3.0-liter, twin-turbo’s inline six-cylinder engine.

What you’re getting here is one of the most fun BMWs to drive. But the package is smaller than the Stinger’s. Otherwise, serious competition.

How about the tweener M-car — the M240i convertible? 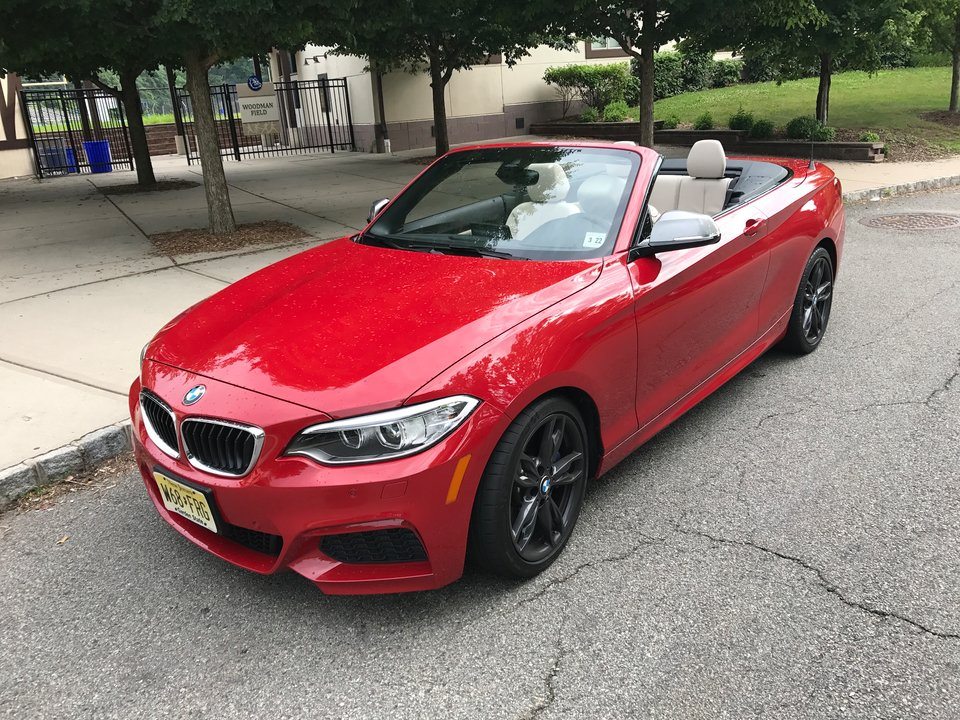 I’ve actually sampled both the coupé and convertible versions. What we have here is a 335-horsepower turbo six and a price tag of about $36,000.

For my money, this is the best BMW on the market, if you like to drive. However, the Stinger is more versatile, and the Kia’s V6 is more potent.

Moving away from the M-cars, how does the Stinger stack up against the 5-Series?

When we tested the 530i, we were perfectly OK with the 248-horsepower turbo four-cylinder engine. That 5-Series was crammed with tech and luxury and was priced at over $70,000, or $20,000 more than the base car.

The Stinger and the 5-Series aren’t really in the same segment, although I think the Stinger kind of sits between the 3-Series and the 5-Series thanks to a nice big trunk under the fastback hatch and a decent amount of rear legroom.

Obviously, you get a lot more motor for your money with the Stinger, even if you upgrade the BMW to a 335-horsepower 540i. Relatively speaking, you get less luxury. But the driving dynamics of the Stinger GT2’s are considerably more appealing.

And finally, how does the all-gas Stinger do when matched against the plug-in hybrid 3-Series? 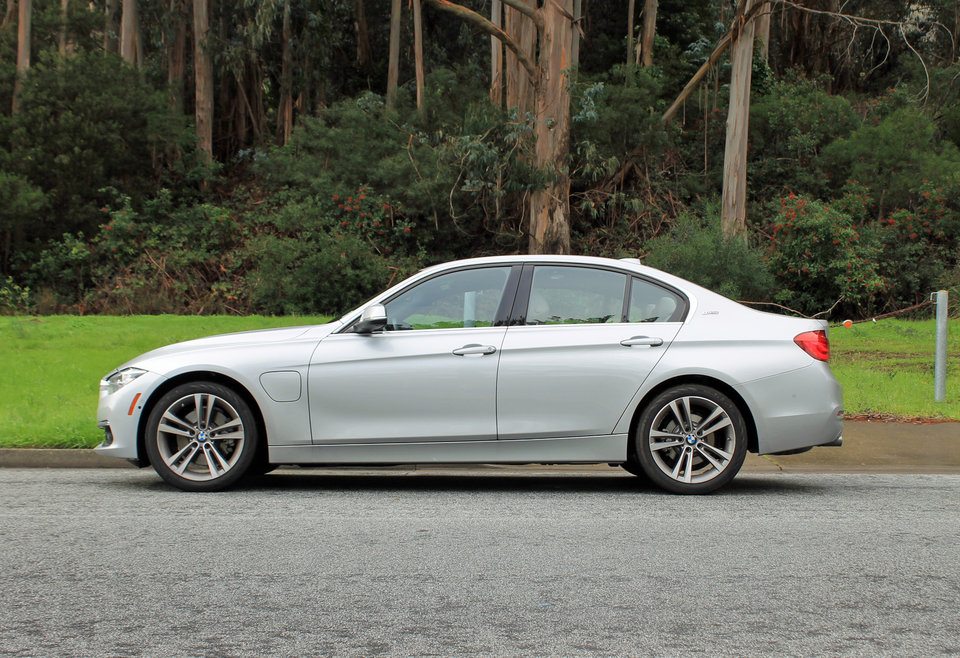 We’ve generally been quite pleased with the BMW 330e; I drove it on the East Coast and BI’s Bryan Logan sampled it on the west.

It’s more of a BMW for the environmentally conscious buyer, however. It’s a pleasure to drive, but it doesn’t thrill like the Stinger, which obviously can’t be plugged in. And it can be had for less than $50,000.

Minus the blast-to-drive aspects, a key difference between the Stinger and it BMW competition is that the Kia is much easier to deal with as far as instruments and entertainment go. BMW’s have this busy, cockpit-like vibe; and the infotainment system, iDrive, while much-improved over the years remains quite complicated.

The Kia, by contrast, has some of the most intuitive controls of any vehicle on the market, plus a touchscreen infotainment system that’s among the best in the industry.

So what’s the verdict? 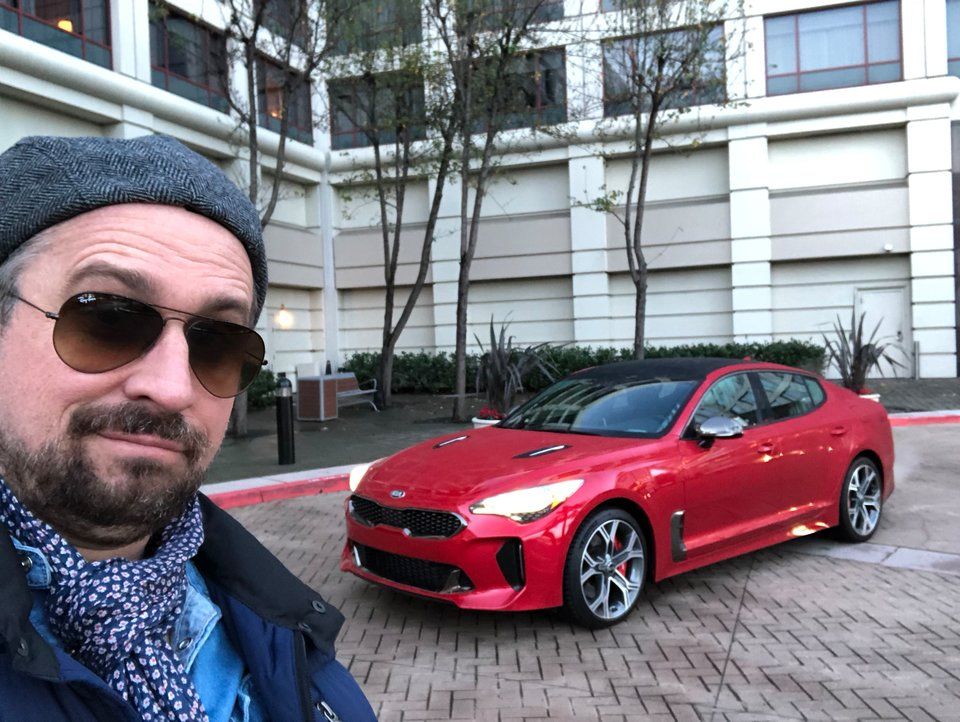 Stinger vs M3: Stinger wins on price, loses on power.

Stinger vs M4: See above.

Stinger vs. M2: Competitive! The M2 is a stunning Bimmer. But the Stinger has four doors.

Stinger vs. M240i: Stinger wins on power, but the M240i is a great value in BMWs. I’d take the Stinger, though.

Stinger vs. 5-Series: The 5-Series is a legend, but the Stinger is more fun to drive.

Stinger vs. 3-Series plug-in hybrid: Not a very good head-to-head because the Stinger is vastly more fun to drive. The Stinger’s instruments and infotainment are also better designed.

As the Stinger has made it way into automotive consciousness, it’s increasingly being thought of as occupying a unique niche: going up against the BMW 3-Series, but with a much friskier attitude and better pricing.

The closest thing to this idea is actually no longer with us: Pontiac, the General Motors brand that was killed after the financial crisis. In fact, late in Pontiac’s life, the brand sold a re-badged Australian Holden in the US, the G8 GT, that had a 361-horsepower V8 under the hood and matched up nicely against the Stinger.

Here’s the thing, though. If you want exhilarating performance at a compelling price, with a premium if not luxurious interior and excellent versatility, the segment-of-one Stinger is an excellent BMW alternative.

Do I think BMW will lose sales to Kia? Maybe a few on the margins. Bimmer doesn’t have much to worry about. But there’s no question that the smart money is going to take a closer look at the Stinger.