On Alberta’s Icefields Parkway, the Kia Telluride stands out from bevy of big SUVs

The last time I drove through the Rockies with my mom, it was 1984, and we were sardined into my grandpa’s Buick Century with my grandparents, my dad and my six-year-old brother.

We drove from Edmonton to Vancouver in July. Without air conditioning. There was squabbling.

“That was terrible – this is definitely a much better trip than that one,” said my mom, Rose, as we drove a 2020 Kia Telluride along the Ice Fields Parkway from Jasper to Lake Louise. “You guys would probably still have fought in this, but the rest of us would have been more comfortable.”

To test the three-row SUV, Kia asked journalists to bring along a family member – the Telluride’s tag line is “built for the modern family“ – for a 750-km-plus drive from Edmonton to Jasper, along the parkway to Lake Louise and then to Calgary.

Since that scarring eighties trip, minivans surged in popularity for a while (my mom went on to a series of them until switching from a Honda Odyssey to an easier-to-handle RAV4) but now we’re seeing the rise of the big three-row SUV. Companies that weren’t typically known for family haulers, such as BMW, Subaru and Volkswagen, have all been going bigger and bigger.

“A lot of people buy a large vehicle like this for the premium aspect – as a status symbol – but the Telluride is more specifically targeted to families,” said Marc Keller, the Telluride’s product planner. 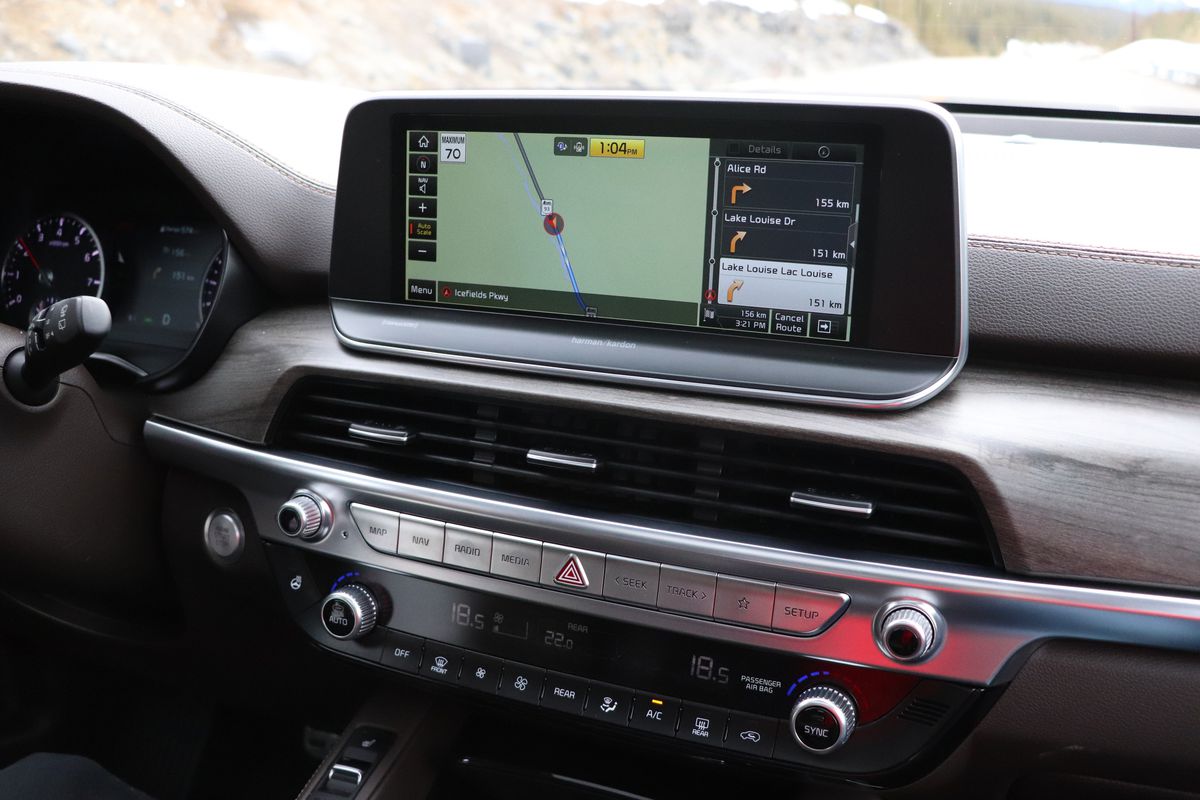 The Telluride is equipped with knobs for climate control and navigation and a standard 10.25-inch touchscreen.

So, Kia’s marketing focuses on space – 20 centimetres longer than Kia’s Sorrento, the Telluride seats eight (seven with the second-row captain’s seats in the top SX Limited trim), can fit three child seats and has more cargo space (601 litres) with the third-row seats up than its main competitors (the Honda Pilot, Nissan Pathfinder, Toyota Highlander and Ford Explorer). It also focuses on anti-squabbling tech features such as seven USB ports, ceiling-mounted rear-seat climate controls to keep kids from reaching the buttons and a one-way intercom to the third seat (“Mom and dad can stay focused on the road while screaming to the kids not to touch each other,” Keller said).

“The role of the Telluride in the lineup is to be ‘not a minivan,’” said Robert Karwel, senior manager of the Power Information Network at J.D. Power Canada. “It allows Kia to keep people in the fold instead of having them cross-shop another brand because they believe other vehicles offer more size, space and flexibility.”

Kia initially hoped to sell 2,000 Tellurides in the first year, but in the first three weeks, they’ve already sold 438.

Unlike that crowded eighties trip, this time it was mostly only the two of us – we drove with another journalist from Edmonton to Jasper. We briefly considered finding four more people to replicate the experience. But even just with two, the Telluride didn’t feel like too much vehicle, unlike some bigger SUVs.

“I’m surprised. I was worried about driving this, but it doesn’t feel big like my van did,” said my mom, 72, who took a quick turn at the wheel. “We could have used something like this years ago. But, for that trip, we probably should have just flown.” 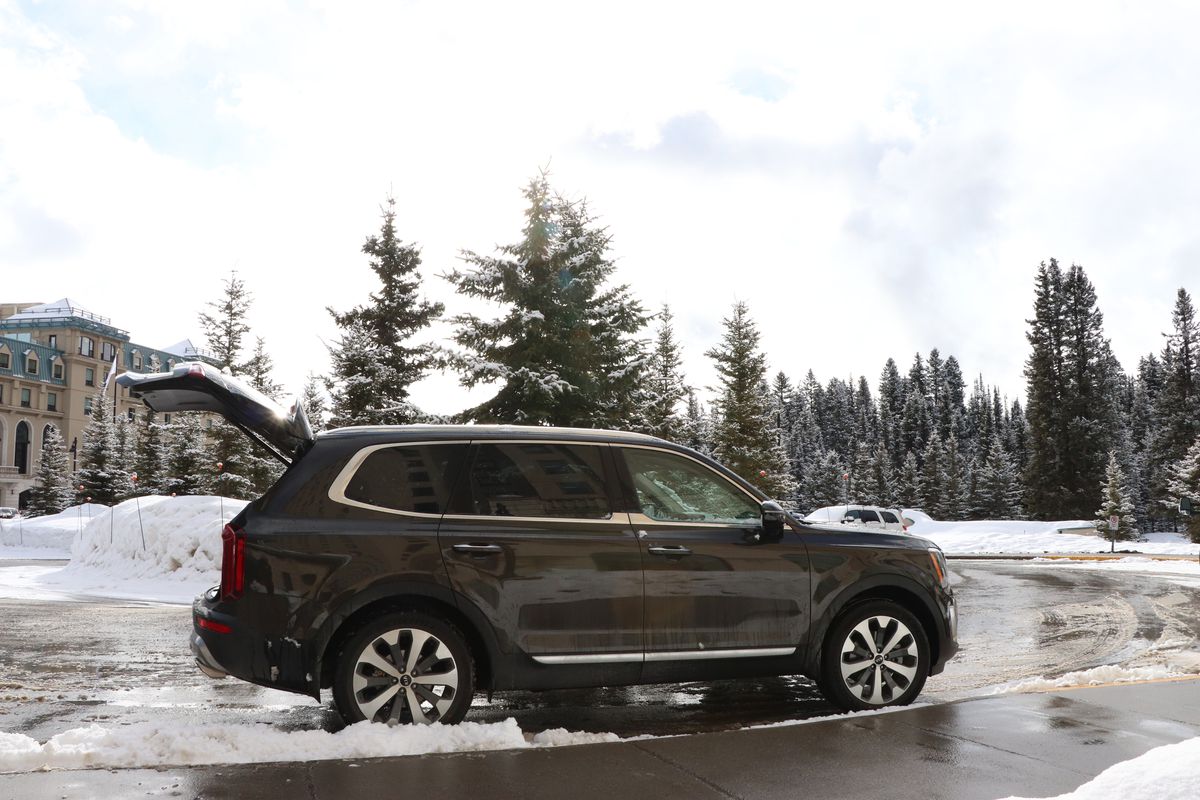 The 2020 Kia Telluride might not turn heads, but some features make it stand out from a large pack of big SUVs.

It’s boxy and rugged – more truck-like, especially from the front and back, than other Kias – but it’s still classy. It might not turn heads, but subtle details, such as the chrome that creeps up the side of the B-pillar and the orange daytime running lights, helped it stand out a little from the bevy of big SUVs on Alberta roads.

On winding mountain roads, the Telluride was perfectly fine – and that’s a compliment. It drives more like a car than some big SUVs. Handling was sharp for a three-row vehicle. The 291-horsepower V-6 – there are no plans to add the Stinger’s twin-turbo V-6, although Kia said anything is possible – didn’t wow with breakneck acceleration, but it delivered plenty of power for passing. The ride was comfortable, but not too cushy. It tows 5,000 pounds. Thanks to the Atkinson-cycle engine, highway fuel economy is slightly better than Kia’s smaller Sorrento, but it’s still similar to its main rivals. Mazda’s less roomy CX-9 is more fun to drive.

It’s tough to find much to complain about inside. It’s not dripping with luxury and doesn’t wow with style, but it still feels like a pricier vehicle. Controls are simple and intuitive. There are knobs for climate control and navigation and a standard 10.25-inch touchscreen. A minor gripe? The labels on a strip of controls for the infotainment system are tough to see, but you’ll probably just be using the touchscreen. The back doors open wide for easy access. There’s plenty of room in the second row, and the third row is comfortable for two real-sized adults. Access to the third row is easy with push buttons at both the top and bottom of the seat on each side.

The well-equipped base Telluride EX ($44,995) comes standard with navigation, CarPlay and Android Auto and the full gamut of safety tech. The $49,995 SX adds a monitor next to the speedometer that shows your blind spot when you signal to turn. Another feature locks the child locks if you’re trying to get out of the rear and a vehicle is coming. And there’s plenty of other tech to play with. That one-way intercom (some others, like Honda, offer something similar) sounds a little echoey in the third row. And, you have to turn it on from the touch screen, which could be distracting while driving. Another feature lets you mute just the second- and third-row rear speakers if the kids fall asleep. The top trim, the $53,995 SX premium, adds a heads-up display. 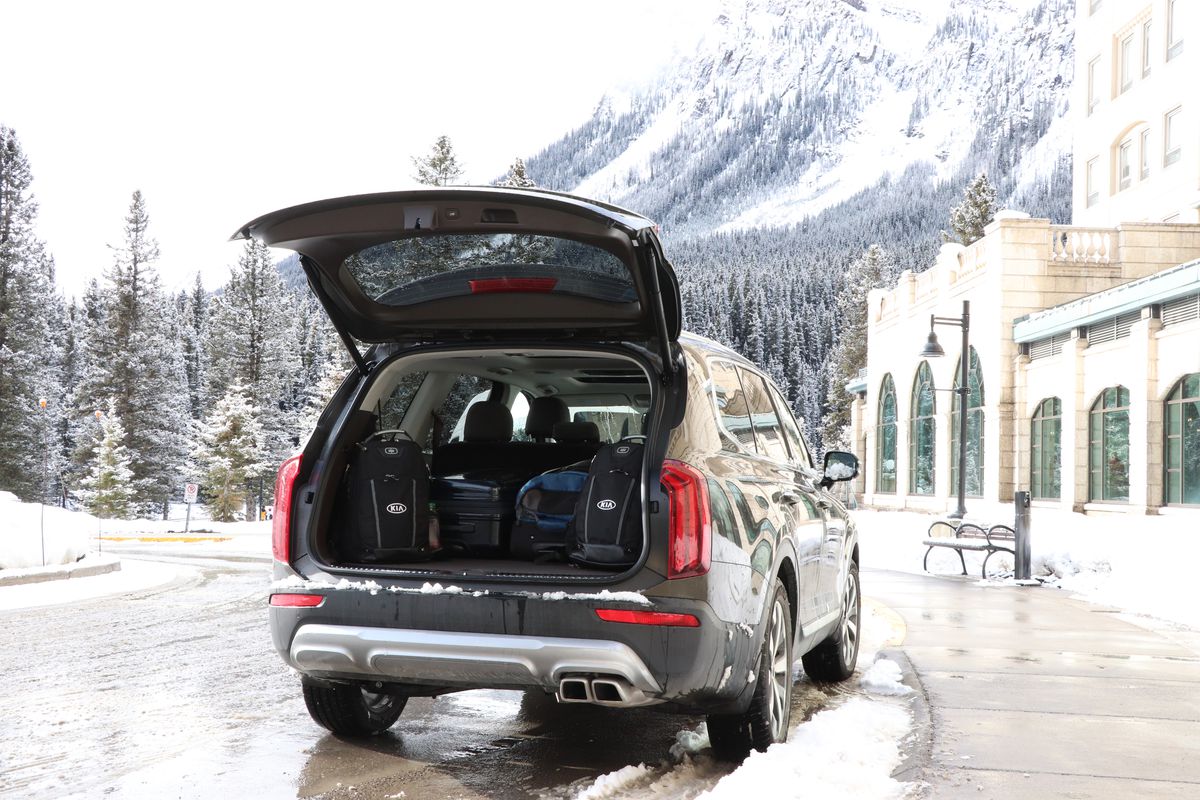 The Telluride has plenty of room in the second row, and the third row is comfortable for two adults.

With the third row up, we fit in three carry-on-sized bags. With seats down, it’s similar to key competitors. The seats fold down easily.

The Telluride has enough room, standard features and anti-squabbling tech to help minimize the chances of family feuds on most trips, whether they’re trips to Costco or to Colorado. Overall, you get plenty of bang for your buck – but there’s no turbo.

The writer was a guest of the automaker. Content was not subject to approval.