The Kia Telluride is the 2020 MotorTrend SUV of the Year

The Kia Telluride’s achievement as winner of MotorTrend’s 2020 SUV of the Year award is more inevitability than incongruity.

It’s been a long time coming for a company that was founded in 1944 and for decades has lived with the backhanded compliment of building “cheap and cheerful” transportation for buyers on a budget.

But this award is the deserved recognition that today’s Korean auto industry has evolved to possess the skill and talent to design, engineer, and manufacture world-class vehicles—ones able to best their mainstream Japanese, European, and American rivals in terms of style, dynamics, refinement, and build quality.

Manufactured in West Point, Georgia, the Telluride is a Kia built in America for Americans: a comfortable and roomy three-row SUV that’s perfectly pitched at the heart of a highly competitive segment that includes products from Chevy, Dodge, and Ford, as well as Honda, Toyota, Nissan, Mazda, and Volkswagen.

Read about Car, SUV, and Truck of the Year contenders and finalists HERE 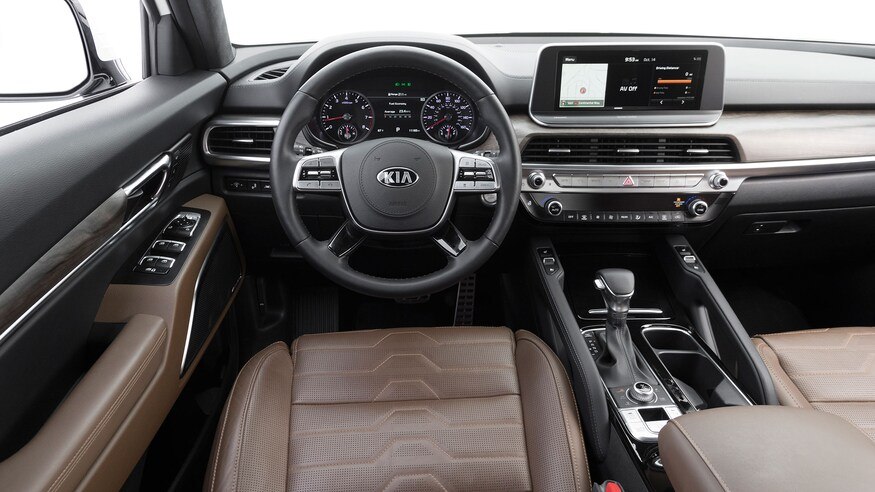 As expected of a Kia, the Telluride is a terrific value, offering lavish levels of standard equipment even in the $32,785 base model. And when you load it up to its as-tested $46,910 price, it absolutely deflates its mass-market competition.

But value is only one element of what makes the Telluride our 2020 Sport Utility of the Year. Our exhaustive judging process, in which each contender is evaluated in the context of our six key criteria, means the winning vehicle must be a well-rounded product, regardless of its functional focus.

So although its price makes the headlines, what helped the Kia Telluride garner seven first-place votes from our 11 judges is that it’s anything but bargain basement in the way it looks, the way it drives, and the way it effortlessly copes with the modern American family’s needs.

“One of the very few three-row crossovers that I actually like driving,” features editor Christian Seabaugh said after he pushed the Telluride around our SUVOTY proving ground’s challenging winding road. 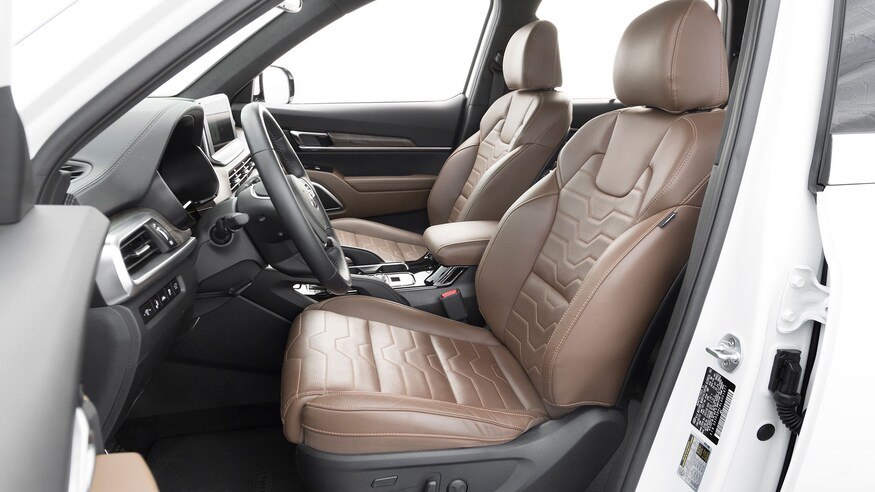 “The Koreans have become masters at studying what everyone else does right, picking the best practices, and implementing them,” Detroit editor Alisa Priddle added during the debate before the final vote.

Let’s take a closer look at how.

The Telluride is the largest SUV yet from Kia, measuring 2.8 inches longer overall than its Borrego predecessor, with a 0.2-inch-longer wheelbase. But it wears its size well thanks to exterior styling that is both confident and sophisticated. The large grille makes a statement without being overbearing, and the headlights have been pulled back from the corners to visually reduce the front overhang. “The imposing stance and good proportions impressively disguise the dash-to-axle ratio inherent to the front-wheel-drive architecture,” guest judge Johan de Nysschen said.

On the bodyside, simple surfaces mostly tell their own story instead of becoming a stage for entertainment riven with random cuts and lines. The greenhouse is subtly sporty, amplifying the slight rake to the D-pillar without compromising practicality. The rear graphic, bracketed by commalike taillights, is strong and distinctive. Even the base LX model gets jewelry such as the contrasting silver panels at the lower edges of the front and rear fascias and the brightwork around the greenhouse and at the base of the doors.

The Telluride looks substantial but is also friendly and approachable. There are some playful Easter eggs in the detailing, such as the castellation in the brightwork at the B-pillar, a nod to similar detailing in the Kia grille and on the upper edge of the windshield, and the indent at the lower front corner of the front doors.

The interior is just as confident and as sophisticated as the exterior. Again, even the base LX trim’s interior looks well equipped and well finished. As for the range-topping SX: “I keep looking around the cabin and reminding myself this SUV costs only 47 grand,” executive editor Mark Rechtin said after he climbed into our tester’s Dune Brown Nappa leather-trimmed interior. “It feels like a rustic-modernist house of a millionaire rancher.”

The interior not only looks good but is also practical and usable. Although the third row is for teenagers, adults will fit, and smartly located seat-fold buttons and grab handles to get in and out of the rear doors offer better functionality than the comparably sized Mercedes and BMW SUVs. Then there’s the detail stuff, like both the second and third rows getting their own USB ports to keep all the family’s devices happily charged and functioning.

“Kia shames many luxury automakers offering vehicles costing twice as much,” Seabaugh said. “Fit and finish are superb, materials are excellent, and the color mixture is wonderful.”

The Telluride shares its platform and mechanicals with the new Hyundai Palisade. There’s only one powertrain option—the 291-horsepower 3.8-liter V-6 with an eight-speed automatic—but buyers can choose to upgrade from the standard front-wheel-drive drivetrain to all-wheel drive on all four available trims. It’s a $2,000 option.

Although the V-6 engine could use a little more than its 262 lb-ft of torque in the 4,460-pound SX AWD model, the fully loaded Telluride is still quicker to 60 mph and over the quarter mile than an entry-level Mercedes-Benz GLE 350 4Matic, which costs $10,000 more without options. What’s more, the Telluride also comfortably punches above its price point in terms of ride, refinement, and low noise levels.

And while most behemoth SUVs must sacrifice steering and handling for comfort, “It drives so much smaller than it is,” Seabaugh said. “It feels like a good two-row crossover, with crisp turn-in and feel for the segment, excellent ride quality, and great body control.” Its suspension is just a tad bouncy, but gusting crosswinds hardly fazed the Telluride when driving at 100 mph on our high-speed oval.

But it was on the gnarly, grainy, chattery, chunky surfaces on our 28-mile test loop outside Tehachapi where the big Kia really impressed the judges. Editor-in-chief Ed Loh praised its “exceptional quietness and smoothness,” and de Nysschen noted that “suspension compliance and ride comfort are its strengths.” 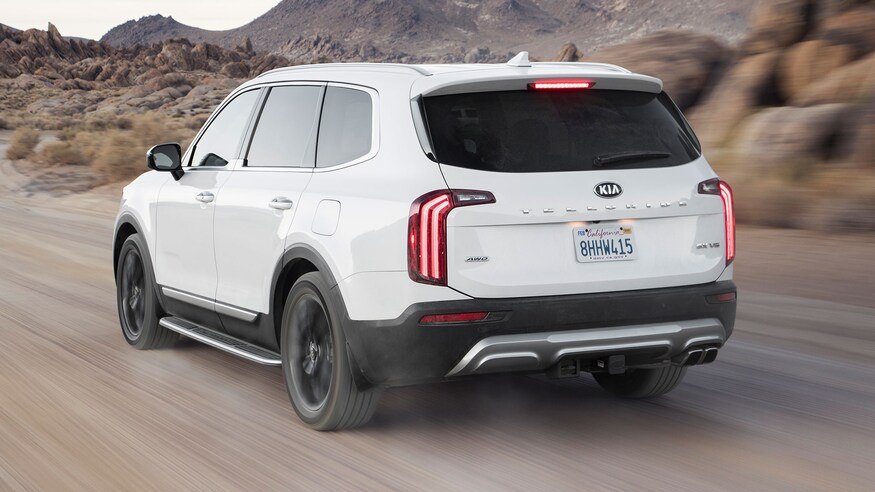 A rotary controller on the center console—which also allows drivers to switch between Eco, Comfort, Sport, and Smart modes, the latter of which lets the onboard computers figure out the best combination of efficiency and response—has a Snow mode, which adjusts throttle, transmission, and traction control settings to suit low-friction surfaces. A button in the center of the controller locks the center differential for ultimate traction in challenging conditions. Driven with due regard to its 8.0 inches of ground clearance, 17.0-degree approach and 20.9-degree departure angles, and 114.2-inch wheelbase, the Telluride will comfortably cope with bad roads and worse weather.

Even with a standard eight-speed automatic transmission, a large three-row SUV with a 3.8-liter V-6 engine under the hood will never be a paragon of fuel efficiency. The Telluride’s EPA fuel consumption numbers—20/26/23 mpg city/highway/combined for front-wheel-drive models and 19/24/21 mpg city/highway/combined for all-wheel-drive models—are right on average for the segment.

All Telluride models come with an impressive complement of passive and active safety features, with technology such as active cruise control, lane keeping assist, a forward collision alert system that also recognizes pedestrians, rear cross-traffic alert, and torque vectoring by brake standard even on the base LX.

The SX comes equipped with Kia’s camera-based blind-spot monitor, which shows a high-def, wide-angle image of the appropriate side of the vehicle on the digital instrument panel when the turn signal is activated. It’s a great feature for a quick extra check when changing lanes on the freeway and invaluable in crowded cities where cyclists can suddenly materialize alongside while you’re making a right-hand turn. 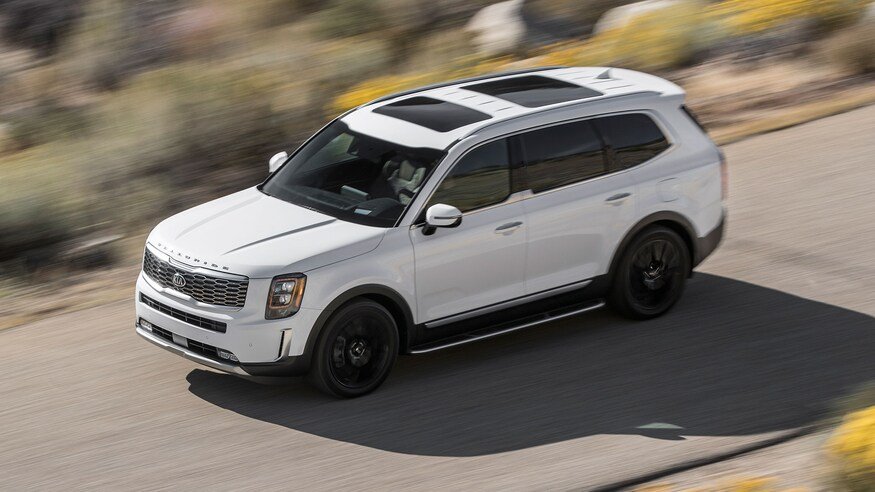 The base Telluride LX has an MSRP of $32,785. For that you get 18-inch alloy wheels and a ton of equipment—ranging from niceties like air conditioning and a leather-bound steering wheel to Kia’s 8.0-inch touchscreen with Apple CarPlay and Android-compatible UVO infotainment system interface and five USB charge ports. And, as mentioned, the price includes a full suite of active safety technologies and driver assistance aids. Plus, there’s room aboard for six sprawling passengers (it’ll fit eight, in a pinch), with a 60/40 split-folding second row and a reclining third row that provides ample room for three preteen children.

Senior production editor Zach Gale noted approvingly that even the base LX model came with the same powertrain and many of the features, such as the powered second row, as the range-topping SX: “What I really like about this SUV is how much of its experience isn’t tied to the loaded trim.”

The base Kia Telluride is a terrific value as a family vehicle. But so is upgrading to the $42,585 Telluride SX. Standard equipment includes 20-inch wheels, a thunderous Harman Kardon surround sound audio system, dual sunroofs, and a 12-way adjustable driver’s seat with memory.

Add just three key options—all-wheel drive ($2,000); the towing package ($795), which adds self-leveling rear suspension; and the SX Prestige package ($2,000), which includes a head-up display, heated and ventilated second-row seats, and the soft Nappa leather trim—and it’s an impressively smooth and quiet, lavishly equipped, and beautifully finished SUV that puts even ritzy rides like the standard-wheelbase Cadillac Escalade and Lincoln Navigator on notice. All for $47,380.

Or, as Loh put it: “A handsome SUV, loaded with the goodies families want (and want to show off), for a WTF price.”

Smartly styled, loaded with standard equipment, roomy and pleasant to drive, and, to cap it all, an astonishingly good value, the 2020 Kia Telluride is one of the most compelling family SUVs on the market today. Performance of intended function? Nailed it. 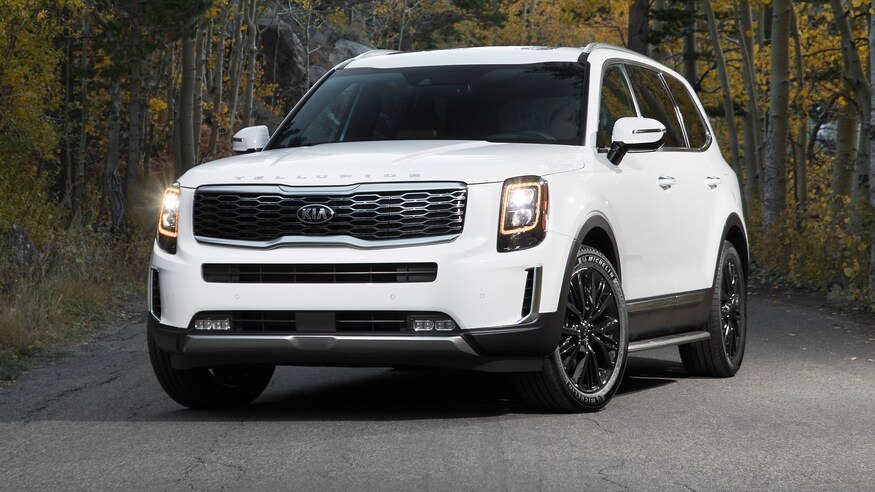 It just does everything right,” features editor Scott Evans said. “It’s quiet, comfortable, smooth, stylish, and affordable. What more could you ask for?”

That’s the real genius of our 2020 SUV of the Year. A great mass-market, mid-price family SUV like the Kia Telluride is a very, very hard product to execute. We’ll posit that it’s harder, in fact, than making a good luxury SUV—where the price premium afforded by the badge gives designers and engineers more spending headroom on equipment and tech that improve performance and refinement, along with perceived quality and luxury.

In an era when consumer behavior is influenced by an unremitting cycle of social media show and tell, buyers of affordable mainstream vehicles want to feel special. They want to feel they are getting a vehicle that has premium levels of style and quality, features and technology, and refinement and dynamic capability without paying a premium price. And with the Telluride, Kia’s designers and engineers have delivered an SUV that does exactly that.