The 2022 Kia Carnival is a minivan for SUV-lovers

Kia revealed the 2022 Kia Carnival today, its newest vehicle in the North American market and a significant entry into the stylistically stagnant minivan segment.

The South Korean automaker is throwing around a couple novel acronyms with the new-gen Carnival, both of which, no doubt intentionally, make it seem more SUV-like than minivan-ish.

They’re calling it an MPV (Multi-Purpose Vehicle) and the first LUV (Life Utility Vehicle), and though it may be those things, it also replaces the discontinued Sedona, which was a true minivan.

But take it in from the exterior and you can definitely see where Kia is coming from. The 2022 Carnival has a geometric grille, more prominent wheel arches, chrome moldings, and an overall more square profile that’s decidedly unlike the “typical rounded-out form” of its competition like the Toyota Sienna and Honda Odyssey. It’s also the first Kia to wear its new badge on the hood above the grille.

The North American Carnival is certainly more “utility” than its Korean cousin of the same nameplate, which has a more upscale vibe. That said, the Carnival available in Canada and the U.S. is no slob in its interior appointments and a serious upgrade from its predecessor.

Up front, there’s a panoramic dashboard, slim metal air vents and two colour options, including the Martian Brown leather shown in the photo gallery. But much like with the popular three-row SUV segment, its real significance lies behind the front seats. The Carnival’s segment-best cargo space is on display here with removable second-row seats in most trims, fold-flat third-row seats for best-in-class cargo space and a convenient new middle seat that slides forward to provide parents easier access to their littles.

In some models, the VIP Lounge Seating option fits the second-row captain’s chairs with legrests, ventilation and heating.

And how many USB ports is too many in 2021? According to Kia, that number is now in the double digits as the Carnival has up to nine ports with two inverters. Add that to its long list of tech including Apple CarPlay, quiet mode, passenger view, and safety features that minivan shoppers will appreciate like lane-keeping, smart cruise control and surround-view monitor. 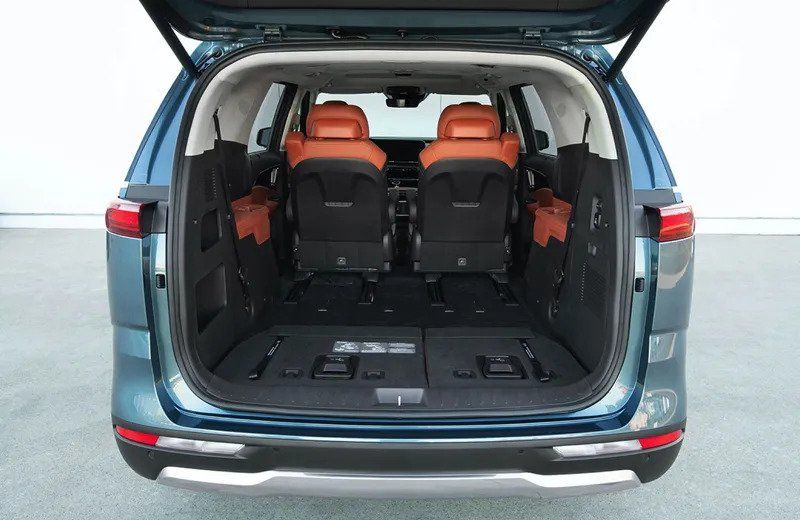 The least newsworthy things are the vehicle’s fundamentals. Riding on Kia’s new N3 platform, the Carnival is powered by a 3.5L V6 engine making 290 horsepower (up from 276 in the outgoing Sedona) and 262 lb-ft of torque, which it runs through an eight-speed automatic transmission to the front two tires only in all models. Even with aerodynamic tweaks to make it more fuel efficient, that lack of AWD may be noticed by Canadian buyers.