Kia has refurbished its all-wheel-drive Sorento for 2021, introducing a brace of 2.5L engines and technology once reserved for expensive German sedans. Since its debut in 2002, the Sorento has become progressively more powerful, and arguably more attractive. Its price has also climbed accordingly.

In an interesting twist of sibling rivalry, Sorento is no longer the big dog in Kia’s expansive crossover-SUV lineup.

That slot was usurped by the well-liked Telluride not long ago, leaving Sorento as what could have been described as the forgotten middle child.

For 2021, it is now wearing clothes which crib some style from its bigger brother, creating a sharp-looking machine that’ll stand out in a crowd. It would seem creating a design team lead by Peter Schreyer and Luc Donckerwolke – both of whom styled expensive vehicles during their time at the VW Group – is paying dividends.

This year, there are no fewer than a half-dozen trims of Sorento available to Canadian car shoppers. All of them are equipped with all-wheel-drive and an eight-speed automatic transmission. Every 2021 Sorento also gets driving aids like collision avoidance assist and lane following. As one moves up the ladder, of course, snazzier features appear. Let’s dive in. 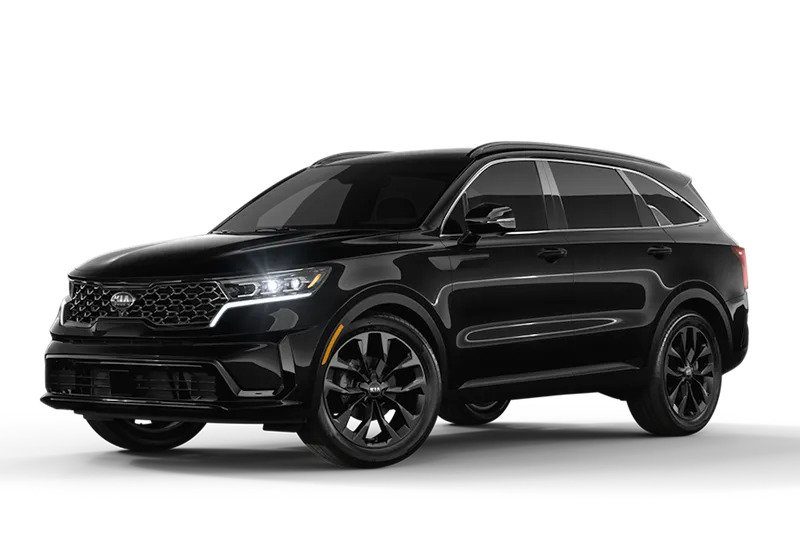 Serving as the value entry-level point to the model, the LX+ still comes styled with snazzy LED headlights, 17-inch alloy wheels, and satin chrome garnish. In other words, Schreyer und Donckerwolke refused to permit Sorento to show up with flat black bumpers and hubcaps. However, only three colours are available – all on the greyscale – continuing an infuriating trend in which automakers force customers to walk up the ladder in order to get their vehicle in, y’know, visible light. Rubbing salt in the wound, two of those three shades are extra-cost options.

Inside, this trim is well-equipped with features like Apple CarPlay and Android Auto baked right into its 8-inch infotainment system. Single-zone climate control may strain marital relations but the numerous power points will at least ensure all hands have a place to plug in. Cloth seats are heated up front (as are the sideview mirrors, by the way) and the steering wheel adjusts for reach and rake.

Under the hood is a naturally-aspirated 2.5L four-cylinder engine making 191 horsepower and 181 lb-ft of torque. If this sounds familiar, it’s because this mill pops up in other machines across the Kia-Hyundai empire. Lane keep and lane follow assists shepherd Sorento LX+ back into shape when the driver tries to colour outside the lines. 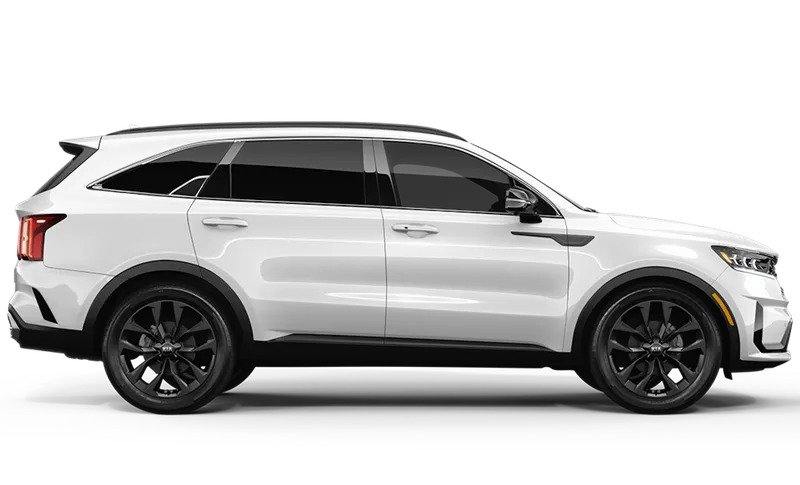 Making the walk to this trim level involves adding a few beans to the note but brings a host of features many families consider essential these days — including dual-zone automatic climate control. Also along for the ride are a very handy wireless phone charger, push button start to banish digging for keys, and a leather-wrapped heated steering wheel. The addition of blind-spot monitoring, backup sensors, and rear cross-traffic collision avoidance help ward off calamity compared to the entry-level model.

There are no mechanical differences between the LX Premium and cheaper LX+ trims, with both machines deploying the naturally-aspirated four banger mentioned earlier. Fuel consumption for both is rated at 10.1 L/100 km in the city and 9.2 L/100 km in highway settings. However, the LX Premium does get slightly bigger wheels in the form of 18-inch machined-finish alloys. Other measures such as head- and legroom are also unchanged. Towing capacity remains 2800lbs. 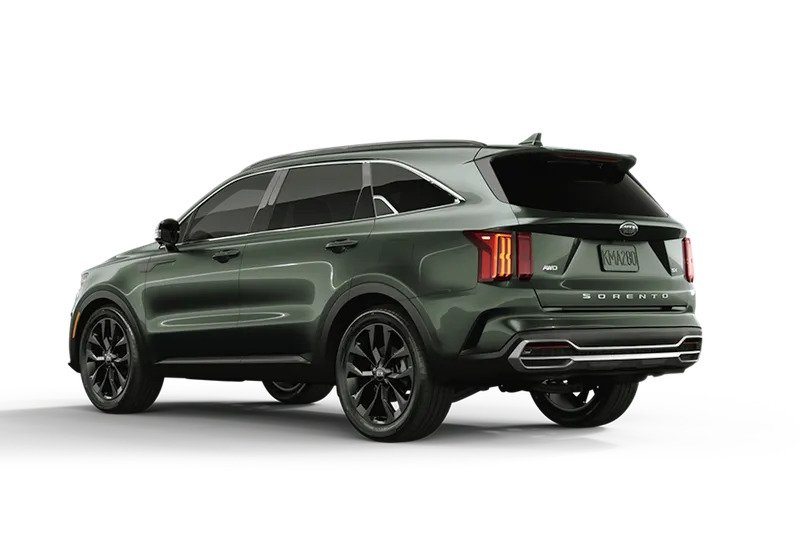 New for 2021 is the X-Line, representing Kia’s attempt to break into the popular ‘look like you’re headed to the off-road park’ school of design. Black door garnish and a silver painted grille are the first clues this thing is a bit more butch than lesser Sorento models, not to mention bride-type roof rails and a X-Line specific exterior design package.

Engineers endowed this trim with an increased ride height, giving X-Line a notable 8.2 inches of ground clearance compared to the 6.9 inches found on all other Sorento models. Overall height rises accordingly, so watch it in low-slung parking garages. This is the first of out sextet to earn the powerful turbocharged engine, a mill that produces 281 horsepower and 311lb.-ft of torque. While its transmission does have the same number of gears as the LX models, it is of a wet-type dual clutch design.

It is also the first trim to swap out the second-row bench seat for captain’s chairs as standard equipment. Other than that, its feature mix largely mimics that of the LX Convenience, so this $3,000 upcharge pays for the turbo engine and better ground clearance. It’s worth mentioning that the bigger engine can tow more: 3,500 lbs of conventional trailer can be attached to this car. 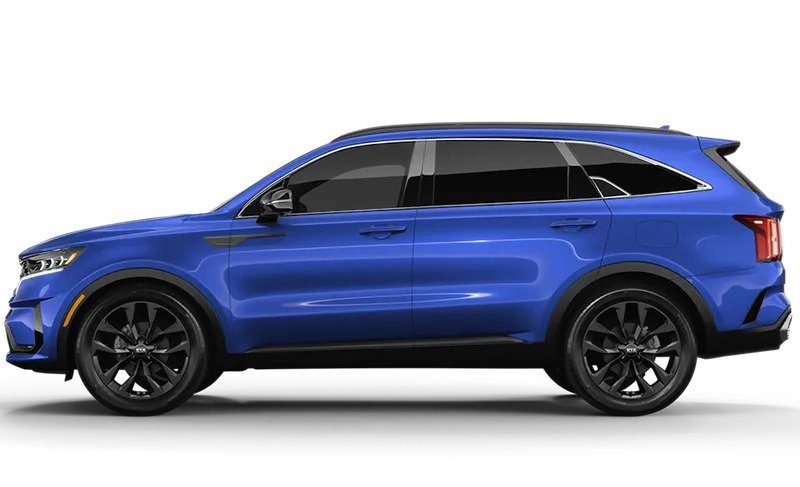 Sliding back to more traditional Kia trim levels, we find the EX which deletes the X-Line off-road(ish) body cues but retains markedly similar 20-inch wheels. Its front and rear bumpers earn a slightly more sculpted look while the grille and roof rails get doused in a pot of black paint.

The turbocharged engine described for the X-Line remains on duty, though that model’s extra ground clearance disappears. A power liftgate appears, as do synthetic leather seats and interior trim with a wood-style finish. Satellite radio finally makes the cut, a feature that should be included on every Sorento. There’s an auto-dimming rearview mirror, Kia’s UVO connected car services, and a Homelink system. 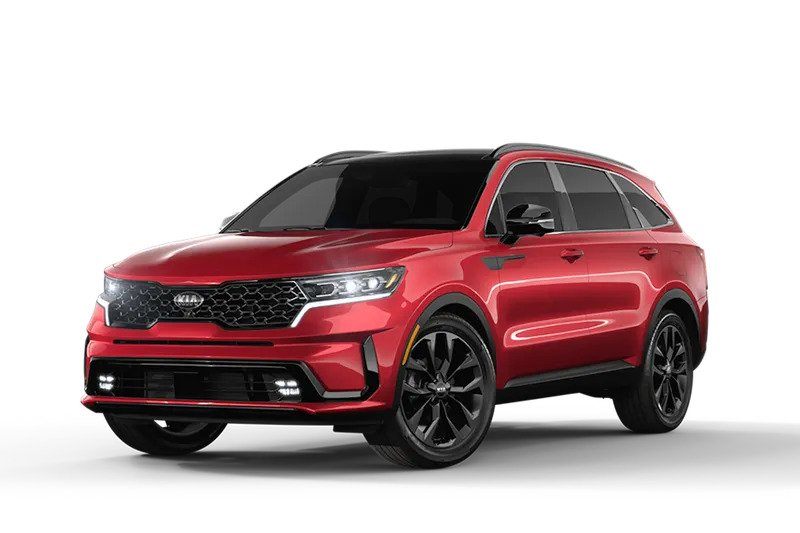 Moving up to EX+, the penultimate trim level for the 2021 Kia Sorento, we find a brace of LED fog lights on the car’s front fascia along with LEDs now peppering the rear combination lamps. A vast panoramic sunroof is included, plus automatic power-folding sideview mirrors. Kia also permits one of the best paint choices, Runway Red, which somehow looks best on this (and the next) trim. Perhaps it’s the fog lights.

Infotainment gets a massive upgrade here, with a 10.25-inch screen perched atop the dashboard ready to belt out your kid’s favourite tunes or grim news from the CBC. Navigation is part of this package. There is also a 110V power inverter (like a household outlet) and interior lighting is upgraded to LEDs. Rear-seat passengers can warm their buns on the heated seats Advanced smart cruise control and Kia’s highway drive assist stand ready to take some of the fatigue out of long road trips. 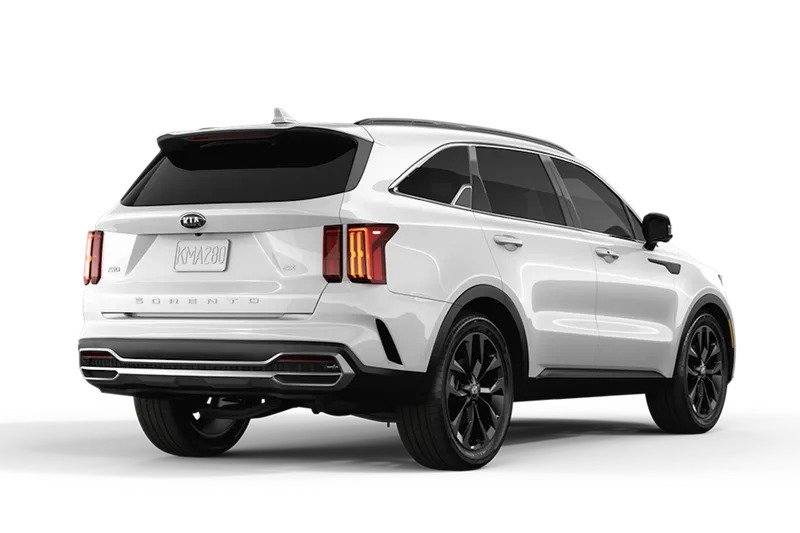 Finally, standing atop the heap is this SX trim. It is here one will find real leather adorning the seats (air-cooled in the front!) which now have extra lumbar adjustments for those in the front row. The second-row can now be folded via remote, and memory functions permit multiple drivers to quickly recall their favourite seating positions.

A better sound system is courtesy of Bose, though speaker count is capped at six. A very snazzy 12.3-inch digital instrument cluster, a first for any Kia Canada SUV, now faces the driver along with a heads-up display. An around-view monitor keeps tabs on the surroundings while a Safe Exit Assist system attempts to warn driver and passenger alike if they’re about to open a door into the path of a moving vehicle.