Germany’s Nürburgring is among the most challenging and dangerous race tracks in the world. If you don’t believe me, just search the internet for a crash compilation video. The historic circuit spans 13 miles, encompasses 73 corners, is relatively narrow, features a lot of elevation change and I have never previously been on it. For my first laps ever around the Nordschleife, I’m in a 2018 Kia Stinger GT.

Yes, a Kia, which not long ago would have been downright comical, but today is no laughing matter thanks to Albert Biermann. Before Biermann joined Kia at the end of 2014, he spent 32 years at BMW, where he last oversaw the development of the company’s M vehicles. At Kia, Biermann heads vehicle testing and high-performance development with the Stinger being among the first vehicles to fully benefit from his oversight.

Sliding behind the wheel of an all-wheel-drive Stinger GT in a staging area behind a Stinger “guide” vehicle piloted by a Kia durability driver, I was under the impression that our out lap would be relatively mellow. At least, that was my takeaway from the morning safety briefing where we were shown one of those Nürburgring crash compilation videos and told to drive within our limits. 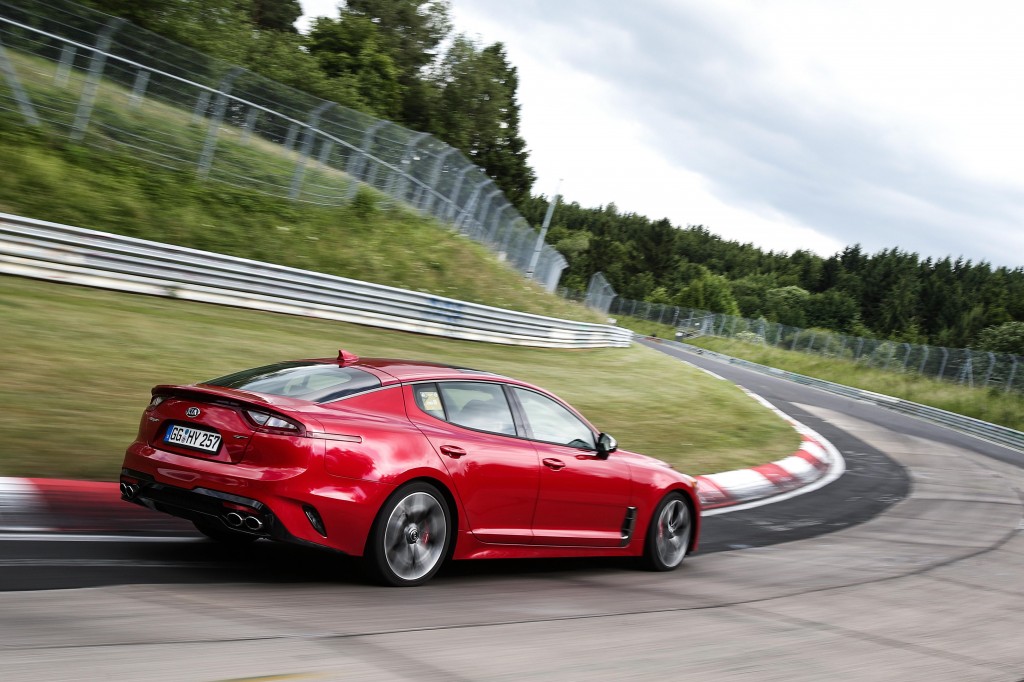 Capable on the world’s most demanding racetrack.
Kia
Apparently, the durability driver in the lead car wasn’t in the safety briefing and was in attack mode right out of the pits. Trying to keep up with a professional driver at a track you’ve never been to in a car you’ve had very little experience in is a Herculean challenge, but I think I did an admirable job, mostly because of the incredibly capable and balanced vehicle Biermann and his team has created.

In Sport mode with the adaptive suspension firmed up, the near-4,000-pound Stinger felt planted through gradual, high-speed bends and handled side-to-side weight transfers remarkably well with an acceptable amount of body roll for a grand touring-type car. Unlike the majority of race tracks in the world, the Nordschleife doesn’t feature glass-smooth pavement. Mid-corner bumps are everywhere, which the Stinger’s chassis gobbled up beautifully as I continued my pursuit of the guide car.

If there is a complaint about the all-wheel-drive Stinger, it’s the front-end push in tighter corners. It’s far from terrible, but it is there. Unless prospective owners plan to take their Stingers to open track events often, turn-in is more than enough for regular to spirited street driving. 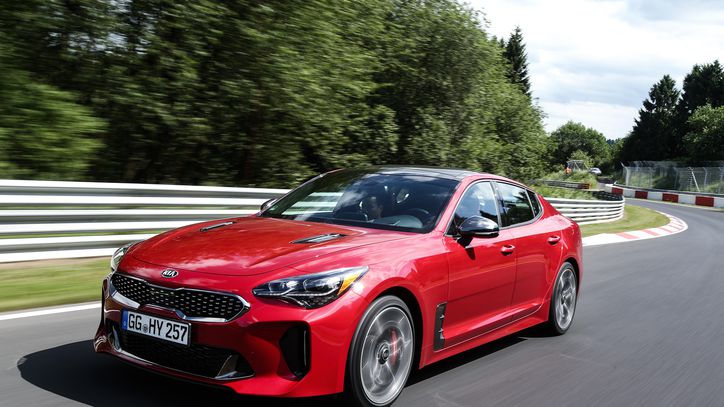 2018 Kia Stinger GT is a master of Germany’s Nürburgring

Things got really exciting when I swapped into a rear-wheel-drive car. It didn’t take long to notice that it’s the athlete of the Stinger range, with a lighter 3,800-pound curb weight and swifter handling reflexes. It was more eager at turn-in with the front end simply digging in and going in the direction you tell it to, while the rear rotates around with the help of a mechanical limited-slip differential.

Steering in Sport mode featured some play on center, which is a good thing for regular driving, but dial in more steering angle and it firms up and offers a decent amount of feedback. The Brembo brakes never faded throughout the torturous runs with very little cool-down time between sessions, nor did the 19-inch Michelin Pilot Sport 4 tires fall off, with grip levels remaining high and consistent lap after lap.

Powering the Stinger GT is a 3.3-liter, 365-horsepower turbocharged V6 boasting muscular grunt from the middle of the rev band up to redline, helping to produce a 60 mph time of 4.9 seconds. On track, boost lag was apparent when stepping back onto the throttle while exiting corners, which was a bit disappointing. It did receive extra credit for belting out a lovely growling exhaust note, which isn’t typical of blown V6s. 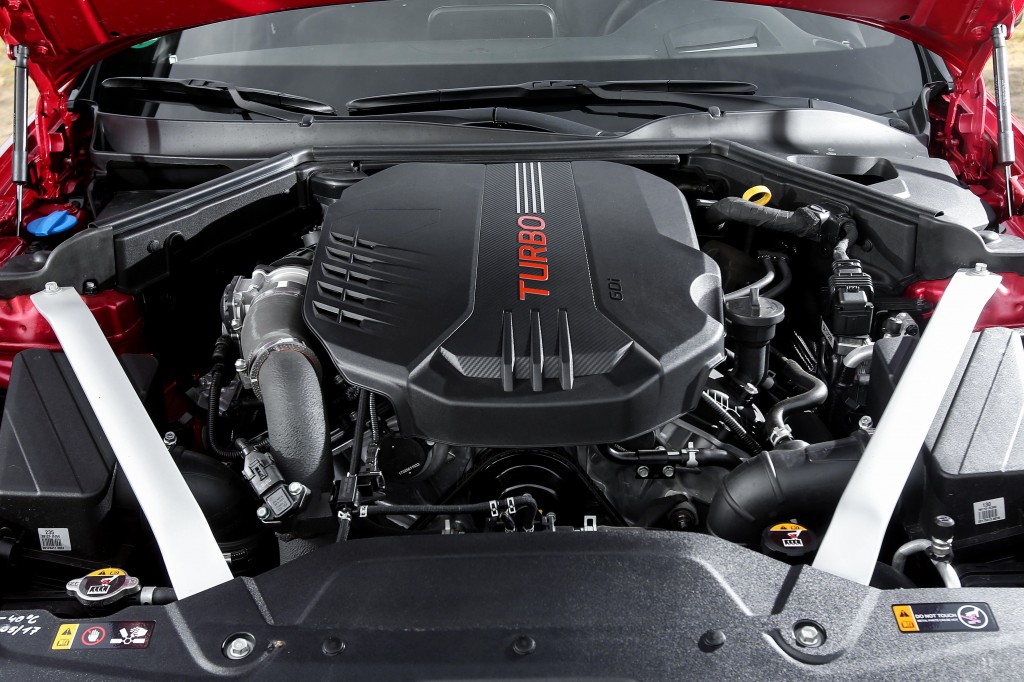 Serving as the base engine option for the Stinger in the US will be a 2.0-liter turbocharged four-cylinder with 255 horsepower, good for a 0-to-60 mph time of 6.0 seconds.

The only transmission available is an in-house-built eight-speed automatic that does an excellent job ripping off smooth and brisk up- and downshifts when left in full-automatic mode. However, shift performance isn’t quite on par with the dual-clutch units or the ZF eight-speed auto gearbox prominent in many European sport sedans. For those who like playing with steering wheel-mounted paddles, a fairly responsive manual shift function is available, but I opted to let the transmission do all the work for the majority of time around the ‘Ring.

At the end of each lap down the track’s long back stretch, the Stinger’s high-speed stability stood out. It was rock solid at 150 mph with steering remaining responsive and never getting light or floaty, adding to the car’s impressive high-performance credentials. 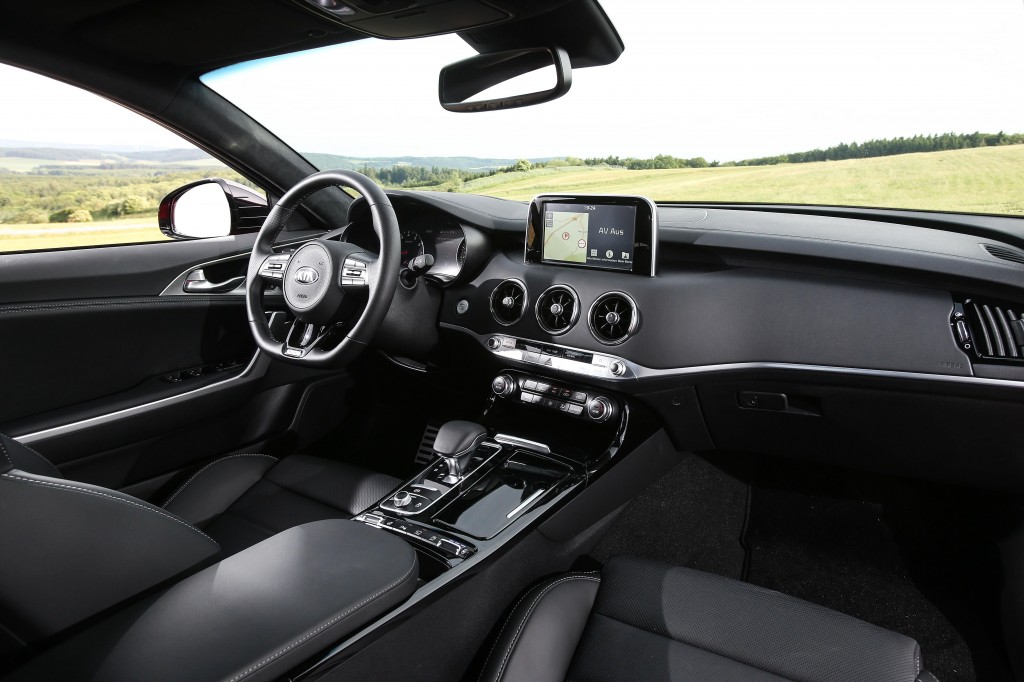 While my romp around the Nürburgring only left time for dynamic impressions, Kia did shed some more light on additional cabin technology that will be available in the Stinger when it hits US showrooms. A color head-up display, Bluetooth, wireless smartphone charging, navigation and a 15-speaker Harman/Kardon premium audio system will be available. All Stingers will come standard with the UVO infotainment system capable of running both Apple CarPlay and Android Auto.

The 2018 Kia Stinger will go on sale at the end of the year with its sights set squarely on luxury four-door fastbacks such as the Audi A5 Sportback and BMW 4 Series Gran Coupe. It also isn’t much of a stretch to think of the Kia as an alternative to the Audi A4, BMW 3 Series, Mercedes-Benz C-Class, Infiniti Q50 and Lexus IS. Kia expects pricing for the turbocharged four-cylinder to begin at roughly $30,000, while a nicely optioned V6 turbo GT should slide in at around $40,000.
Is the Stinger a serious contender to the above cars? Dynamically speaking, yes, it is darn close while offering a roomier cabin. The only question that remains is about how comfortable and compliant the Kia will be on regular roads, which is where the car will be used most of the time.

If my time around Germany’s most famous racetrack is any indication, I’m willing to wager that Biermann and his team have also made sure that the Stinger performs quite well on the street, too.