Despite all the bluster about missiles and nukes north of the 38th parallel, the big action on the Korean Peninsula is south of there. That’s where Hyundai Motor Company, together with its Kia Motors and Genesis Motors affiliates, has grown exponentially to become the fourth largest automaker in the world.

It’s a remarkable feat when you consider that South Korea has less land mass than the state of Ohio. And it’s by no means a land of wide-open high-speed motorways or engaging, serpentine back-country two-lanes. So the introduction of the 2018 Kia Stinger GT, the brand’s first rear-drive high-performance sedan, is something of a tipping point. It’s one thing to outsell Mazda, Volkswagen and Subaru, something Kia did easily last year on the strength of its value-packed, mostly front-drive small and midsize sedans, hatchbacks and crossover SUVs. But it’s quite another to take on solidly entrenched makers of entry-luxury sport sedans, especially the triple threat of Audi, BMW, and Mercedes-Benz. 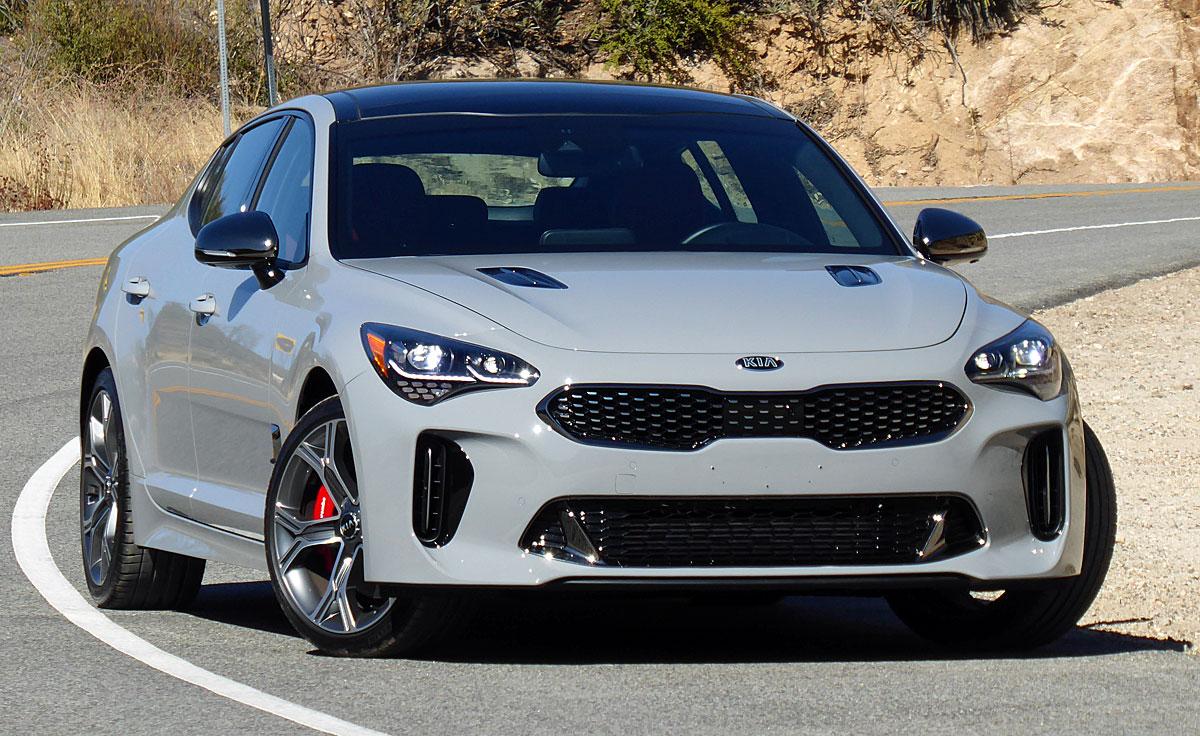 Planning and developing the 2018 Kia Stinger GT, the Korean automaker had the Audi A4/A5, BMW 3- and 4-Series, and Mercedes-Benz C-Class directly in its crosshairs. Based on the Kia GT Concept first shown at the 2011 Geneva Motor Show, the new Stinger isn’t a sedan. Like the Audi A5 Sportback and BMW 4 Series Gran Coupe with which it intends to compete, the Stinger is equipped with a fastback roofline said to be inspired by 1970’s GT cars such as the Maserati Ghibli, and it hides a cargo-friendly hatchback aperture. Kia went in this direction because research showed a growing number of buyers rejecting traditional three-box sedans for crossover SUVs due to small trunk openings. That, and Kia’s hatchback body style creates some separation between it and the upcoming 2019 Genesis G70 sedan, which shares its platform and most mechanicals with the Stinger.

The new Stinger also shares its tiger-nose grille and steeply sloping roof and rear deck themes with the handsome Kia Optima sedan, but otherwise doesn’t look much like other Kia products. A wide stance with broad shoulders gives it a road-ready look and the Stinger’s long hood and rear-wheel-drive proportions really set it apart. At 114.4 inches between the front and rear wheels, its wheelbase is almost as long as that of an Audi A7. That long wheelbase gives the Kia something those 1970’s GT cars didn’t provide — ample rear seat legroom.

There are two series of Stinger: the standard version and the Stinger GT. In standard format, the Stinger is powered by a turbocharged, 255-horsepower 2.0-liter 4-cylinder engine, and with its high level of standard equipment and an estimated base price of under $32,000, it will provide anyone seeking an alternative to a typical sedan a compelling price/value equation to ponder.

The Stinger GT, on the other hand, with its twin-turbocharged 365-hp 3.3-liter V6, upsized Brembo brakes, adaptive damping suspension, 19-inch wheels, variable-ratio steering puts the Korean upstart on the radar screen of (mostly-German) entry-luxury sport-sedan shoppers. Kia says the Stinger GT’s price will come in at about $39,000.

From a bang-for-the-buck standpoint, a new Stinger GT promising German sport-sedan levels of performance for thousands of dollars less should have legs in the market. But satisfied Audi, BMW, and Mercedes-Benz owners have honed their preferences over decades of met expectations, and cost of ownership-be-damned they’re not generally a fickle bunch easily swayed by discounts and the deal. After all, they’re buying into the brand as much as the individual product.

More than anything, surmounting this is Kia’s greatest challenge with the Stinger GT.

From the start, the Stinger was to have grand touring car proportions, which meant room for two adult couples and their luggage for a weekend drive. But beyond that, going up against German luxury brands required making the cabin a warm and inviting place to enjoy the journey.

Kia has stepped up its game in this regard, the brand taking top honors last year in the J.D. Power Initial Quality Survey. In the new Stinger you can really see the influence of Design Director Peter Schreyer, formerly of Audi, and the Frankfurt, Germany-based team that had such a strong hand in the creation of the car. The interior layout is as imaginative as anything you’ll find in an Audi, with creative use of colors, shapes and materials.

Leather seats are standard. There’s real aluminum trim decorating the cabin and generous use of hand-stitching on the doors, seats and console. A flat-screen infotainment display with Kia’s latest software and connectivity capabilities sprouts from the top center of the dashboard, measuring 7 inches wide on base models and 8 inches across with the navigation system. Redundant knobs and buttons for major audio controls are arrayed below and under that equally easy-to-use climate buttons and knobs. The design is tidy and keeps touchscreen menu-surfing distractions to a minimum.

The Stinger GT’s front seats are heated and well-bolstered for comfortable thigh and torso support. Options include air-cell lumbar adjustment and width-adjustable seat bolsters that expand or contract to fit different physiques. Thundering sound emanates from an available 15-speaker audio system with subwoofers that are located under the front seats. Even the insides of the center roof pillars are used as sound chambers for a more robust sound.

Cargo area measures a generous 23.3 cubic-feet, which is more than double the trunk size of some entry luxury sedans. Fold the rear seats down to create up to 40.9 cubic-feet of volume. The hatch also provides a large opening for loading stuff that wouldn’t fit in the trunks of most traditional sport sedans. Despite the big cargo aperture, you can feel the impressive level of body structure rigidity, something the Stinger’s development team concentrated on to meet the challenge of its very stiff-bodied German competitors. 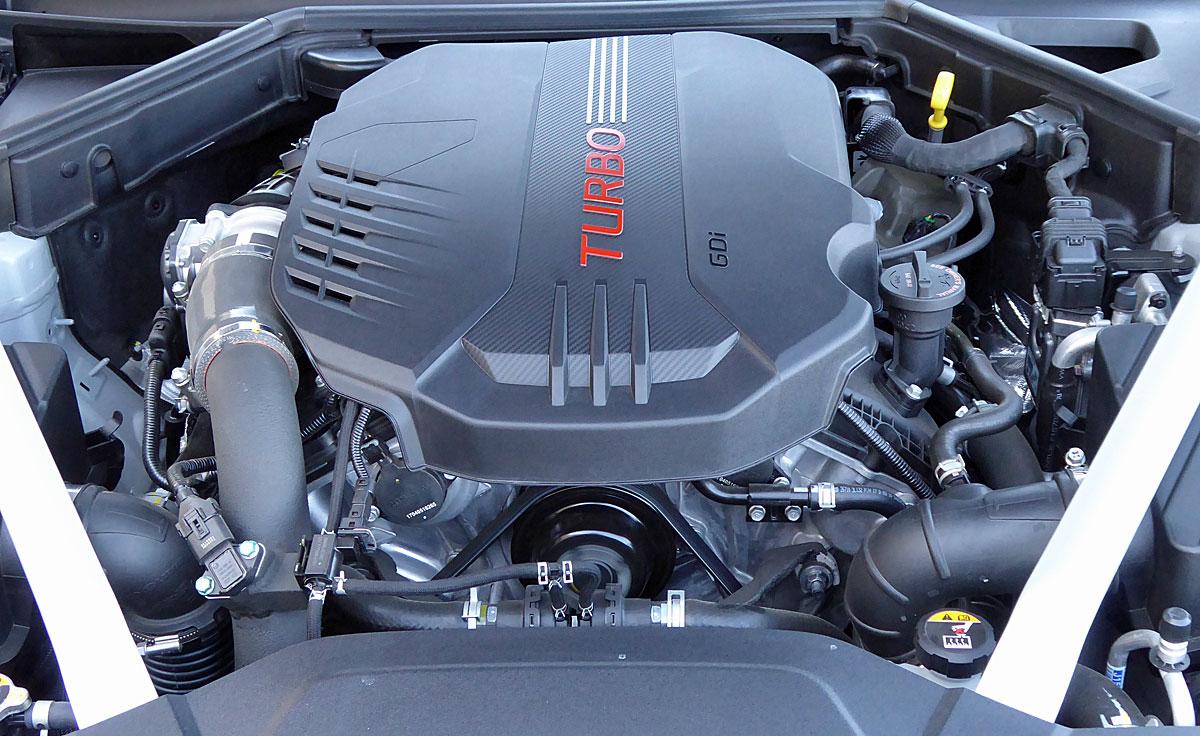 The Stinger GT’s 365-hp, twin-turbo 3.3-liter V6 is shared with Kia’s corporate cousin Genesis, where it is installed in the new G70, the G80 Sport, and the G90 flagship sedan. An 8-speed automatic transmission is the only choice, and the Stinger GT features standard rear- or optional all-wheel-drive.

Kia predicts a rear-drive Stinger GT will execute a 0-60 mph dash in 4.7 seconds, which puts it in the performance ballpark with its German rivals. A limited-slip differential on rear-drive models helps limit wheelspin. With AWD, on dry pavement the rear-biased system apportions up to 80 percent of drive torque to the rear wheels. In slippery conditions, the mix can switch to as much as 50 percent drive torque to the front wheels. A torque-vectoring feature of the AWD system can brake an inside front wheel to reduce understeer and improve steering response into a corner.

What makes the Stinger GT especially satisfying to drive is its deep well of accessible torque. The twin-turbo V6 offers up its maximum 376 lb.-ft. of torque from just 1,350 rpm up to 4,200 rpm, so throttle response is immediate and lively around town, on the highway for merging or passing, and for taking a fast line through entertaining corners on your favorite stretch of twisty road. There are five drive modes tailoring throttle response, shift points, shock damping and steering effort, selectable by a console-mounted switch. They include Eco, Comfort, Sport, Custom and Smart, the latter probably the best default choice for mixed driving.

The Stinger GT gets a full belly pan and other aero tweaks. It’s chipped to an autobahn-worthy maximum velocity of 167 mph. I saw an indicated 142 mph in a dead-nuts-stable but too-brief burst around the high-speed oval at the Hyundai Technical Center (HTC) in Mojave, California. Not only did the GT feel absolutely planted at triple-digit speeds but it was also pleasantly free of excessive air rush noise, especially around the side mirrors and B-pillars where many cars lose their cool. And even though the Stinger is technically a hatchback without a solid bulkhead behind the rear seat, there was very little road sizzle drifting into the cabin from the cargo bay.

Meanwhile, despite the twin turbochargers, which are notorious buzzkill for a hearty exhaust sound, there’s just enough “sting” from the V6’s quad-tipped exhaust to let you know you’re driving a performance car. 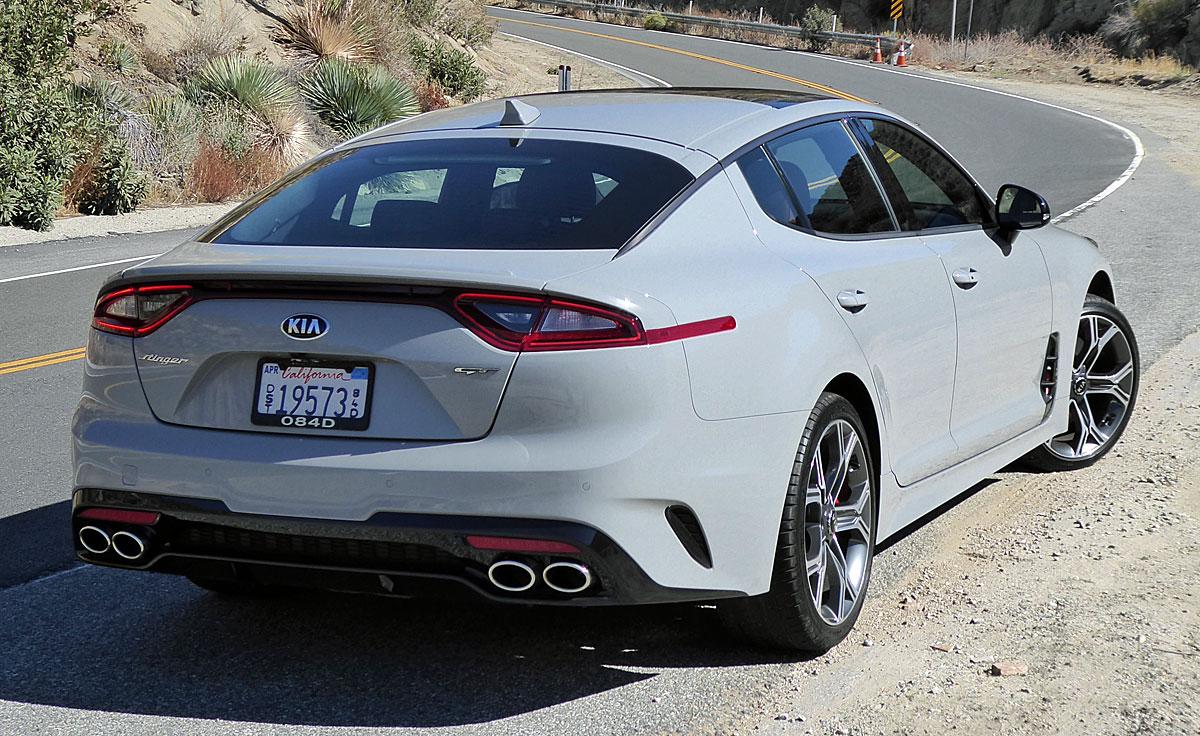 Kia was so confident in the dynamic capabilities of the new Stinger GT that it offered up an Audi S5 and A7, a BMW 4 Series Gran Coupe and a Porsche Panamera among others for my evaluation at the HTC skidpad. Engineers laid out a challenging autocross course and I was able to take the Stinger GT and competitors through the cones with abandon. In short, the Stinger felt every bit as nimble and capable as the Audis, BMW and Porsche.

Here, the hand of chassis tuning master Albert Bierman (previously with BMW’s M Division), who paid special attention to crafting the GT’s suspension damping curves and steering feel, was clearly evident. Both on the skidpad as well as the challenging curves and fast mountain sections of the Angeles Crest Highway, the Stinger GT legitimately felt “German.”

The Stinger GT goes on sale in December, 2017. Nothing in Kia’s DNA suggests the Korean car company can pull this off aside from pure grit. But if top J.D. Power Initial Quality Survey scores in recent years, a highly regarded warranty, undeniably appealing design, and the meteoric rise of the brand over the course of the last decade has any bearing on the matter, the Stinger GT has a legitimate shot at joining the premium German brands at the luxury sport-sedan party.