“Drifting exercises will take place on the concrete skidpad,” instructs Albert Biermann, the gentleman tasked with heading testing and high performance development of Kia’s upcoming sport sedan. While the words ‘drifting’ and ‘Kia’ have been mutually exclusive for the past twenty years ― never to touch each other in the same sentence ― the South Korean automaker is drastically altering its course. Later this year, Kia will launch the 2018 Kia Stinger ― a turbocharged, rear-wheel drive, four-door engineered to compete directly against the Audi A5 Sportback and BMW 4 Series Grand Coupe.

You read that correctly. Kia, an automaker that made a name for itself with reliable, low-cost, vehicles targeting mainstream consumers has realigned its sights. The premium sedan segment, dominated by a handful of Europeans for years, is now in its crosshairs.

“The new Kia Stinger is a true gran turismo, a car for spirited long-distance driving,” explains Gregory Guillaume, Kia Motors Europe’s Chief Designer. “It’s not about outright power, hard-edged dynamics and brutal styling all at the expense of luxury, comfort and grace. The Stinger has nothing to do with being the first to arrive at the destination – this car is all about the journey. It’s about passion.” 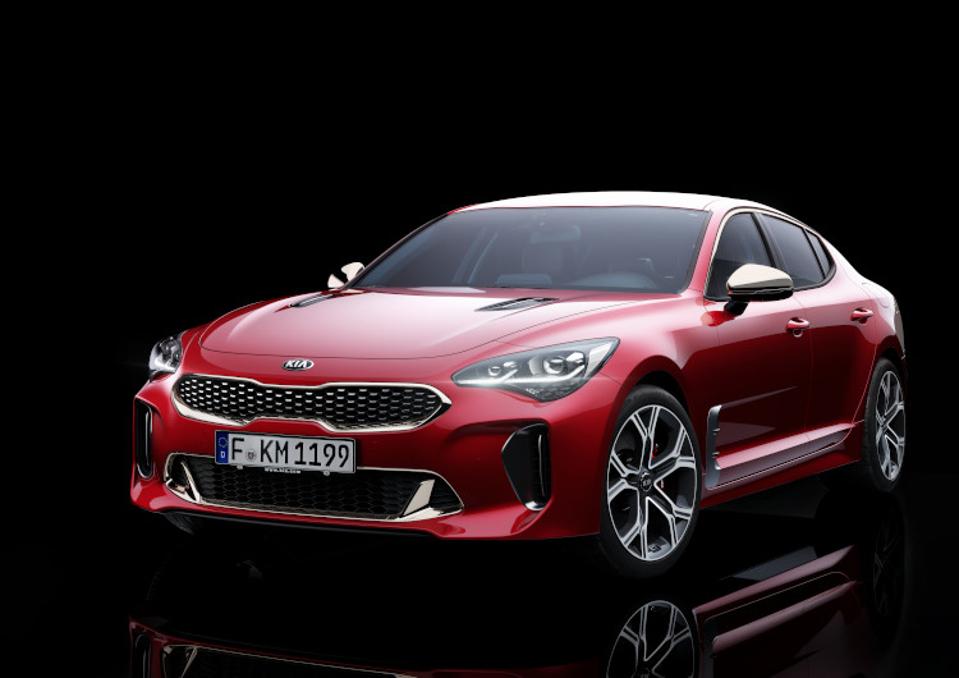 The passion that Guillaume romanticizes about was sparked by the Kia GT concept that was revealed at the Frankfurt Motor Show in 2011. That forward-looking prototype was a powerful rear-wheel drive sport sedan that tugged at the heart of Kia’s car enthusiast designers (and, being frank, most passers-by at the European auto show). “The Kia design team is full of car guys and girls. Cars are deeply rooted in our culture. We love cars – they’re in our hearts and in our blood,” professes Guillaume. The glistening pearl white GT concept would be the catalyst for the production of the Stinger, an all-new vehicle with a name paying homage to the GT4 Stinger concept revealed at the Detroit Auto Show in 2014.

Five years after the concept debuted in Frankfurt, I’m standing in a building at Kia’s research and design center outside Seoul, South Korea, peering at a near production-ready Stinger sedan — and it appears, at first glance, undeniably striking. 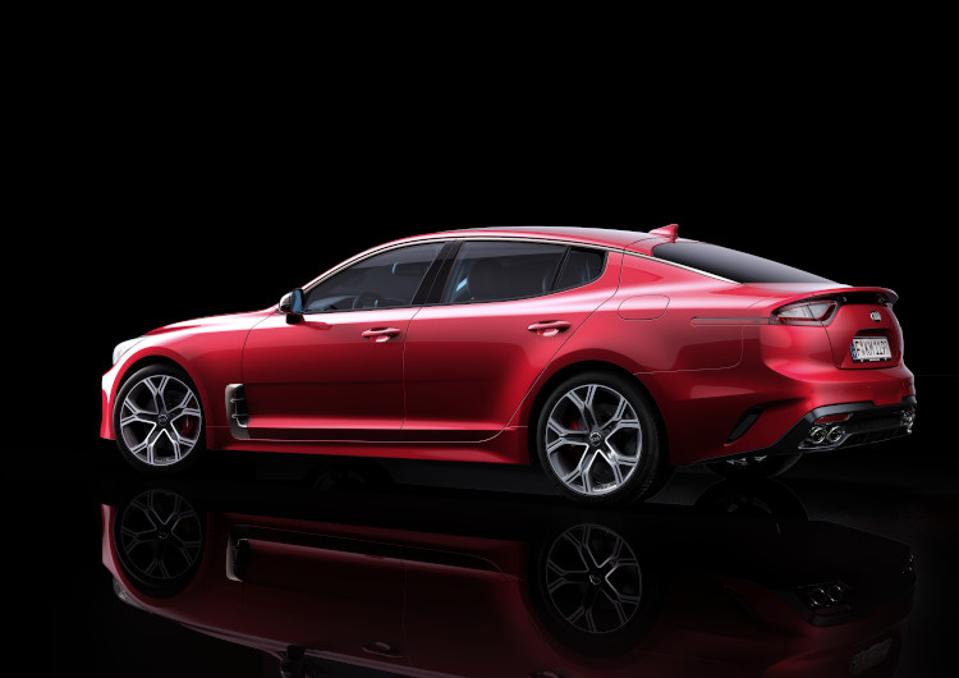 As expected, some of the radical show car touches meant for flair (e.g., rear-hinged back doors, flush handles and exterior mirrors mounted on the quarter panels) have disappeared, but the overall theme — a sporty and aggressively styled fastback — has been retained. A tape measure reveals that it is physically longer, wider, and taller than the Audi and BMW that it will compete against. Its overall look, led by Kia’s signature ‘Tiger Nose’ front grille, is well-proportioned and very European ― I see hints of Audi and Porsche from various angles. The design is fresh, cohesive and not over-styled like many of today’s Asian offerings.

The interior cleverly borrows more styling cues from the Europeans ― Audi, Mercedes-Benz and Jaguar come to mind. The cabin is intelligently configured, more traditional than futuristic, with a sporty upscale feel and premium materials. Best of all, the Stinger’s greater exterior dimensions and longer wheelbase translate to more passenger room than within the Audi A5 Sportback and BMW 4 Series Grand Coupe. 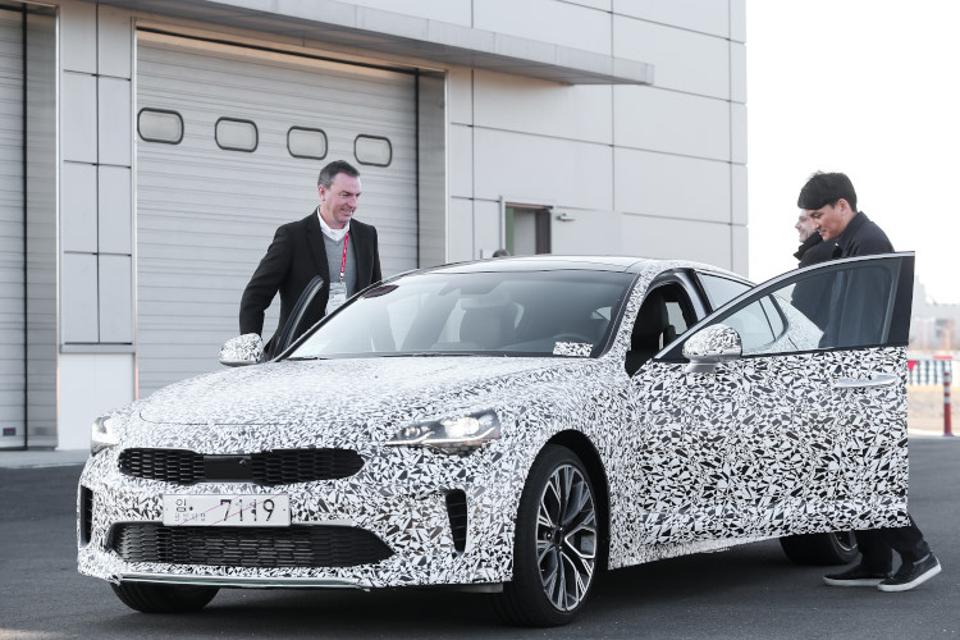 After a few hours poring over static models, I am escorted outside to Kia’s expansive test track where I meet up with a couple of camouflaged “test mules” (an industry term for pre-production vehicles) visually disguised in a black-and-white, triangle-speckled, vinyl wrap. The color scheme, which is meant to confuse spying eyes by hiding a vehicle’s character lines, doesn’t dissuade me from the mission ahead — Kia is allowing me to drive two early prototypes on its test track.

Eager like a 12-year-old, I drop behind the wheel, quickly adjust the seat and mirrors and then press a round start/stop button that is located to the right of the steering column. The turbocharged engine fires to life with a muted growl.

Kia explains that it will offer several variants of the sedan. Standard models, which will be sold as the ‘Stinger,’ arrive with a turbocharged 2.0-liter four-cylinder rated at 252 horsepower and 260 pound-feet of torque. That powerplant aligns nicely with Audi and BMW’s base 2.0-liter engines in terms of output. However, Kia takes the upper hand with the engine that is fitted to the ‘Stinger GT,’ which is a twin-turbocharged 3.3-liter ‘Lambda’ engine boasting 365 horsepower and 376 pound-feet of torque. That engine is significantly more powerful than both Audi and BMW’s 3.0-liter offerings, a fact that is mostly credited to its slighter larger displacement. An eight-speed automatic transmission, manufactured in-house, is the sole transmission. 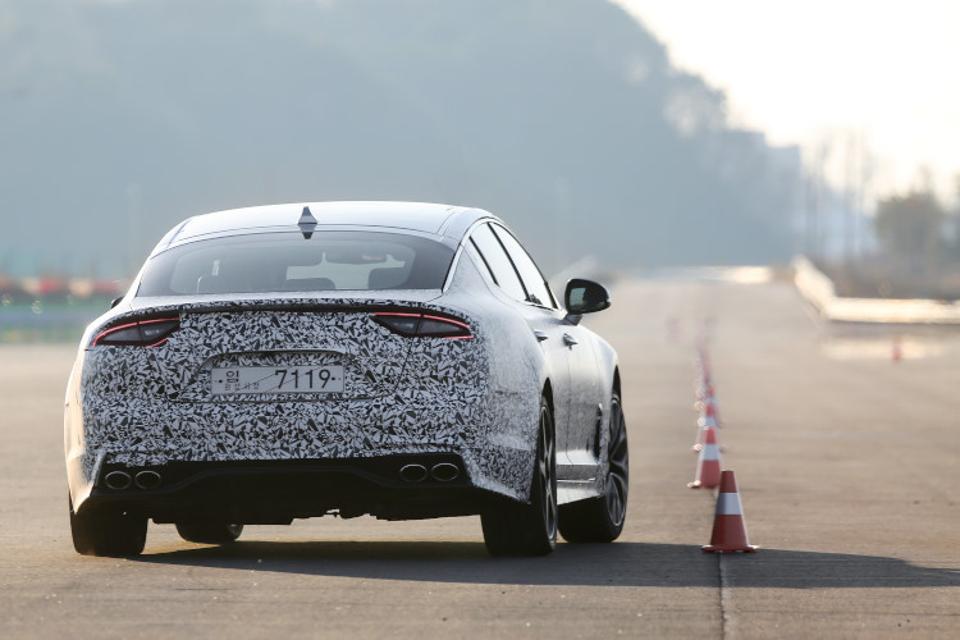 Kia won’t disclose the precise architecture (I’m betting the platform is shared with the future Genesis G70), but it does say that rear-wheel drive (RWD) is standard, with all-wheel drive (AWD) optional. The RWD models vaunt a sporty mechanical limited-slip differential, while rear-biased AWD models are equipped with a sophisticated Dynamic Torque Vectoring Control. The suspension design utilizes MacPherson struts up front and a five-link design in the rear — both have been engineered to take advantage of Kia’s Dynamic Stability Damping Control (DSDC), a driver adjustable suspension.

I’m behind the wheel of a Stinger GT AWD model, fitted with the twin-turbocharged V6, with its nose pointed towards a challenging dynamic handling circuit. With the driving dynamics mode set to ‘Sport,’ I complete a slow reconnaissance lap before mashing the accelerator the floor. The acceleration is linear and strong but accompanied by an unexceptional amount of audible ferociousness as the speedometer needle climbs around its analog dial. The first few turns are shallow and quick, and the Kia glides through them rather painlessly with a moderate amount of body roll. The electrically assisted steering feels good (the motor is bolted to the steering rack to improve response) and extremely precise. The feedback through the wheel allows me to take pride in the fact that I can guide the sedan through the circuit’s apexes nearly flawlessly. 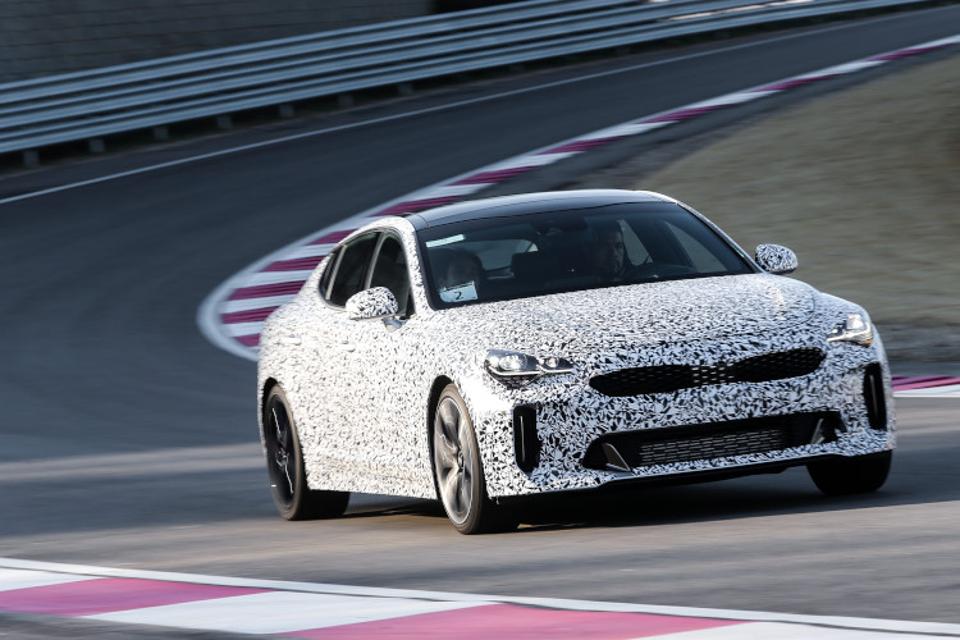 Wide-open throttle out of the corner commands a few rapid downshifts from the automatic gearbox. The gear changes are smooth and well executed (manual control of the steering wheel-mounted paddles delivers shifts that are 20% faster), pushing me back into my seat as the speed increases. At the end of the straight, nearing triple digits, I mash the brake pedal mercilessly hard. High performance four-piston Brembo calipers, which are standard on the Stinger GT, promptly cut the velocity by half as I enter the left sweeper (the brakes feel strong — subjectively better than the brakes on a BMW or Audi). Unfortunately, I’m still carrying far too much speed. Despite trail braking to slow my pace, the Stinger GT resorts to significant understeer and the Kia’s Vehicle Stability Management (VSM) and Electronic Stability Control (ESC) join together to ruin the party.

My next lap is much better. After dancing through the curves, I brake harder for the left sweeper at the end of the straight and get on the throttle early. Power to the wheels allows the torque vectoring system to guide the AWD sedan around the turn. There is still understeer and body roll, but no more than I would expect from a standard Audi or BMW, and it’s completely manageable. I mentally take note that this is the heaviest Stinger model — Kia won’t discuss specifics about mass, but my well-honed derrière says it weighs about 3,900 pounds. The Stinger GT AWD is enjoyable, but I really want to drive the enthusiast-tuned, rear-wheel drive, configuration.

The engineers answer my wishes with the opportunity to drive a Stinger GT RWD model on the company’s expansive test pad. First, I run through a high-speed slalom — an exercise that is a walk in the park for the sedan. Next, I take a few untimed acceleration runs on a long straight (expect the 2.0-liter to sprint to 60 mph in about six seconds flat. The 3.3-liter should do the same about a full second quicker). The GT demonstrates abundant muscle, but I do wish for a more aggressive exhaust note under wide-open throttle. 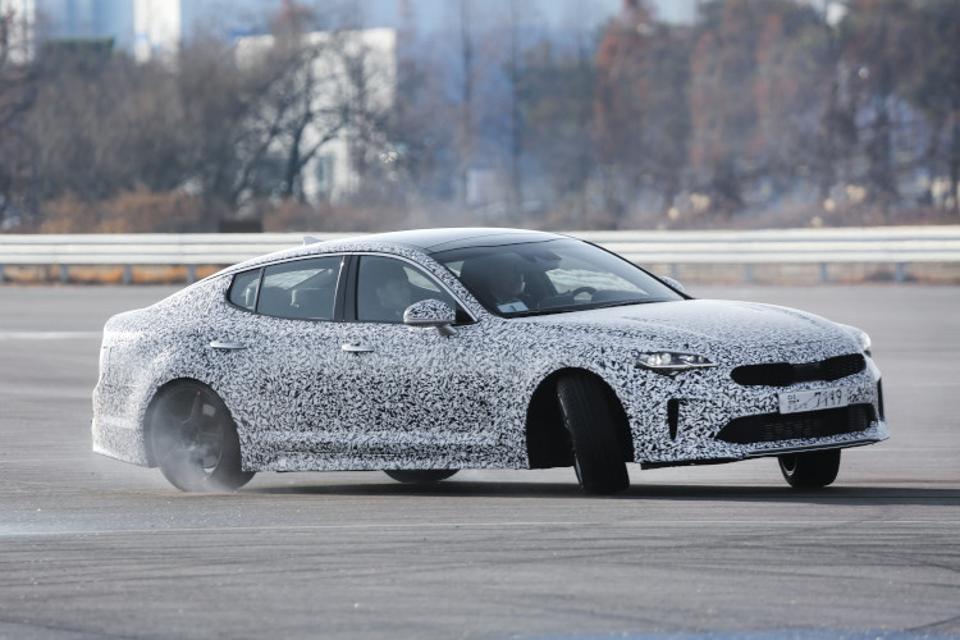 After a few stand-on-the-pedal braking exercises, which are violently dramatic yet effortless tasks for the Stinger (I don’t sense any fade), I am directed to an enormous concrete skidpad for drifting exercises. Drifting… in a Kia?

I can light up a pair of rear tires with ease when there’s 376 pound-feet of torque at the other end. Punch the Stinger GT in a corner at low speeds and it behaves like a well-mannered muscle car, slickly breaking both rear tires free in magnificent oversteer. I’m no Ken Block, so my sideways action typically results in a momentary glorious drift followed by an embarrassing full spin — no worries when the skidpad extends a few hundred yards in every direction. Someone with real talent will be able to ‘cord’ a set of rear tires in fewer than three minutes in the new Kia.

The handling circuit, slalom, acceleration runs and drifting exercises convince me that the Kia Stinger GT is the real deal — a bona fide sport sedan. That statement comes as no surprise to Guillaume, who tasked his team with engineering a vehicle that “looks the way it drives and drives the way it looks.” Kia even honed handling dynamics at a famed German racing circuit, but the objective wasn’t to set lap records like a race car. “That goes against the spirit in which the new Stinger was created,” explains Guillaume, “We used the Nürburgring to ensure the Stinger is capable of taking every kind of extreme road in its unflappable stride.” 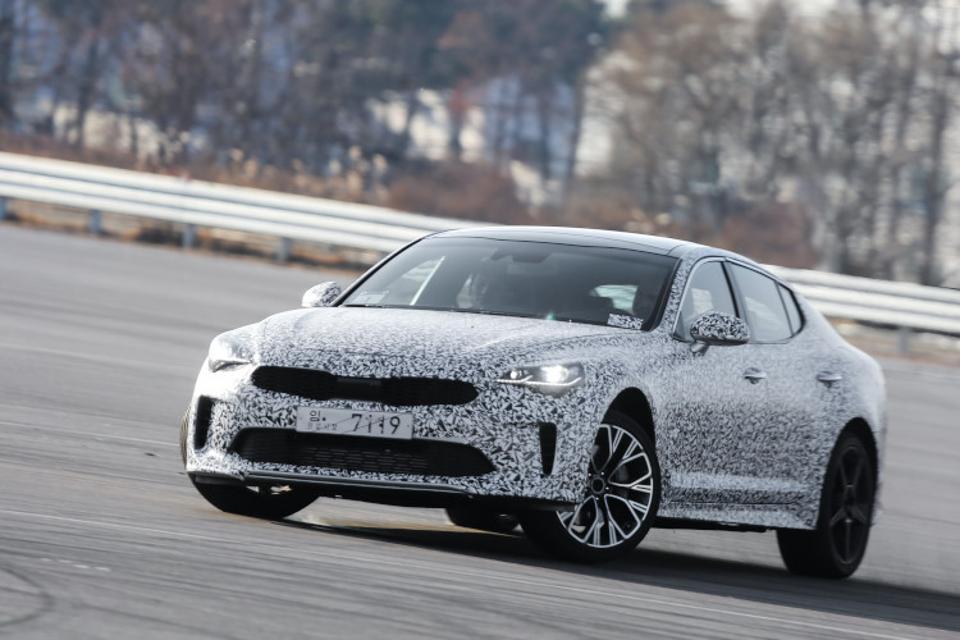 The comments from Kia’s chief designer support my seat-of-the-pants impressions ― despite a specification sheet and chassis tuning that supports racing circuit prowess; the Stinger GT is a premium sport-tuned gran turismo for an everyday driving enthusiast, not a hardened competitor to the Audi S4, BMW M3, or any other challenger in that racy segment. Rather than fit ridiculously sticky tires, expensive carbon-ceramic brakes or a slew of nonsensical go-fast upgrades to chase numbers on a stopwatch, the engineering team focused its efforts on something that most automakers have long forgotten ― evoking driving emotion. The Stinger has character, and it’s fun to drive. BMW used to build vehicles like this ― is it possible that Kia has engineered a more emotional vehicle than the Bavarians?

“You cannot believe how excited I am about this car,” says Peter Schreyer, Kia’s Chief Design Officer. “The new Kia Stinger is going to fundamentally change the global image of Kia. I have no doubt it will revolutionize the way people think about us. It’s going to propel us upwards into a different era.”

Revolutions don’t take place overnight, but Kia is confident that those who slip behind the wheel of the upcoming Stinger and Stinger GT later this year will be thrilled with the styling, coddled by the premium interior and undeniably captivated by its driving dynamics. My one-day stint driving early prototypes in Korea left me genuinely impressed and craving more seat time, which is precisely the reaction that Kia’s designers and engineers are seeking. 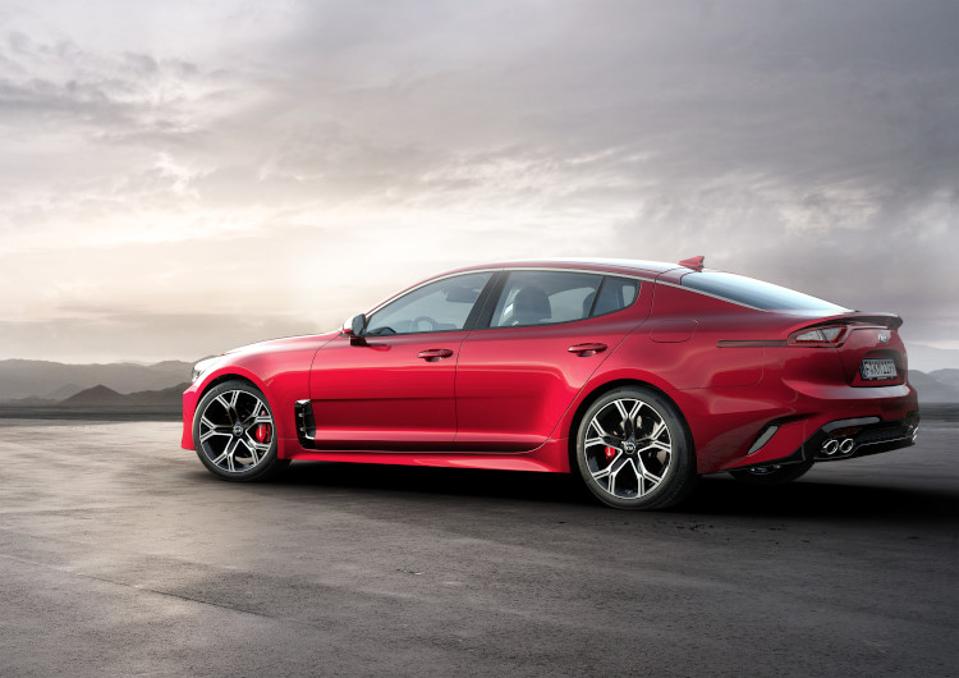