Can we all agree that Kia had better quit making awesome-looking concept cars unless it plans on building them? Good, because in the past few years we’ve seen the amazingly gorgeous GT, Track’ster hot hatch, and even the funky Provo hybrid—hit show stands to raucous fanfare before being hustled away, perhaps to some secret bunker near the demilitarized zone at Korea’s 38th parallel. So far, the most tangible link between any of those cars and a real Kia materialized in the form of the 2014 Soul, which wears some styling cues shared with the Track’ster. But where’s that design exercise’s turbo four? It’s three-door body style? Exactly.

Now along comes another stunning show car from the Korean brand, one that bellows loud and clear the strong message that Kia is no longer up and coming, but fully and completely arrived and ready to take on the fun-to-drive crowd. Forget this newest concept car’s slightly silly name—GT4 Stinger—and focus on the key details: It’s a compact, rear-drive 2+2 coupe designed around simplicity, lightness, and driving fun. And did we mention it’s got a turbo four and a proper six-speed manual? 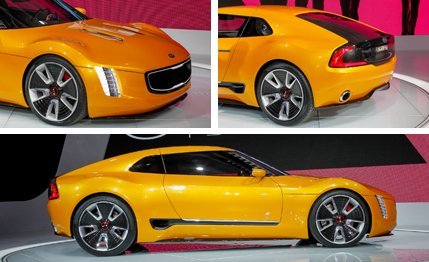 Naturally, by now your mind has drifted to the GT4 Stinger’s obvious competitors, the Subaru BRZ and Scion FR-S twins. Much like those cars, the Kia features tidy dimensions and a light curb weight, claimed here to be around 2800 pounds. Dimensionally, the Stinger casts a slightly larger shadow than the Scibaru siblings, with a 1.9-inch-longer wheelbase, an extra three inches of length, and a substantial 4.5 more inches of width. Its roof also is 1.4 inches closer to the ground than the BRZ’s and FR-S’s.

The Kia further sets itself apart from the Japanese twins with its snappy styling, conceived in the automaker’s California design studio (which also turned out the slick Track’ster concept). Its clean lines and classy detailing give it a far more grown-up look than the boy-racer BRZ and FR-S, and we dig the Kia’s more useful rear hatch. The profile has a lot of Audi Quattro in it, although that C-pillar isn’t doing blind-spot visibility any favors. Kia kept the hood as low as possible—attractive and bold in today’s pedestrian-impact-standards-driven world—necessitating elegant fender peaks to clear the concept’s huge staggered-width 20-inch center-lock aluminum and carbon-fiber wheels. The brand’s signature grille is set low in the front fascia, flanked by a pair of vertical LED headlights with integrated brake-cooling ducts.

Moving to the car’s hindquarters, there is a blacked-out panel, reminiscent of the latest Soul hatchback’s tailgate treatment, which flows into the dark-tinted backlight. A pair of C-shaped taillights glow from behind the black-out area, and the simple bumper houses two big, round exhaust outlets. Perhaps the Stinger’s most-ambitious design details are its partially see-through A-pillars. From the inside, a series of drilled-out voids in the pillar allow for a nearly 270-degree front view and contribute to a lighter structure, at least according to Kia. From the outside, the blacked-out pillars give the windshield a wraparound look, which the automaker says looks like “wraparound sunglasses.” Since that sort of eyewear hasn’t been cool for a long time, we’ll simply override that statement with our own: Wraparound windshields look good, ’80s sunwear be damned. 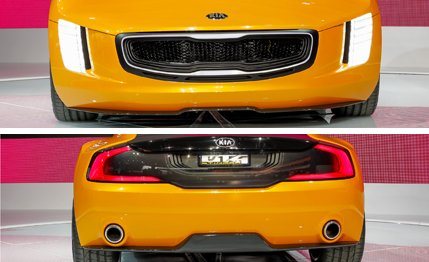 How Expensive Could This Thing Be to Build, Anyhow?

Considering Kia claims there is no current plan to put the Stinger into production, and the company doesn’t have access to a rear-drive platform of this size, the concept rides on a custom chassis. But it sounds like it’s a nice custom chassis, with a four-corner double-wishbone independent suspension, 15-inch Brembo brakes, and a pleasant 52-percent front, 48-percent rear weight balance. To help keep the car’s weight down, Kia stripped the interior of nearly everything that doesn’t directly have to do with driving the car. There’s no radio, no carpeting (the floor is covered in a Honda Element–like rubberized coating), and the door pulls are racy suede straps poking out of the door panels. A simple and futuristic-looking LED-lit gauge cluster floats above the steering column, and it places the tach front and center, relegating speed info to a central digital readout. A pair of sweet sport seats and a chunky three-spoke, flat-bottomed steering wheel finish off the purposeful interior.

The GT4 Stinger throws the hypothetical gauntlet at the BRZ/FR-S with its engine, however, which boasts 315 horsepower and a turbocharger. It might not have the center-of-gravity-aiding low profile of the flat-four powering the Japanese coupes, but we think an extra 115 horsepower is a pretty decent tradeoff. Best of all, the direct-injected 2.0-liter turbo four actually exists in Hyundai/Kia’s portfolio already. Even better than that? Kia says that this same engine, converted for racing specification in its Pirelli World Challenge Optima sedans, makes a whopping 400 horsepower. Uh, yes, please.

In fact, speaking of Kia’s racing efforts, the automaker is quite proud of its success in Grand-Am with its Forte Koups and Pirelli World Challenge with the aforementioned Optimas—so much so that it feels an enthusiast special like the GT4 Stinger is a natural depository for the brand’s engineering resources. We must admit, we’re all for it, especially given how increasingly excellent Kia’s products have become in recent years. The one thing most of those cars are still missing, however, is the kind of chassis tuning and handling harmony that makes, say, a Mazda such a joy to drive. As the chief designer at Kia’s California studios puts it, “If anyone were to ask if Kia has the credibility to build a car like the GT4 Stinger . . . I would simply point out that Kia races—and wins—against some of the world’s most legendary performance brands.”

Is that a bit headstrong, especially for a company that still farms out the majority of its race-car construction to a third party (Kinetic Motorsports)? Sure, but color us excited to see Kia getting eager to cater to driving enthusiasts and let its performance-bragging flag fly. Lately, Kia has been trying to increase its enthusiast cred with efforts like the 2014 Forte5 SX Turbo and the release of a limited-production, up-level Rio5 SX with a manual transmission. But these are small potatoes compared to a full-blown sports car. Please build this one, Kia, for us.