With its restyled, retooled, re-engineered 2015 Sedona, Kia aims to compete and undercut at the highest level of luxury and convenience.

LAKE ELSINORE, CA.—Now this is the way to properly test a vehicle. Stretched out in the reclining back seat with a latte in hand, adjusting the air-conditioning and telling the driver to not spare the horses.

A Rolls-Royce Phantom? The new Maybach? No — a minivan, and a Kia at that. 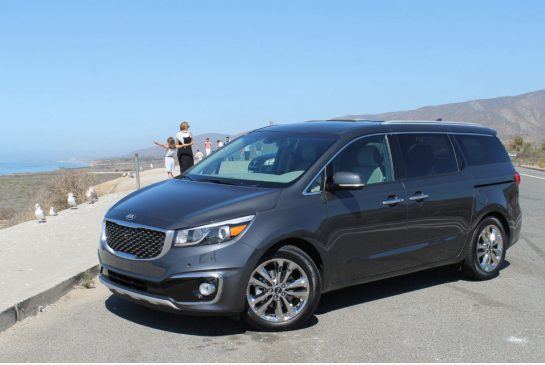 Love ’em or hate ’em, minivans really are the most comfortable vehicles on the road. Lots of space and headroom, plenty of cargo room, and a smooth, wallowy ride that’s like flying business class far above any turbulence.

The top-of-the-line version of the new Kia Sedona is especially like that, with its leg rests for the second row that let you stretch right out, just like in the Toyota Sienna.

Between sips on my latte, I’m comparing notes with the driver. He’s another auto hack like myself, and he drew the short straw to be behind the wheel for this half of our California road trip. Not that it’s bad to be driving — it’s just not so relaxing as being stretched out in the back.

A Rolls-Royce Phantom? The new Maybach? No — a minivan, and a Kia at that.

We’re trying to think of what’s unique about this latest generation of the Sedona, what sets it apart from its competition.

After all, the Toyota Sienna had those reclining seats and now has the new Easy Speak feature, letting the driver talk through the rear speakers to the third row. It also has optional all-wheel drive. Both are unique to Toyota.

The Honda Odyssey has a built-in vacuum cleaner, albeit something of a gimmick, and underfloor storage. It can also run on fewer cylinders to save fuel.

The Dodge Grand Caravan and Chrysler Town & Country go even further with the underfloor storage, tucking both rows of seats neatly under the carpet to create a completely flat floor. Current incentives undercut all the other prices.

So what does the restyled, retooled, re-engineered Sedona have? “There’s the Drive switch!” calls out my colleague suddenly, after several minutes of scanning the cabin while I sat with eyes closed, music in my head.

“It switches between Eco, Comfort, and Regular to change the steering feel and gear-shift patterns. Here, I’ll put it in Comfort now. Oooh — feels looser!”
He kept jabbering on as we cruised up the interstate toward Lake Elsinore, flipping the switch between the three Drive settings. In truth, when I took the wheel later and flipped the switch for myself, I couldn’t tell any difference.

I’m sure it was there but it just didn’t really matter. This is a minivan, after all. Leave it on Regular and get the kids to soccer.

In fact, Kia’s put a lot of thought into this new van. It’s not a big market in North America and the models mentioned above are all that remain to choose from, as buyers shun the suburban stigma of the minivan in favour of large SUVs.

The Sedona is completely redesigned to compete for those other van buyers, offering similar features for less. There are seven different trim levels for the new Sedona, starting at $27,495, which is $1,200 cheaper than the 2014 model, and rising all the way to $45,995.

That’s almost $6,000 more than the current top-of-the-line Sedona, which demonstrates Kia’s intention to compete and undercut at the highest level of luxury and convenience.

From the outside, the new Sedona gets a flatter nose with a mesh grille, which is supposed to denote “bold SUV styling” for any buyers still on the fence. There’s a rear spoiler and “dynamic rear-quarter glass,” as well as LED lights front and back.

Under the hood is the new 3.3L Gas Direct Injection V6 engine from the Sorento, which creates 276 hp and 248 lbs.-ft. of torque. That’s slightly ahead of the Japanese minivans but a little behind the 283 hp of the Dodge and Chrysler. All models have a six-speed automatic transmission and can tow 3,500 lbs., like all the competition.

But minivan buyers don’t really care about the niceties of the engine and drivetrain, except for fuel consumption.

Official consumption figures vary with the models, mostly due to their different weights. The SX gets a combined 11.4 L/100 km with its Eco setting, but the loaded SXL+ we’re driving gets an official 12.5L/100 km.

In fact, we’ve been getting an indicated average of 17.8 L/100 km on our test drive, which includes city streets, interstate and a mountain road. That’s thirsty, but it’s not scientific, and I did tell the driver to not spare the horses.

Most drivers are more concerned for comfort and convenience, which is what I’m thinking about with my eyes closed as we drive north.

There’s a large, 8-inch colour central display screen for Navigation and other information, and all models except the very base also use that screen for a rearview camera.

The $35,495 SX level and above is where the van starts getting luxurious, with a power tailgate, the selectable Drive switch, a heated steering wheel and heated second-row seats, and automatic climate control.

At this level, you also get blind-spot detection and front- and rear-obstacle detection, flashing a warning at the driver if something’s in your path.

Various different trim levels offer either seven- or eight-passenger seating, but you need to go up to the $40,995 SXL if you want the second-row reclining “aviator” seats, which limit space to seven people.

There’s another price to be paid for the fancy seats, though. While the third row folds flat under the floor in all levels, the second row folds up vertically and pushes forward against the back of the first row. The aviator reclining seats are thicker and so take more space for this.

Like the Honda and Toyota, the second-row seats are a pain to remove and don’t provide the superior cargo room of the stow ’n’ go Dodge and Chrysler. It’s still a lot of space though, and more than an SUV — plenty of area to lay down a bicycle, for example.

The SXL also has two sunroofs, with the rearmost panel operated by the rear passengers.

If you want Navigation, you must top out with the SXL+, which also has adaptive cruise control, forward collision warning and lane departure warning, and a 360-degree camera on the central display.

None of the models, however, include a DVD system for passengers. A few years ago, when my kids were younger, I would have thought this unforgivable. Now they’re teenagers and never forsake their cellphones for screens, so I no longer care to buy them in a minivan.

But I have my eyes shut and I’m just enjoying this drive. My colleague is still switching between the Drive modes to try to feel a difference. It’ll be my turn to take over the wheel soon, so I’ll take another sip of latte now and enjoy the coffee for its sweetness.

A minivan, and a Kia at that. Who’d have thought it?

WHAT’S WORST: Probably thirsty, no Navigation except at top trim, no DVD

WHAT’S INTERESTING: More than half the body structure of the new Sedona is made from ultra-high-strength steel, compared to eight per cent of the current Sedona.