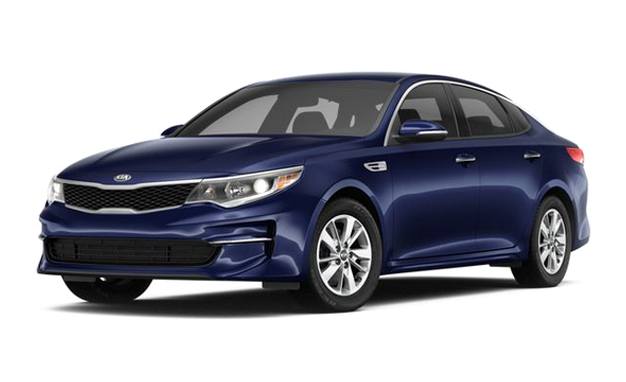 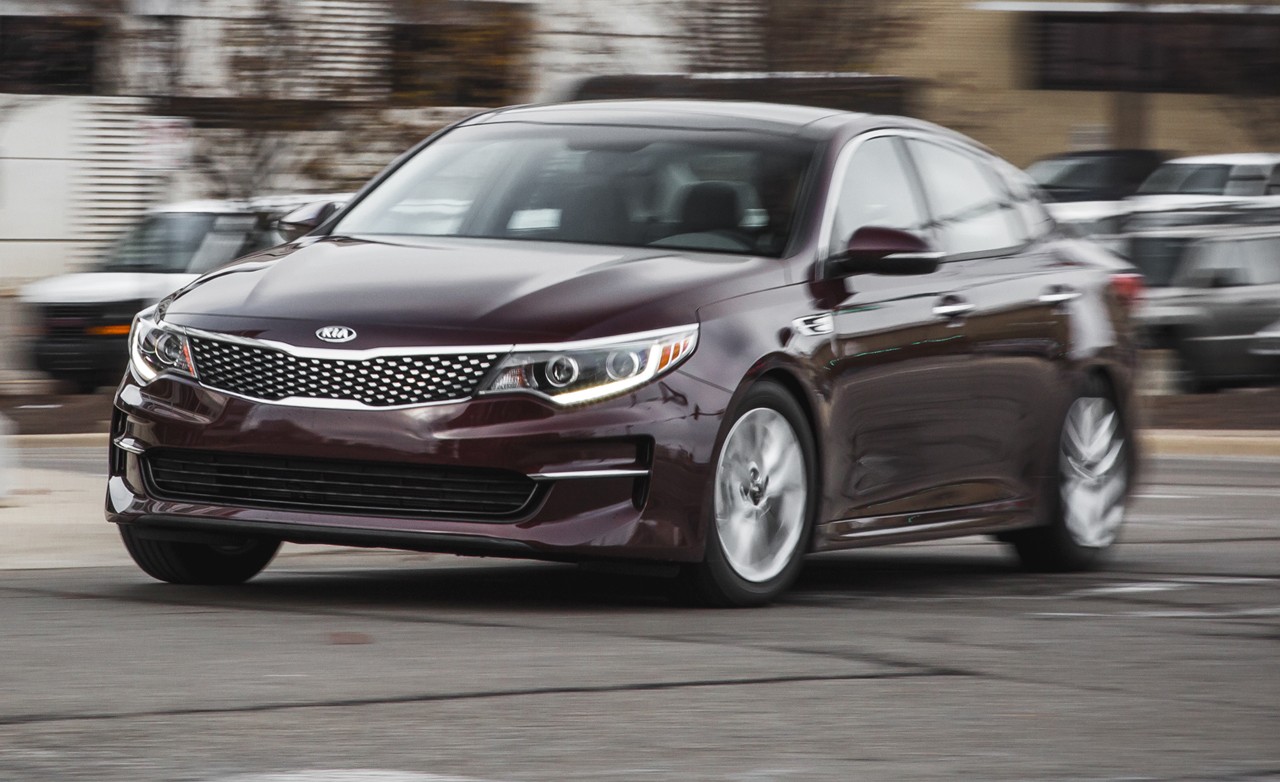 Even with the lineup’s least-interesting engine, the Optima impresses.

It’s indicative of how established Kia’s Optima has become that we’ve been reduced to picking nits among its three available gasoline engines. (An Optima hybrid also is offered.) After all, having raised interior quality to acceptable levels with its 2006.5 Optima, style and handling with the 2011 Optima, and firmly entrenching the sedan as a solid all-around choice with this latest revision for 2016, Kia leaves little to complain about in its mid-size sedan.

So, let’s address that single major complaint right away, then. The standard 2.4-liter four-cylinder is our least favorite Optima motivator. It’s a workable engine, but the direct-injected 2.4 lacks the smoothness of the optional turbocharged 1.6-liter four and the power of the top-spec turbocharged 2.0-liter. Kia fits the 2.4-liter to the base Optima LX and the mid-level Optima EX (tested here), with the turbocharged 1.6-liter between them in the LX 1.6T model. The turbocharged 2.0-liter is the sole powerplant for the range-topping Optima SX and SXL trims. 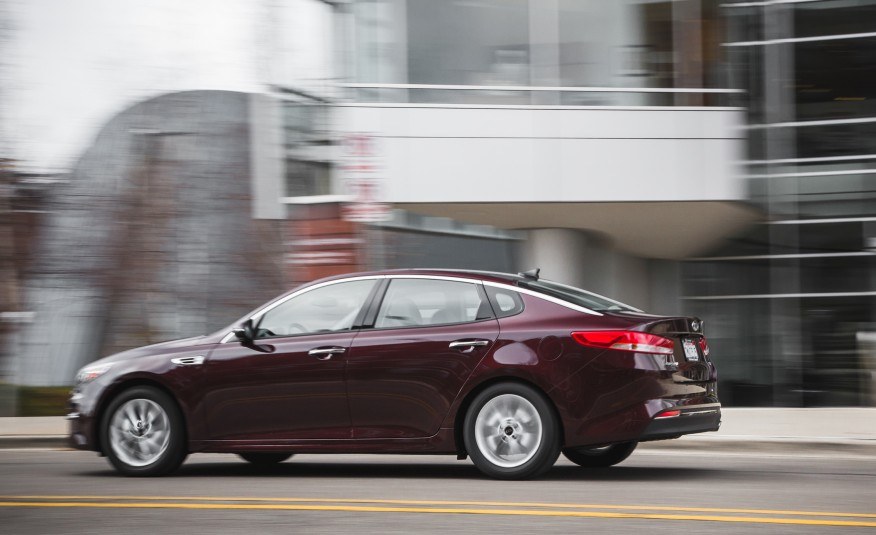 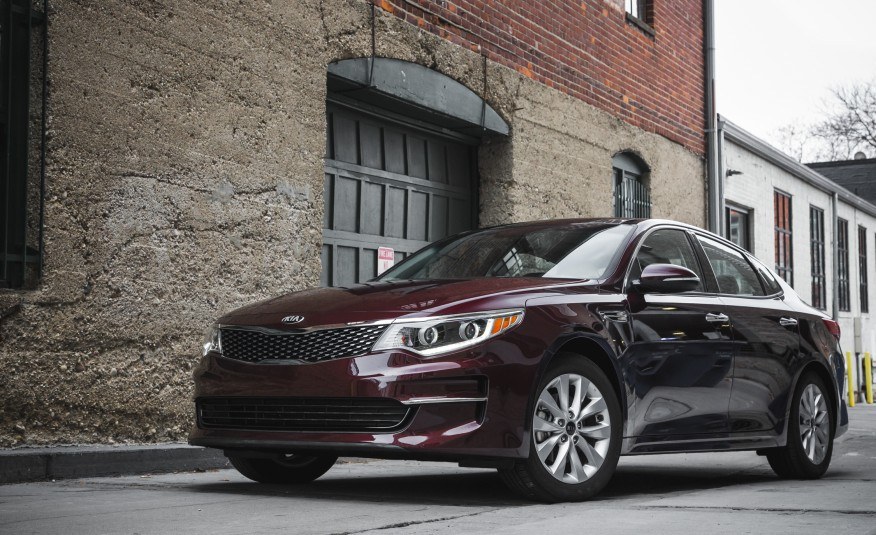 With 185 horsepower and 178 lb-ft of torque, the 2.4-liter’s output is on par with the four-cylinder engines in competitors such as the Honda Accord and the Mazda 6. Paired with a six-speed automatic transmission, it pulled our 3399-pound Optima EX test car from zero to 60 mph in a respectable 7.5 seconds, and it returned 25 mpg over 800 miles of mixed driving. The engine generally is quiet and unobtrusive—until you mat the accelerator, and at higher engine speeds, the sound skews toward gravelly and unrefined. The engine also sometimes miscommunicated with the transmission, with quick throttle inputs occasionally prompting a stumble and a delayed downshift.

It’s Got the Goods

This is perhaps overstating the powertrain’s foibles, but however minor the issues, they’re what keep the 2.4 behind the Optima’s better turbo engines. Luckily, every Optima has a lot to offer elsewhere, with a handsome exterior and an understated but highly functional interior. In EX trim, the Optima is ideally equipped for its $25,840 base price, with dual-zone automatic climate control, USB and 12-volt power outlets front and rear, leather upholstery, heated front seats, a heated steering wheel, a power driver’s seat with memory function, a backup camera, and a 5.0-inch touchscreen display. 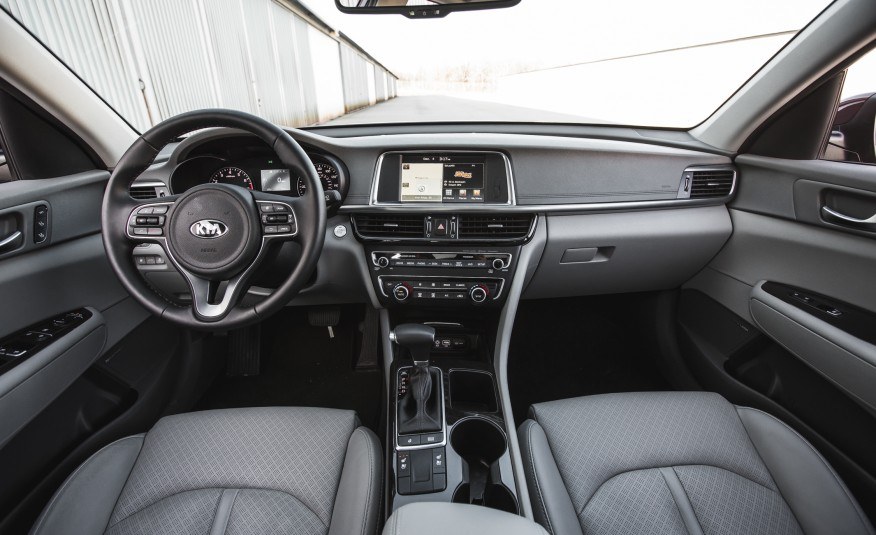 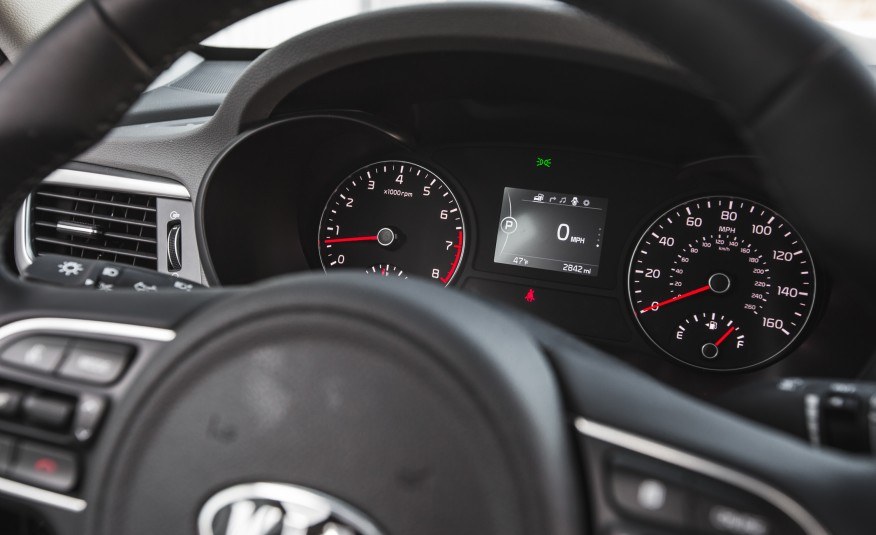 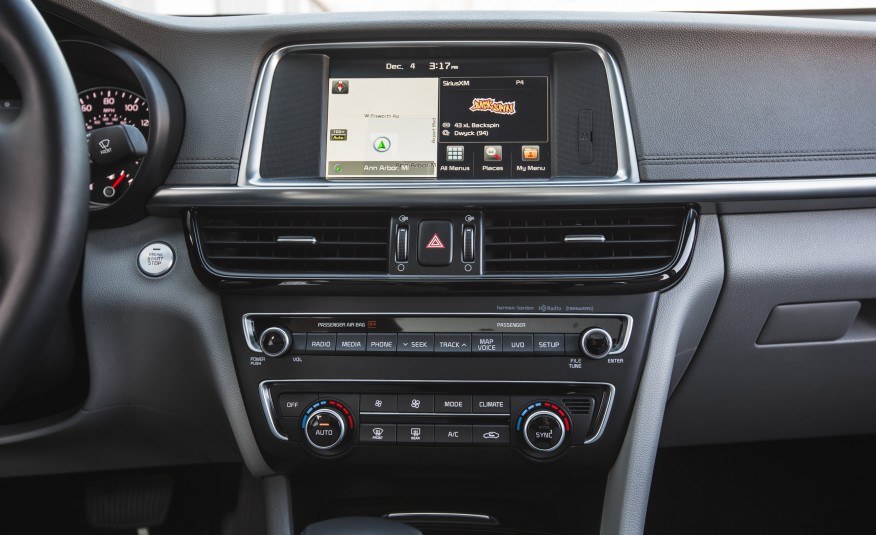 For that price, the Optima EX is just a damn good sedan. The suspension mixes appropriate comfort with generally buttoned-down movements. It isn’t sporty, having pulled only 0.83 g around a 300-foot skidpad with mild understeer, but the steering faithfully follows inputs without being darty. Like most cars in this class, the Optima’s steering is light on feedback, but the slightly heavy weighting gives the impression of solidity, and it tracks straight on the highway.

The interior is spacious and upscale—particularly the Mercedes-like patterned perforations on the leather seats—and Kia’s large touchscreen is easy to use, if a bit of a reach for the driver. The detail-oriented will appreciate how the typefaces, color schemes, and layouts of the Optima’s hard buttons, dials, gauge-cluster driver-information screen, and dashboard display match to form a cohesive environment. This sort of rigor is often lacking in cars twice the price; even the Honda Accord, a 10Best Cars stalwart, fails this exam, utilizing two dashboard screens (one atop the other) with differing pixel counts and menu styles.

It’s too bad folks are flocking to crossovers like pairs of animals to Noah’s Ark, because the typical nuclear family would be well served by the Optima’s useful space for humans and cargo. A standard 60/40 split-folding rear seat can be dropped flat, a rarity in sedans. We fit a six-foot Christmas tree through the pass-through without it touching the front seats, and the trunk on its own is big and usefully shaped. The Optima is a sedan that does everything quite well, even though it doesn’t do any one thing exceptionally. There are better engines in the Optima range than the one in our test model, but there are few better mid-size sedans on the whole.