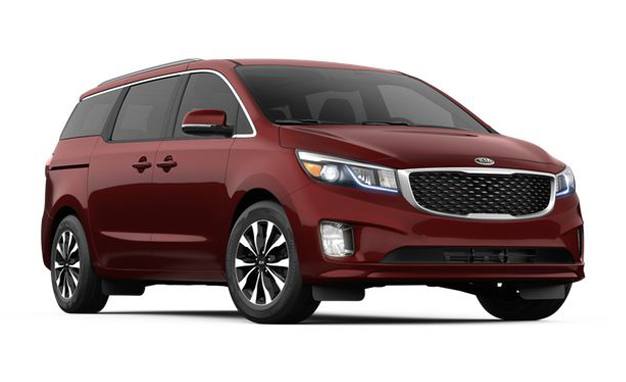 Snazzy, sporty, and striking aren’t words you associate with minivans—but the ambitious folks at Kia have managed to bake a little of each into the Sedona. With room for eight, storage for family necessities, and a long list of standard and optional safety features, the Sedona is a compelling choice for value-minded shoppers. Powered by a 276-hp V-6 with a six-speed transmission and boasting a smooth ride, the Sedona also injects a little fun into daily kid-ferrying duties. 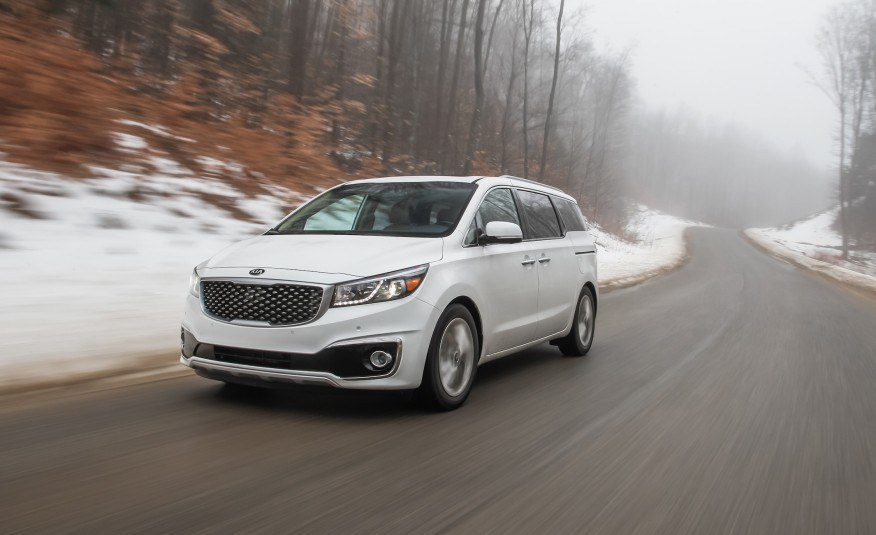 We have a go in the segment’s interloper.

As the minivan segment has matured, all-new entries have become increasingly rare as the Honda, Toyota, and Chrysler troika continue to dominate. Case in point: Kia is offering the only completely new minivan for 2015, and it’s the Korean brand’s first new vehicle of the type since 2006.

The 2015 Sedona is likely to find its way into the lives of more families this year—and not just those sidling up to the rental counter, where the old version often ended up, orphaned and unloved. That’s because the latest model is a massive departure from its predecessor in terms of design. Nine years ago, Kia’s aesthetics reminded us of creatures emerging from the primordial goo. Today, the entire brand looks very different, and from the Forte to the Optima, the Cadenza to the Sportage, Kia’s showrooms are full of handsome vehicles. The Sedona fits in and is arguably the best-looking minivan for sale today—although that’s not a hard contest to win. That said, there’s little frumpiness to the styling, with large wheels sitting nearly flush with the body, panel gaps that are tight, and a third-row window that tapers with a sense of drama foreign to the segment.

Overall, the interior design didn’t have us fawning, but the look mimics the clean lines of the exterior. And, aside from a few hard plastic pieces at the top of the instrument panel, the interior comes across as expensive—at least in the Limited model we tested. Two-tone leather seats, gloss-black trim, and thoughtfully designed gauges are all typically the purview of premium brands, yet here they are in a Kia minivan. The radio and HVAC controls are simple and intuitive, and the touch-screen navigation system works quickly and logically. We were slightly annoyed by the fixed console between the front seats, though, as it’s removable in most vans to allow for easier cleaning, additional storage opportunities, and passing through to the rear cabin. 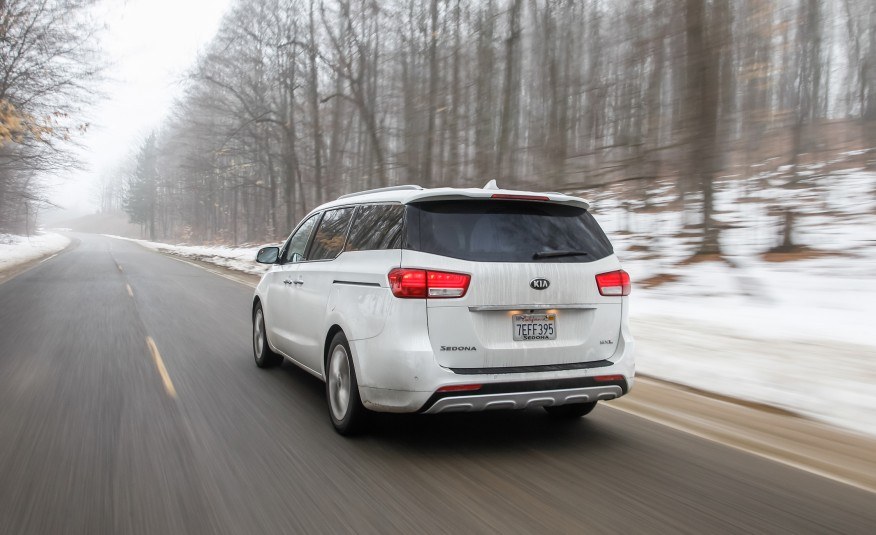 Minivans aren’t purchased for their looks, though. What a minivan needs to do really well is haul humans and cargo. The Sedona’s cargo capacity maxes out at 142 cubic feet, which falls a little shy of the Toyota Sienna’s 150 cubic feet and the Honda Odyssey’s 149 cubic feet. Total space for passengers comes in at 158 cubic feet for the Sedona, versus 156 for the Sienna and 170 for the Odyssey.

Little effort is required to drive the Sedona. The steering is light and the van is remarkably maneuverable thanks to the 36.8-foot turning circle. Outside of the parking lot, the suspension is supple despite our Limited’s 19-inch wheels, and the 276-hp 3.3-liter V-6 delivers its power with creamy indifference. We had experienced downshifts that lacked smoothness in one Sedona, but a second example we piloted performed the same action with the silkiness of a Lexus ES350. The 3.3-liter V-6 is standard on all Sedonas, but the fuel economy varies depending on trim level. The Sedona L, LX, and EX return EPA figures of 18 city and 24 highway, while opting for the SX trim level boosts the highway number to 25 mpg. Go for the heaviest, biggest-wheeled Limited, however, and EPA fuel economy falls to 17 city and 22 highway. In our hands, the Limited went 20 miles on every gallon of gasoline.

Acceleration is strong for a minivan. Our Sedona Limited hit 60 mph in 7.4 seconds and crossed the quarter-mile mark in 15.8 seconds at 91 mph. Once rolling, moving from 30 mph to 50 takes 4.0 seconds and the run from 50 mph to 70 takes 5.0 seconds. Minivans might not be purchased for their drag-racing chops, but the Sedona’s power and passing times make merging onto a freeway with the soccer team aboard a bit less stressful. 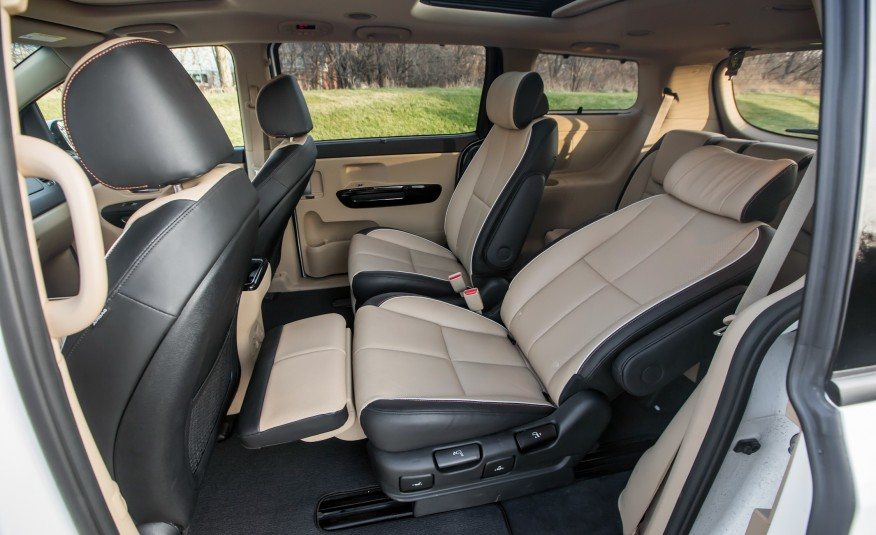 While we rank engine power as an important safety feature, minivan shoppers likely will be more interested in the Sedona’s collision-warning system, blind-spot monitoring, and 360-degree camera views. The blind-spot alarms plus a rear cross-traffic alert system are standard on the Limited and SX and optional on EX (the L and LX can’t be fitted with these features). Front-collision warning, adaptive cruise control, and lane-departure warning are available only on the top Limited trim level. Unlike the collision-warning system in the latest Sienna, the Sedona’s will not automatically apply the brakes. We’re okay with that, though, considering the 4772-pound Sedona stopped from 70 mph in a sports-sedan-like 167 feet.

Sedona pricing begins at $26,995, at which point the sliding doors don’t move on their own, the seats are cloth, and there’s no rearview camera. Moving up through the Sedona hierarchy adds leather seats, power doors, additional paint colors, the backup camera, power folding mirrors, larger wheels, navigation, and more. Check all the boxes and you’ll end up with a Sedona Limited like our test car and a price tag creeping into the mid $40Ks, but a well-equipped, leather-lined EX can be yours for $33,195.

Kia’s new minivan might not be the obvious choice in the segment, where Honda, Toyota, and Chrysler are the blue-chip players. But the Sedona’s styling—and its value-oriented pricing—just might be enough to bring families into a Kia dealership. After all, it’s a formula that has worked for most of the brand’s other cars.