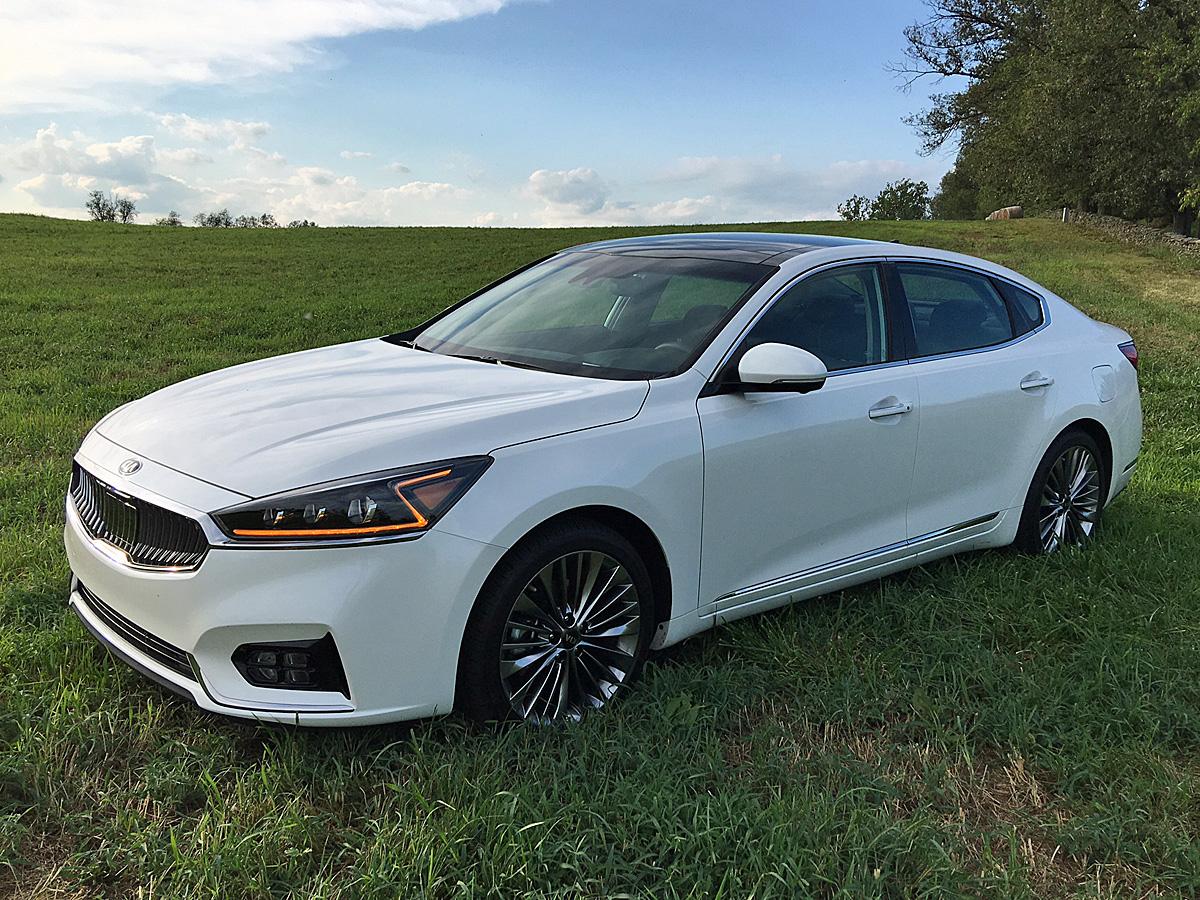 Roughly 50 miles west of Washington, D.C.’s power suit gridlock lies Middleburg, Virginia, an historic town with a name referring to its founding location as a midway point between the Northern Virginia cities of Alexandria and Winchester. With a history steeped in stagecoaches and Civil War campaigns, Middleburg today is more middle-of-nowhere, a secluded destination for wine tasting, equestrian training, and celebrity hiding. And this escapist luxury enclave of fewer than 1,000 residents is where Kia decided to launch the second generation of its premium large sedan, the 2017 Cadenza.

Is this a bold move for the mass-market automaker? Not if you’ve been paying attention in automotive history class.

In 1994, Kia entered the U.S. market with two vehicles – the Sportage compact SUV and Sephia compact sedan. But like K-pop artists, a hometown hit doesn’t necessarily translate well in overseas markets, especially one as coveted yet hard-to-crack as North America. The Korean automaker was not without additional struggles, either, ranking a dismal bottom-of-the-barrel last in the 2001 J.D. Power Initial Quality Study (IQS).

Whether sparked by newfound determination or because the company was just too stubborn to fail, this year’s IQS presented a different result: Kia ranked on top for quality, marking the first time for a non-luxury automaker has led the study in 27 years. Who was in second place? Porsche. 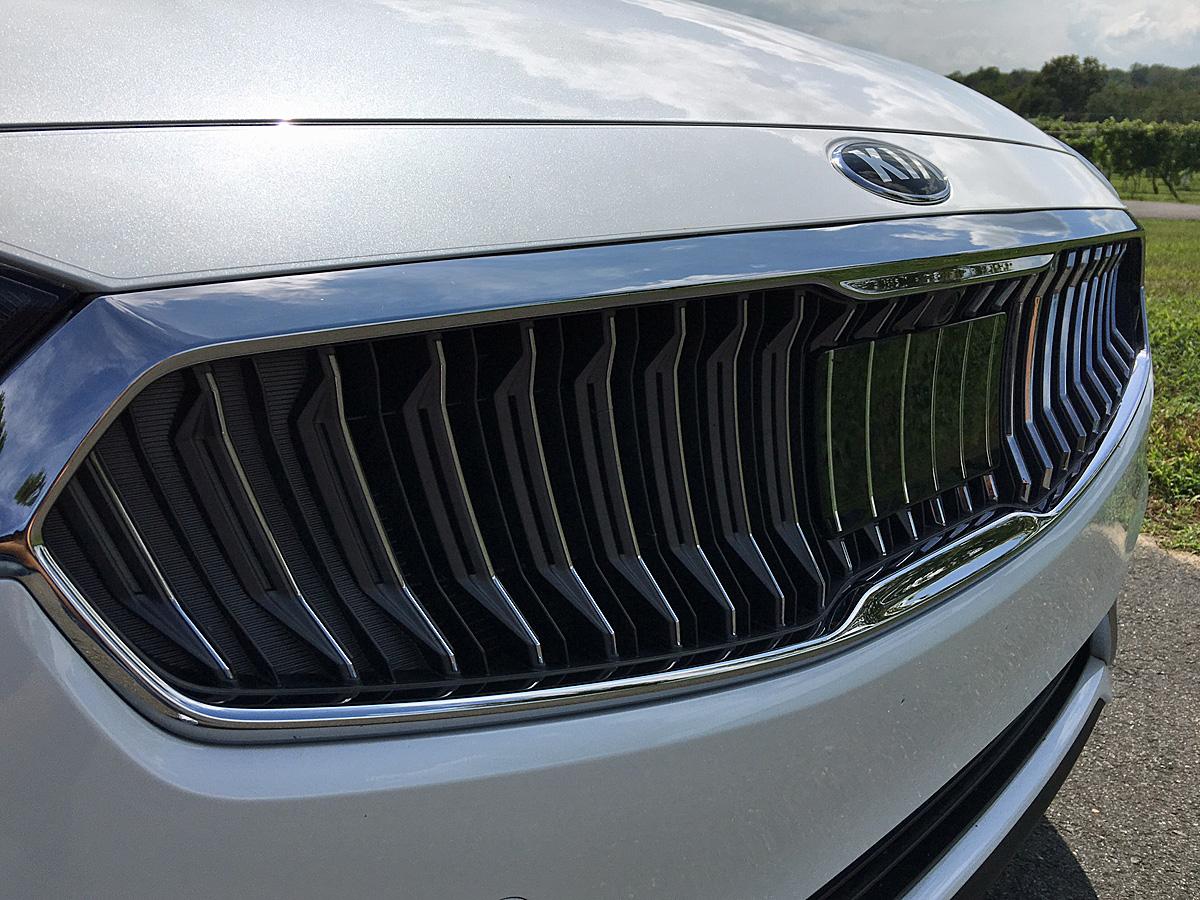 A key element of Kia’s renaissance has been its willingness to take risks, and styling has received a significant portion of this dedicated effort. No longer would Kia be known for producing nondescript designs or failed mishmash imitations of existing cars (see: Amanti).

Enter Peter Schreyer, the design chief responsible for Audi’s art-on-wheels attitude. Since 2006, Schreyer has been instrumental in bringing Kia out of the design doldrums and into the award-winning spotlight. And in a segment full of snooze-worthy shapes, the all-new Cadenza is distinctly photo-shoot-ready.

Current automotive design themes generally employ sinuous curves to create their visual appeal, but Kia is following a straight-line approach to styling. Literally. Schreyer’s design philosophy emphasizing the “simplicity of the straight line” is clearly evident in the redesigned 2017 Kia Cadenza. Spanning the length of the new Cadenza, this linear detail is linked with Z-shaped lighting patterns in the headlights and taillights, creating a crisp, elegant look as opposed to the frequently overcompensating character lines of other brands.

Another neat yet subtle detail is the new “piano key” lighting elements of the LED taillights, which create impressive visual depth and pair nicely with the Z-shaped lighting signatures. Plus, because it is lower, wider and lengthier than the car it replaces, the all-new Cadenza’s profile is even more composed.

Even though the Cadenza’s length remains the same at 195.7 inches, a 0.4-inch wheelbase growth spurt allows for nearly half an inch more legroom for rear passengers. Kia also extends the roofline more than two inches to improve overall rear seat space. Adding to the vehicle’s low-slung stoutness, a slight reduction in height and nearly an extra inch of width in the hips gives the Cadenza a more substantial and masculine appearance, even on the Snow White Pearl vehicle I tested.

What doesn’t quite work, at least some of the time, is the new “Intaglio” grille design used for the higher trim models. Featuring concave vertical blades, the grille’s snarl reminds me of Pennywise the Dancing Clown, star of Stephen King’s horror novel “It” and, thanks to the television mini-series based on the book, also of many 80s children’s nightmares (myself included).

Childhood traumas aside, the Cadenza is still an overall beautiful car, a standout in the full-size sedan segment. Just don’t expect me to park it near a sewer drain. 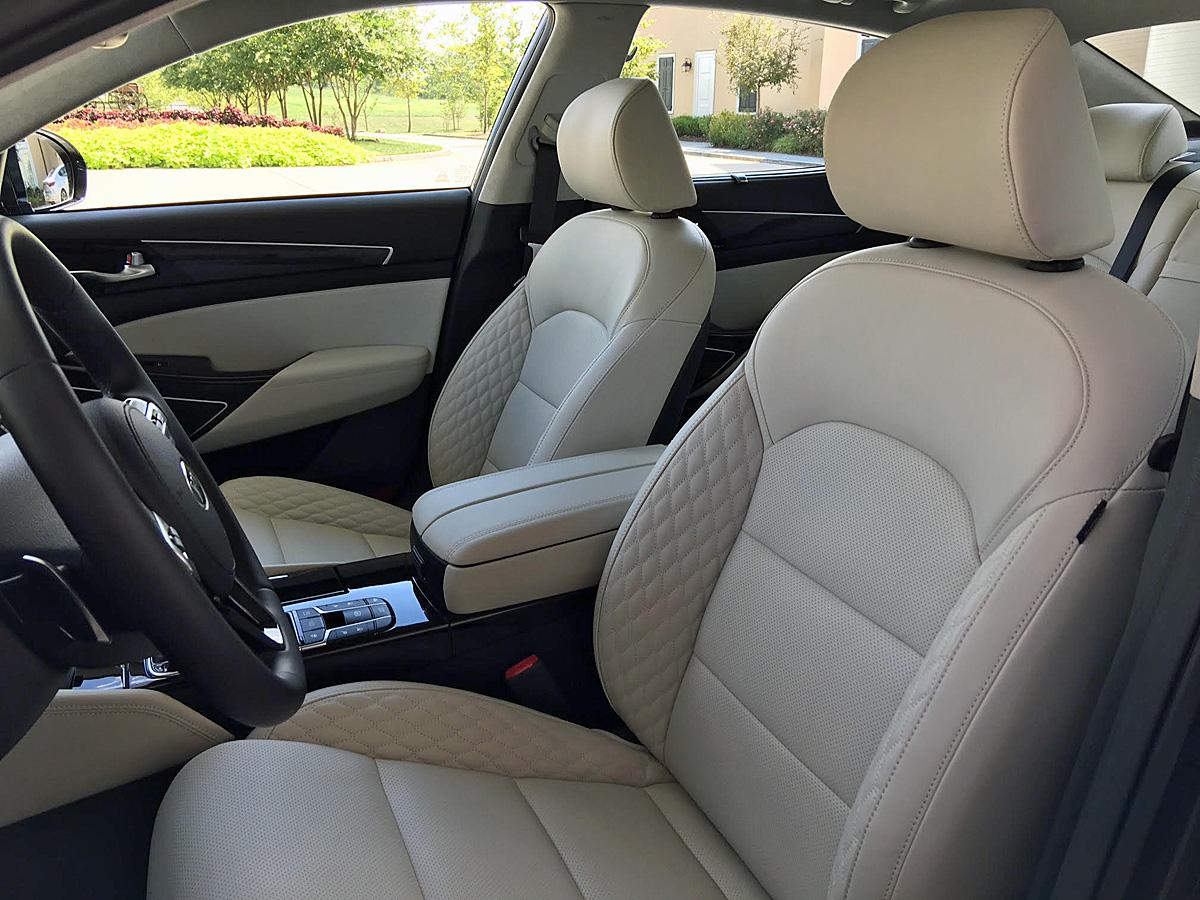 The Cadenza’s interior, which Kia claims boasts the most passenger room of its segment at 107.8 cubic feet, receives a sophisticated redesign with higher quality materials, soft-touch surfaces and useable storage spaces throughout.

The leather-trimmed seats are roomy and, with the available height and travel adjustments, can suit people of all sorts of sizes. Standard only on the Limited trim level, premium Nappa leather seats feature new diamond-quilted seat bolsters, which look fantastic in the also-new-for-2017 dark brown interior color. (Pretty much any color, really.) Kia’s designers certainly score beaucoup luxury points with this high-end detail.

Though the wraparound dashboard appears expansive, reaching for control knobs or tapping the infotainment display screen is never a stretch. The center control panel is uncluttered and outfitted with a standard 7-inch color display with a rearview camera in lower trim levels, while higher trim levels receive the larger 8-inch touchscreen with a navigation system. All Cadenzas come with Kia’s UVO infotainment technology as well as Android Auto and Apple CarPlay smartphone projection systems. And with available wireless smartphone charging, may boredom never be your road trip buddy.

As is the Kia way, the all-new Cadenza offers a myriad of premium standard features regarding comfort, technology and safety. Numerous optional adds are also available, from a 630-watt Harman Kardon 12-speaker surround sound system to the Kia-first Smart Blind Spot Detection system, which, when sensing unintentional drifting toward an adjacent vehicle, will automatically brake the opposite-side front wheel to keep the Cadenza centered its intended lane.

Especially when its competitive set includes the Toyota Avalon, you can hold no preconceived notions that the 2017 Kia Cadenza is a sports sedan. Still, I couldn’t help but hope for a bit more fun behind the wheel from the brand which now offers turbocharged engines alongside its dancing hamsters. Now that I’ve spent some quality time in the Cadenza’s driver’s seat, it looks like settling for the car’s sophisticated handling will just have to do.

All Cadenzas feature a 3.3-liter V6 engine producing 290 horsepower at 6,400 rpm and 253 pound-feet of torque at 5,200 rpm. Paired with a new 8-speed automatic transmission, the 2017 Cadenza is estimated to get 23 mpg in mixed driving. And whether rolling on the standard 18-inch alloys or optional 19-inch versions, the Cadenza will still look striking during every fuel stop.

Compared to the new Buick LaCrosse, the other redesigned full-size car arriving for 2017, the Cadenza was just as composed on meandering streets and highways but more resistant to carving curves. Unlike the Buick, the Kia felt somewhat heavier to steer the tighter the corner. While not necessarily unhappy about being hustled, the Cadenza wasn’t exactly thrilled when pushed, either.

One goofy thing both my co-driver and I experienced was unintentionally hitting the steering wheel-mounted controls. More than once, he changed the vehicle information screen displaying the odometer and trip (which we needed to navigate the drive route), while I made unplanned wake-up calls to friends still snoozing in their respective time zones. Perhaps the buttons are a tad too sensitive.

The ride itself was exceptionally smooth and as quiet as a library in a retirement community. The 8-speed automatic transmission shifted with little complaint and such driver-assistance aids, like the Advanced Smart Cruise Control, proved unobtrusive. For example, I forgot the cruise control system was even on because when downshifting and braking to accommodate for slower traffic ahead, the vehicle did not shudder, lurch or do anything glaringly noticeable as it automatically made speed adjustments.

Drivers and riders alike will have few, if any, objections to the Cadenza’s suspension tuning and structural rigidity. Feel free to take the long way home, or to embark on an impromptu road trip. Just set a timer to remind yourself to take a break as you could end up so comfortable that you forget to stop and stretch. 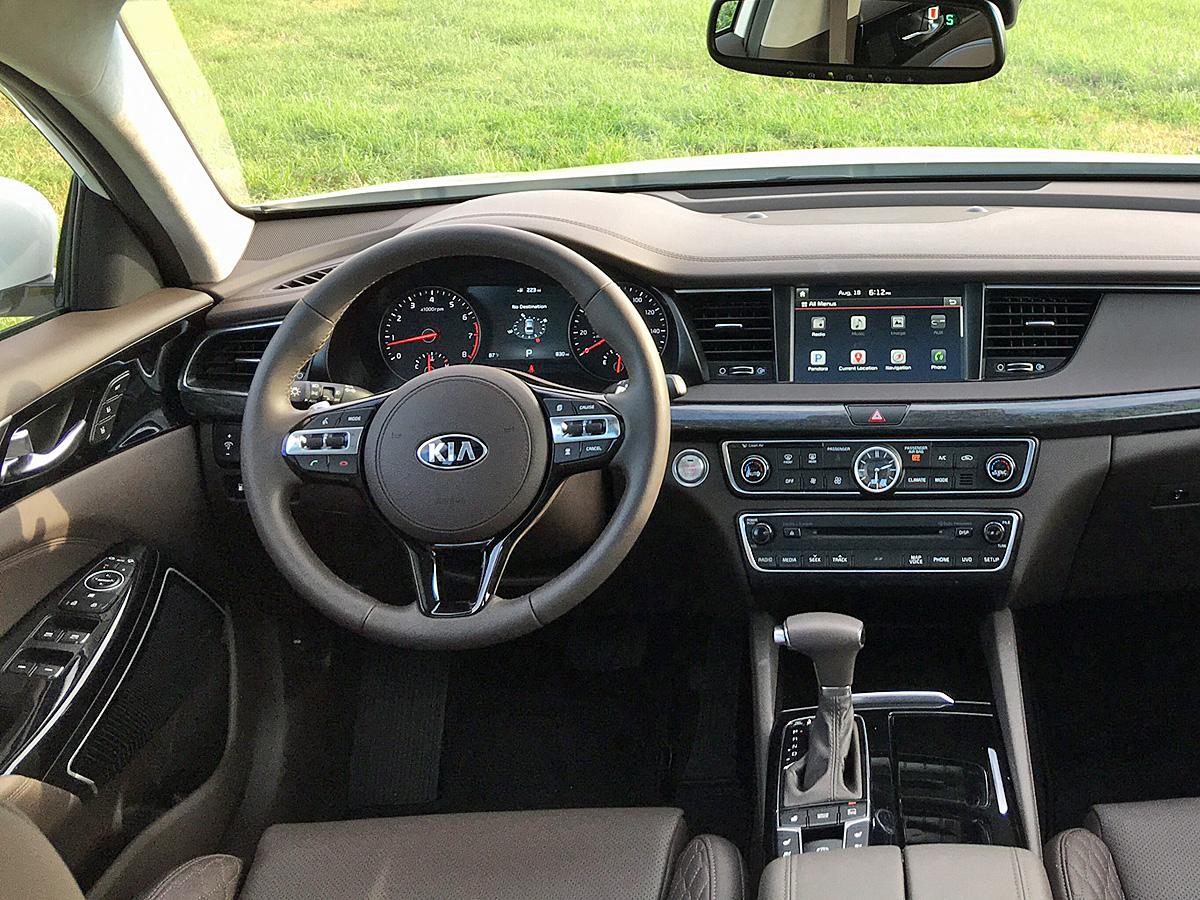 On sale in October of 2016, the 2017 Kia Cadenza will again be offered in three trim levels – Premium, Technology and Limited – with an estimated starting price of $32,000. Surprisingly, that sum is nearly $1,000 less than the outgoing model. Final pricing will be announced closer to the on-sale date but expect the Technology and Limited models to be priced around $39,000 and $44,000, respectively. Destination charges will be an additional $895.

Not long ago, Kia vehicles were unimpressive, indistinguishable, virtually invisible copycat cars to which few consumers paid much attention. Those days are long gone, a fact made more apparent with the introduction of each new and redesigned model. The 2017 Kia Cadenza is merely the latest example of the company’s hard-fought effort to reinvent itself, and consumers will only continue to benefit as the automaker writes each new chapter of its history.