Kia is adamant there are no compromises with the electric Soul. It’s comfortable, quick, nimble and versatile 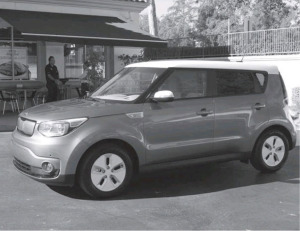 *The only visible difference on the electric Soul is that there is no grille, but instead a plastic hatch that pops open to allow access to the charging socket. *

A vehicle bought by only the few brave enough to schedule their driving around a limited daily range? A vehicle that can’t be fixed easily by your neighbourhood mechanic, and which is priced out of range for those Canadians who don’t live in Ontario or Quebec, where they can claim provincial rebates?

Kia clearly thinks so, which is why I’ve been tooling around Southern California in the new Kia Soul EV, a totally electric version of its popular compact car.

The electric Soul — and that’s a great name, but not official — is pretty much identical to the gas Soul, which as several wags have already noted, must be pronounced with care in polite company.

Its dimensions are all the same, save for an inch of raised interior trunk space to accommodate the batteries under the rear floor. From the outside, you’d never notice a difference, except there is no grille but instead a plastic hatch that pops open to allow access to the charging socket.

The drive is very different, though. Like all electric vehicles, the Soul’s single-gear motor creates maximum torque from a standstill, unlike gas vehicles, which must be revved until they find their powerband.

So just like a golf cart, I stepped on the throttle and shot off into California.

The car is a lot quicker than a golf cart, with a top speed of145 km/h. It’s apparently four seconds faster from zero to 100 km/h than its main competition, the Nissan Leaf. Another driver told me he could chirp the tires, but I could not. It was probably more a reflection of their “superlow-rolling-resistance” rubber, anyway.

Once underway, the Soul would be completely quiet if it did not have small external speakers that make a kind of muted throbbing noise to warn pedestrians of its presence. It sounds like the slapping of tires on a ridged road and can’t really be heard inside the car.

Kia is adamant there are no compromises with the electric Soul. It’s as comfortable, quick, nimble and versatile as the — ahem — gas Soul.

If you live in Ontario, which offers an $8,500 government rebate on electric cars, it’s even comparable in price to the high-end model: the basic Soul EV lists for $34,995 before any rebate, while a loaded Soul EV, with synthetic leather seats, fog lights, 480V fast-charging ability and a heat pump for slightly greater range, is $37,995. The conventional Soul starts at $16,995 and climbs to $27,295.

That rebate’s not going to last forever, though. The Ontario government won’t say how long the program will continue, and it was rumoured last year to be ending soon. A similar program in British Columbia offering a $5,000 rebate is already finished after funding ran out in March.

Of course, there is a compromise, and it’s a biggie: the Soul has an official range of 149 kilometres at the most before its batteries must be recharged. This is the official Canadian distance evaluated under the same five driving conditions the government uses to determine fuel consumption, and it trumps the Leaf’s 120 kilometres. The car boosts its range with several clever features: the heat pump on the higher trim level creates up to 27 per cent more battery power from generated heat, and as with the Leaf, the energy-sapping heater and air conditioning can be set to preheat or cool the cabin while the car’s still plugged in. As well, only the driver’s portion of the cabin can be heated at the footwell, and the temperature of the intake air is carefully monitored. Every little bit helps. The driving range can be tempered with fast and convenient charging, and for some people, it just won’t be an issue. City dwellers with access to a fast charger (which rules out plenty of condo residents) probably will be quite content with such an urban range if the Soul can be plugged in every night. On those few occasions they need to drive farther, they can rent a conventional car. Kia Canada is supplying a 240V fast charger free with every Soul EV, and there’s currently a government rebate that offers up to $1,000 toward a charger and its installation, which might cover it. With the 240V, 30-amp charger, a full battery charge takes less than five hours, which isn’t too bad. In contrast, a 120V household plug will take 25 hours to charge from totally flat to 100 per cent. Even faster charging is possible at a 480V commercial outlet that takes just 24 minutes for an 80 per cent charge — in theory, you could plug in at your local mall and be completely charged after visiting the stores. Good luck explaining yourself, though, if there’s only one charger and another EV wants a boost. Have you ever seen pump rage when people have to line up for gas? In practice, the Soul I drove had a range of 125 kilometres — there were only 15 kilometres left after a 110kilometre road trip, and my car was equipped with the 27 per cent boost of the heat pump. In its defence, everything was stacked against it: it was a hot day, and I cranked the air-conditioning and cooled seats while I drove it like I stole it. It was easy to drive this way. The electric Soul is fun and forgiving and seemed right at home beside California’s beaches and fruit bars. Kia hopes to sell 5,000 of them next year in Korea, Europe and North America, and there’ll be 11 dealers in Canada equipped to sell and service them, including three in the GTA.

How many actually sell is a whole different question. Travel expenses for freelance writer Mark Richardson were paid by the manufacturer.