Kia has been known for value and a very long warranty, not as much for world-class design. But the Optima could be among the more stylish sedans on the road. By TOM VOELK/DRIVEN on Publish Date November 18, 2015. Photo by Kia Motors America.

BEFORE the Nike Air Jordan, there was the Converse Chuck Taylor — a classic design that stood the test of time. But even the classics evolve. Chucks were recently tweaked to be more cushioned and comfortable.

The Kia Optima may not be a classic, but, like Chuck Taylors, it’s among the most stylish cars, regardless of price. Now, the designers of the sleek new-generation Optima have been careful not to mess with a good thing.

Still, cars must be more than just good-looking. Affordability, comfort, safety, fuel economy and reliability are all important. The departing third-generation Kia was a solid effort, with road noise and the lack of steering feel being its biggest foibles.

A few miles in, the new Optima proves those shortcomings have been addressed. The more mature driving dynamics have risen closer to the expectations set by the svelte exterior lines. Think Air Jordans, not Chuck Taylors. And the Optima is more hushed now.

A cleaner — I’ll argue less emotional — cabin replaces the cockpit vibe of the previous generation. Eyes and fingers will appreciate the materials in the SX model tested, save for the fake molded-in stitching on the instrument panel. Real thread can be had on the highest SX Limited trim level. 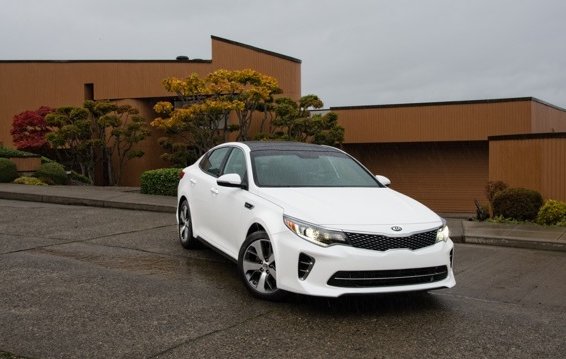 Room and comfort are not an issue. In back, three average adults will be fine. Outboard passengers get rump roasters with 12-volt and USB ports for charging phones. There are even side sunshades.

Starting at $22,665, Kia has abandoned the bargain-basement pricing for a bang-for-the-buck approach. As tested, the SX at $33,215 is stuffed with a panoramic glass roof, heated steering wheel, heated and vented front seats and an iPad-like interface. Many of these features are not offered on the Altima, Accord, Camry, Fusion and Mazda 6. Spend more and the Optima can be had with auto emergency braking, adaptive cruise control and a surround-view camera system.

There are several 4-cylinder engine choices. SX gets the most powerful — a 2-liter turbo making 245 horsepower and 260 pound-feet of torque with regular-grade gas. This engine and the 2.4-liter nonturbo motor are bolted to a 6-speed automatic that turns the front wheels. Optima’s 1.6-liter turbo engine gets a 7-speed dual clutch. Drive modes adjust throttle response and steering weight.

It takes about seven seconds to nail 60 miles an hour from a standstill. Turbo lag and torque steer (that tugging of the steering wheel under hard acceleration) are all but eliminated. Optima closes the handling gap on the Accord and Mazda 6. Know that the SX uses a different steering rack setup than lower models.

The SX scores 24 miles a gallon in the city and 35 on the highway, according to the Environmental Protection Agency. Go with the 1.6-liter turbo engine and that rises to 28 and 39. I saw 24 in heavy city driving.

Some will grumble that Kia played it too safe with the new Optima’s design. On the other hand, its sister car, the Hyundai Sonata, took a strikingly conservative turn and was criticized for it. Kia kept Optima’s strengths and eliminated the weaknesses. That’s a good-looking strategy for taking on the competition.